A Stir-Fried Journey Through China

An unforgettable culinary tour of modern-day China describes the author's decision to enroll in a local Beijing cooking school, her progress from cooking student to intern at a chic Shanghai restaurant, the colorful characters she meets along the way, and China's culinary heritage and modern-day cuisine, accompanied by thirty-two authentic recipes.

NPR stories about Serve the People

July 23, 2008 • What happens when an entrenched culture suddenly opts for rapid change and the upheaval of centuries of cherished tradition? Maureen Corrigan finds some answers in two new works of nonfiction. 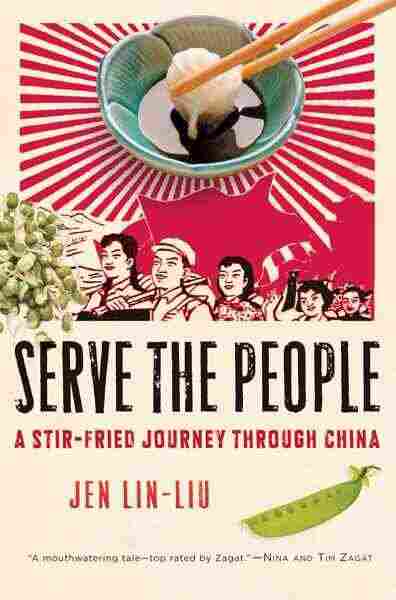 In cooking class, I learned a startling array of facts: Eating fish head will repair your brain cells. Spicy food is good for your complexion. Monosodium glutamate is best thrown in a dish just before it comes off the wok. Americans are fat because they eat bread, while Chinese are slim because they eat rice. If you work as a cook in America for three years, you can come back to China and buy a house.

I bicycled down a narrow alley, past a public toilet and through a gate with a scowling security guard to get to the cooking school. I enrolled in October 2005, in my fifth year of living in China. Lectures were held in a classroom rented from a high school, and the unheated room felt colder by the minute. Everyone else was used to the lack of heat and insulation in public schools and dressed accordingly, in down jackets. I shivered in my thin coat.

My classmates slumped in their seats, seeming bored and detached, holding their pens limply. They were all men, ranging in age from twenty to fifty. Most hadn't completed high school. Teacher Zhang didn't mind that they answered their cell phones in class. Once I heard a student clipping his fingernails, the snip of the scissors punctuating the cadences of the lecture. Teacher Zhang often narrowed his eyes at me while he spoke, however. He didn't like that I was different from the others.

I interrupted him with questions. I didn't bother to raise my hand because that custom didn't exist in this classroom-students weren't supposed to have questions. So I just spoke up, as loudly as I could. "Could you write that character more clearly?" I often asked.

Teacher Zhang grunted and wiped the chalkboard with the back of his hand, then rewrote the character in the Chinese equivalent of block letters, the chalk screeching against the surface.

Sometimes I was so busy copying down what Teacher Zhang said that I didn't stop to question it. Later, reviewing my notes, I discovered a strange mix of pop psychology and old Chinese clichés.

"If you're a farmer working in the fields and doing a lot of heavy lifting, your taste buds will be different from someone who works in an office," he added. Uh-huh, I thought as I transcribed the information into my notebook. Looking back on my notes later, I wished I had asked him to elaborate further.

But when I asked questions, Teacher Zhang shot me annoyed glances, and the other students shifted uncomfortably in their seats. I learned to behave like the rest: listen, bow, and copy.

When we weren't in the classroom taking notes on the world according to Teacher Zhang, we were in the kitchen. The kitchen was created out of another classroom by installing a burner, gas tank, countertop, sink, and refrigerator. With those simple fixtures, it became a larger version of the typical home kitchen in China. Though spacious, it wasn't the kind of room where you let your eyes wander, lest they settle on a patch of scum on the tile wall that had probably not been scrubbed for a good five years. I figured the time we would spend in the kitchen learning real things would make up for the time wasted on the lectures. I had never been in a professional Chinese kitchen, which was notoriously off-limits to diners. I now found myself in a room full of cutting boards, woks, cleavers, and bottles of chili oil and oyster sauce. But I quickly found out that even in this kitchen, certain things were not permitted to students. Like cooking.

Instead of cooking, we sat on a set of bleachers across the room, observing Chef Gao's every move. Chef Gao was an old-school chef who worked at a Soviet- style, government-run hotel that had seen its glory days pass with the end of the state-planned economy. Gao was a relic of the old system, and he continued the time-honored Chinese traditions of using MSG and copious amounts of soybean oil. Despite the MSG and the oil-or maybe because of them-his cooking was delicious.

We watched as Chef Gao fanned out his skinny arms and elbows like a grasshopper as he cooked. We listened to him chirp the recipes in a folksy Beijing accent as he wrote them on the chalkboard, dividing the ingredients into three categories: main ingredients, supplementary ingredients, and seasonings. Occasionally, he noted quantities next to the main ingredients, but usually he threw things in by intuition. The kitchen didn't contain a single measuring cup or spoon anyway.

We scrutinized his equipment, which was limited to a wok, a cutting board, and a cleaver with an eight-inch-long and four-inch-tall blade. Once in a while he'd pull out something more sophisticated, like a fryer basket. "You see this basket and handle? It's all one piece, so it will never break. I bought this in the 1960s, and the factory has been closed for years. They don't make baskets like this anymore!" he hollered with a disdain that suggested that the old days, when China was dirtpoor, were better.

We gazed, captivated, as Chef Gao demonstrated his skills at the wok. He lined the curved pan with thin slices of pork tenderloin that had been marinated in rice wine and placed it over a moderately high flame, swirling the juices around. When one side was cooked, he picked up the wok and flipped the pork in a single sheet, like a pancake. He repeated the maneuver-swirl, flip, swirl. Seasoned with leeks and ginger, this tender and flavorful guota liji (sunken-wok tenderloin) displayed the fundamentals of Chinese cooking: freshness and simplicity above all else.

When all the day's dishes were cooked, we went into action. We jumped off the bleachers, gathered around the cooking station, and swooped in with chopsticks that we had brought from home, attacking the food with a unified strategy. The smallest dishes went first, especially expensive items like seafood. We moved on to the dish giving off the most steam, and then we finished off the rest. In three minutes flat, everything was gone. At the end of one class, I barely beat someone to the last skewer of deep-fried scallops. He ended up with an empty stick as the scallops slid off into my greedy grasp. I had already learned that I couldn't stand around waiting for anything to be handed to me.

Marinate the pork in 1 tablespoon of the rice wine, 1/4 teaspoon of salt, and 1/4 teaspoon of pepper for 10 minutes. In a bowl, beat the eggs and set them next to the stove.

Place the flour on a plate. When the pork has marinated, coat each slice with flour on both sides, patting to remove the excess. Set the slices on a plate next to the eggs.

Place a wok over medium heat and add 1/4 cup of oil, swirling it to coat the sides. When the oil is hot, quickly dip each piece of pork in the beaten egg and place it in the wok, arranging the slices so they cover the bottom and sides in a thin sheet. With a spatula, gently loosen the pork, then drizzle a little oil around the wok from time to time so the meat doesn't stick as it cooks. When the bottom of the pork sheet has turned a light golden brown, flip it over. (Don't worry if it doesn't flip in a single sheet; just make sure to turn over each piece.) Add any remaining oil, the remaining 1 tablespoon wine, the rest of the salt and pepper, and the chicken stock.

Sprinkle the shredded leek and ginger over the pork, and drizzle sesame oil over all. When the second side of the pork is browned, remove the wok from the heat and slide the pork onto a plate. Serve immediately.