Adventures in the Culinary Underbelly

New York chef and novelist Bourdain recounts his experiences in the restaurant business, and exposes abuses of power, sexual promiscuity, drug use, and other secrets of life behind kitchen doors.

August 6, 2006 • Before he opened his own place (a bar and restaurant in Santa Monica, Calif., called Father's Office) Sang Yoon served up gourmet cuisine at Michael's. As our series of summer reading chats continues, he reveals a taste for books about eats. 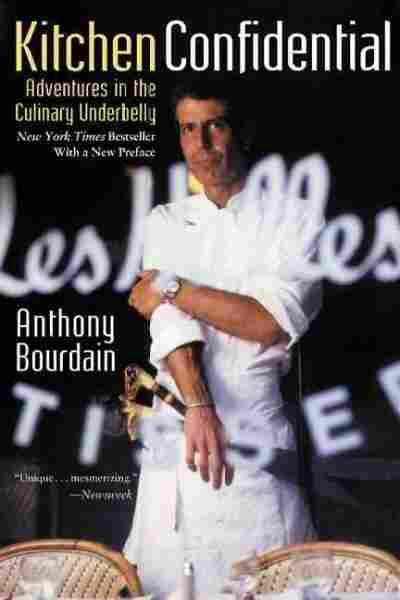 My first indication that food was something other than a substance onestuffed in one's face when hungry — like filling up at a gas station — came afterfourth grade in elementary school. It was on a family vacation to Europe, on theQueen Mary, in the cabin-class dining room. There's a picture somewhere: mymother in her Jackie O sunglasses, my younger brother and I in our painfullycute cruisewear, boarding the big Cunard ocean liner, all of us excited aboutour first transatlantic voyage, our first trip to my father's ancestralhomeland, France.

It was the soup.

This was something of a discovery for a curious fourth-grader whose entireexperience of soup to this point had consisted of Campbell's cream of tomato andchicken noodle. I'd eaten in restaurants before, sure, but this was the firstfood I really noticed. It was the first food I enjoyed and, more important,remembered enjoying. I asked our patient British waiter what this delightfullycool, tasty liquid was.

"Vichyssoise," came the reply, a word that to this day — even though it's now atired old warhorse of a menu selection and one I've prepared thousands of times— still has a magical ring to it. I remember everything about the experience:the way our waiter ladled it from a silver tureen into my bowl; the crunch oftiny chopped chives he spooned on as garnish; the rich, creamy taste of leek andpotato; the pleasurable shock, the surprise that it was cold.

I don't remember much else about the passage across the Atlantic. I sawBoeing Boeing with Jerry Lewis and Tony Curtis in the Queen's movie theater, anda Bardot flick. The old liner shuddered and groaned and vibrated terribly thewhole way — barnacles on the hull was the official explanation — and from NewYork to Cherbourg, it was like riding atop a giant lawnmower. My brother and Iquickly became bored and spent much of our time in the "Teen Lounge, ' listeningto "House of the Rising Sun" on the jukebox, or watching the water slosh aroundlike a contained tidal wave in the below-deck saltwater pool.

But that cold soup stayed with me. It resonated, waking me up, making meaware of my tongue and, in some way, preparing me for future events.

My second pre-epiphany in my long climb to chefdom also came during thatfirst trip to France. After docking, my mother, brother and I stayed withcousins in a small seaside town near La Cabourg, a bleak, chilly resort area inNormandy, on the English Channel. The sky was almost always cloudy; the waterwas inhospitably cold. All the neighborhood kids thought I knew Steve McQueenand John Wayne personally — as an American, it was assurned we were all pals, thatwe hung out together on the range, riding horses and gunning down miscreants — soI enjoyed a certain celebrity right away. The beaches, while no good forswimming, were studded with old Nazi blockhouses and gun emplacements, manystill bearing visible bullet scars and the scorch of flamethrowers, and therewere tunnels under the dunes — all very cool for a little kid to explore. Mylittle French friends were, I was astonished to find, allowed to have acigarette on Sunday, were given watered vin ordinaire at the dinner table andbest of all, they owned Vélo Solex motorbikes. This was the way to raise kids, Irecall thinking, unhappy that my mother did not agree.

So for my first few weeks in France, I explored underground passageways,looking for dead Nazis, played miniature golf, sneaked cigarettes, read a lot ofTintin and Astérix comics, scooted around on my friends' motorbikes and absorbedlittle life-lessons from observations that, for instance, the family friendMonsieur Dupont brought his mistress to some meals and his wife to others, hisextended brood of children apparently indifferent to the switch.

I was largely unimpressed by the food.

The butter tasted strangely "cheesy" to my undeveloped palate. The milk — astaple, no, a mandatory ritual in '60s American kiddie life — was undrinkablehere. Lunch seemed always to consist of sandwich au jambon or croque-monsieur.Centuries of French cuisine had yet to make an impression. What I noticed aboutfood, French style, was what they didn't have.

After a few weeks of this, we took a night train to Paris, where we met upwith my father and a spanking new Rover Sedan Mark III, our touring car. InParis, we stayed at the Hôtel Lutétia, then a large, slightly shabby old pile onBoulevard Haussmann. The menu selections for my brother and me expandedsomewhat, to include steak-frites and steak haché (hamburger). We did all thepredictable touristy things: climbed the Tour Eiffel, picnicked in the Bois deBoulogne, marched past the Great Works at the Louvre, pushed toy sailboatsaround the fountain in the jardin de Luxembourg — none of it much fun for anine-year-old with an already developing criminal bent. My principal interest atthis time was adding to my collection of English translations of Tintinadventures. Hergés crisply drafted tales of drug smuggling, ancient temples andstrange and faraway places and cultures were real exotica for me. I prevailed onmy poor parents to buy hundreds of dollars' worth of these stories at W. H.Smith, the English bookstore, just to keep me from whining about thedeprivations of France. With my little short-shorts a permanent affront, I wasquickly becoming a sullen, moody, difficult little bastard. I fought constantlywith my brother, carped about everything and was in every possible way a drag onmy mother's Glorious Expedition. My parents did their best. They took useverywhere, from restaurant to restaurant, cringing, no doubt, every time weinsisted on steak haché (with ketchup, no less) and a "Coca." They enduredsilently my gripes about cheesy butter and the seemingly endless amusement Itook in advertisements for a popular soft drink of the time, Pschitt ("I wantshit! I want shit!") They managed...