Accessibility links
Path of Destruction NPR coverage of Path of Destruction: The Devastation of New Orleans And the Coming Age of Superstorms by John Mcquaid and Mark Schleifstein. News, author interviews, critics' picks and more.

An account of the devastating destruction of Hurricane Katrina examines pre-existing warning signs and draws on historical records, geological findings, and climatology studies to examine the disturbing increase in powerful storms worldwide.

NPR stories about Path of Destruction

July 10, 2006 • Even after the extensive coverage of Hurricane Katrina, New Orleans journalist Jason Berry say there's much to be learned from new books on the storm: about global warming, how cities live or die, the science of levees and stunning human dramas. 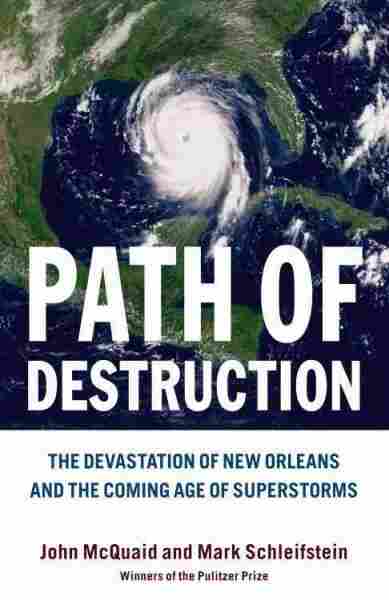 The Devastation of New Orleans and the Coming Age of Superstorms

In 2002, we wrote a series for the Times-Picayune that explored New Orleans's unique vulnerability to hurricanes, especially the enormous storm surge waves they generate. Our reporting explored an obvious but little-acknowledged fact: here was a city that, for the six months of every hurricane season, lived with a substantial risk of utter annihilation. New Orleans's predicament seemed to fly in the face of sound government policy, not to mention basic common sense: much of the city was built on top of a swamp, below sea level and gradually sinking. The hurricane levees around it formed a shallow bowl that, if breached or overtopped by a storm surge, would fill with water. Anyone there would be trapped by quickly rising floodwaters, their escape routes cut off. As streets became rivers and neighborhoods lakes, hundreds, maybe thousands, would drown.

Such horrors seemed unimaginable to most Americans, and remote even to New Orleans residents who had heard scientists and emergency managers describe them each summer. Hadn't the city already survived for almost three hundred years? Didn't it have a full guarantee of protection from the U.S. government, in the form of levees designed by the Army Corps of Engineers, with its two centuries of experience and gold-plated reputation? The fine print acknowledged the danger. The Corps of Engineers claimed its levees could protect the city only from the storm surge waves produced by relatively weak hurricanes, those in Categories 1 and 2, and some of those in Category 3 (on the Saffir-Simpson scale, used to measure hurricane strength). If a more powerful storm struck the city, the levees would fail-end of story. That dark fate was the result of decisions made long ago by Congress that no one seemed interested in revisiting. In Washington, those in power had other constituencies requiring immediate attention, and in Louisiana the salvation of New Orleans was surprisingly low on the to-do list. After all, New Orleans had thus far avoided the Big One. And its citizens and the nation thus essentially agreed to gamble that, as hurricanes roared over the Gulf of Mexico each year, it would keep lucking out again and again.

There was no rescue strategy for the city itself. If New Orleans got hit, the plan was simply to let it be destroyed, then clean up the mess.

So, when Hurricane Katrina struck and submerged most of New Orleans on August 29, 2005, we were stunned and horrified, but not surprised. Afterward, as we-along with hundreds of others of journalists, congressional investigators, and forensic engineers-began to examine what had gone wrong, the outlines of an even greater tragedy emerged. The levee system had been much weaker than originally advertised. In some places, the Corps had made serious design errors, engineering screw-ups of historic dimensions. The levees were not the only problem; the city of New Orleans had essentially given up trying to figure out how to evacuate residents with no transportation, and the federal government reorganization that followed the terrorist attacks of September 11, 2001, had, somehow, actually weakened the nation's ability to respond to a catastrophe. Initially it had been easy to blame the destruction of this great American city on Mother Nature. But the more we investigated, the more obvious it was that man had set the stage.

There has always been an element of folly in mankind's attempts to control or outsmart nature. The self-important activities of human society are brief flickers of a candle flame compared to the mighty forces driving the rise of mountains, the shifting of river courses, and the fury of hurricanes. Occasionally, nature erupts in some entirely predictable way-a hurricane thrashes the coast, a river overflows into towns on its banks, a mudslide carries off a neighborhood-and stunned citizens and their leaders collectively remark, "What the hell just happened?" Yet after a few years, the disaster is forgotten, and people fall back into the patterns of living that tempt another, even worse catastrophe.

Of course, life requires some risk-taking, and there is no such thing as perfect security. But this cycle of disaster is so obvious, and so stubbornly repetitive, that the pattern suggests it may be hardwired into the human brain. Humans tend to be optimists even when facts tell them otherwise, like the title character in John Irving's The World According to Garp, who buys a house after watching a plane crash into the upper story, figuring the property has used up its quota of bad luck.

Americans are especially stubborn this way, and indeed, America would not exist if countless explorers, patriots, and homesteaders had not taken on grave risks. But today, technology and the trappings of modern life mislead us; they can create the appearance of security, making still-dangerous places feel positively cozy. And as the twenty-first century has dawned, new perils have arisen, among them a disturbing increase in the number of powerful hurricanes around the globe, possibly spawned by man-made global warming.

A loose-knit group of scientists and emergency managers was the only thing standing between New Orleans and its eventual fate. They devoted entire careers to studying hurricanes and storm surges, and raced desperately against the doomsday clock, hitting countless bureaucratic walls along the way, doing their best to push New Orleans's predicament into the public eye. But they were small voices calling attention to ingrained, systemic problems. That their heroic efforts ultimately failed is the result of ignorance, bad decisions, and a sorry lack of leadership. It is too late to save the New Orleans that once was. But it may not be too late to do something about the storms to come.