The Making of the American Capital

From the acclaimed author of "Bound for Canaan" comes a major work of American history on the astonishing compromises and alliances involved in making Washington, D.C., the capital of the new nation..

Inside 'The Making Of The American Capital'

February 3, 2009 • On January 20th, millions of Americans descended on the nation's capital to watch the first African American swear in as President of the United States. But few of those celebrating in Washington, D.C., know the story of how the American capital came to be.

Inside 'The Making Of The American Capital'

June 16, 2008 • In his new book, Washington: The Making of the American Capital, Fergus Bordewich reveals how Washington, D.C., became the nation's seat of power and — perhaps a lesser-known fact — how the historic enslavement of African-Americans played a role in that designation. Bordewich talks about his new book. 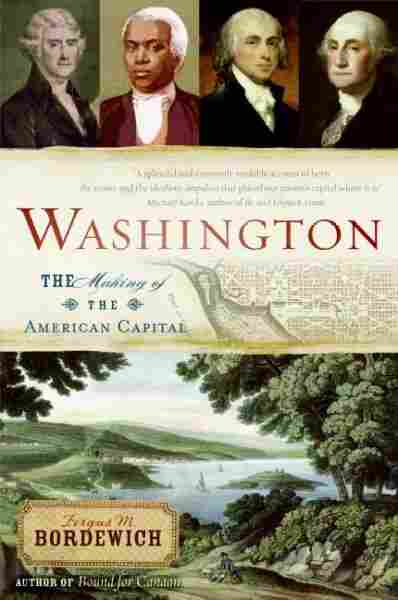 The Making of the American Capital

The New Machine of Government

"The climate of the Patowmack is not only unhealthy, but destructive to northern constitutions. Vast numbers of eastern adventurers have gone to the Southern states, and all have found their graves there."
—Theodore Sedgwick of Massachusetts

Federal Hall, home to the newly minted United States Congress, was inseparable from its designer, the picturesque Major Peter Charles L'Enfant, late of the Continental Army, architect extraordinaire, émigré, and a figure almost as recognizable to New York's elite as President Washington himself. For months, his tall, fastidious figure had prowled around the old city hall on Wall Street, examining its eighty-year-old brickwork, muttering to himself in French, or his syntactically challenged English, imagining—where others saw merely a tired old workhorse of a building—a blank canvas upon which to paint an architectural epic.

Few men were more in demand by the belles of New York than the celebrated L'Enfant. He was no one's idea of handsome, but his beaky face was more than compensated for by the Gallic panache that he brought to the glittery whirl of society. There was, it was true, a certain "haughtiness," an edgy volatility, to his otherwise impeccable manners, but people were willing to make allowances. He was after all, well, French, not to mention a favored confidant of the political luminaries who had come together here in the temporary capital on the Hudson. L'Enfant had grown up the son of a professional painter of battle scenes, in the incandescent glow of the court of Louis XV. Like his compatriot the Marquis de Lafayette, he volunteered to fight for American independence, arriving in 1777 with a shipment of guns and ammunition, a knack for making useful friends, and a most unmilitary education from the prestigious Royal Academy of Painting and Sculpture in Paris. During the brutal winter at Valley Forge, he entertained his shivering fellow officers with his sparkling conversation and pencil sketches, winning the attention and later the patronage of George Washington and his aide Alexander Hamilton. Hypersensitive though L'Enfant could be, he proved himself under fire to be a soldier of considerable courage, when he was seriously wounded storming the British fortifications at Savannah: in later years, he would often have to rely on laudanum to control the pain. Imprisonment by the British further gilded his patriotic credentials, which would shield him again and again from the consequences of his personality.

After the war, having become a citizen and changed his name from Pierre to the more American-sounding Peter, L'Enfant developed a lucrative career as New York's most sought-after architect. He remodeled the interior of St. Paul's church, planned a vast (though never built) park that would have stretched from New York's present City Hall to Greenwich Village, and staged a famously extravagant procession on the eve of New York's adoption of the Constitution, featuring along with much other exotica, a pretty eight-year-old boy dressed as Bacchus, a contingent of furriers made up to resemble Indians in sweltering animal skins, and a model frigate—christened the Hamilton—mounted on wheels and firing salvos from its two cannon as it was tugged through the streets of Manhattan. Perhaps not entirely by coincidence, Alexander Hamilton, who was now the secretary of the treasury, soon afterward invited L'Enfant to design the country's first coins and medals.

However, it was L'Enfant's transformation of city hall into Federal Hall, the seat of Congress and an icon of patriotic spirit, that cemented his reputation as the architectural laureate of the republic. Already redolent with history—in 1735 the printer John Peter Zenger had been tried there in a case that became a landmark of press freedom, and in 1765 delegates from the colonies had met there to denounce the Stamp Act—the dowdy structure faced south down a gentle slope, diagonally across from the present-day New York Stock Exchange. New Yorkers fairly swooned at the stylishness of L'Enfant's redesign. He erased the old Queen Anne facade and in its place erected an architectural paean to classical Rome, whose fashionable motifs served as a universal visual code for Enlightenment idealism and republican politics. Where the two wings of city hall had flanked an open courtyard, he erected a lofty balcony framed by four austere Doric columns topped by a triangular pediment where, instead of the muscled gods of the ancient world, Americans found an image of their own native eagle from which radiated the rays of the sun, proclaiming the dawn of a new age. The interior was no less impressive. The twenty-two-member Senate met in a chamber on the second floor, adjoining the "machinery room," where models of inventions were displayed. The sixty-five-member House of Representatives, regarded at the time as the more powerful of the two bodies, occupied a richly decorated, two-story octagonal chamber that opened off the central vestibule. So proud were New Yorkers of the government's new home that one popular theatrical production dramatized a mock-up of Federal Hall descending from the clouds while an actor costumed as the "genius of Columbia" poetically hailed it as a sacred temple of liberty and virtue. (To be sure, there were a few dissenters: puritanical Pennsylvania Senator William Maclay regarded the "vamped up Jimcrackery and Gingerbread" of L'Enfant's design as an insult to Congress.)

New York was the country's temporary capital more or less by default, Congress having come to rest there in 1785 after repeatedly failing to agree on a permanent seat of government. By European standards, the city was little more than an overgrown town, extending barely twenty blocks north from the Battery before petering out amid swamps and meadows. The Revolutionary War and the long British occupation had taken a heavy toll: hundreds of buildings had burned, commerce had come to a halt, and many of the most affluent citizens had gone into exile. Fortifications still scarred the suburbs. But after years of stagnation, the city was now coming back to life. In the past five years alone . . .