Make Gentle the Life of This World

Make Gentle the Life of This World

The Vision of Robert F. Kennedy

Published to coincide with the thirtieth anniversary of his assassination, this memoir, compiled by Robert Kennedy's youngest son, contains stirring and compassionate writings recorded in the slain politician's personal journals throughout the 1960s. 50,000 first printing. $50,000 ad/promo. Tour.

NPR stories about Make Gentle the Life of This World

Max Kennedy: A Son's Vision of a Stranger Father

June 4, 2008 • Max Kennedy, the ninth child of Robert and Ethel Kennedy, was just three years old when his father was assassinated. In 1998, he edited a collection of his father's private journal entries called Make Gentle The Life of this World: The Vision of Robert F. Kennedy.

Max Kennedy: A Son's Vision of a Stranger Father

Excerpt: Make Gentle The Life Of This World 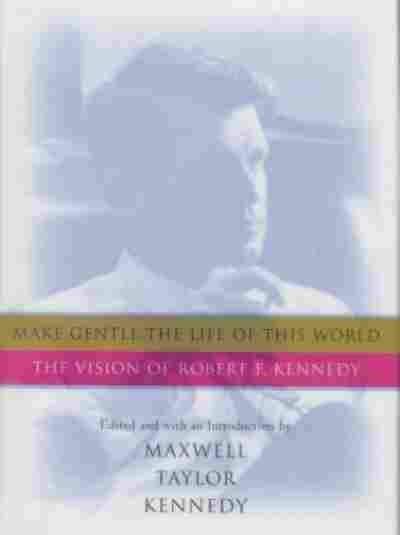 I guess more than anything this book began as a little boy's searchfor his father. About a year or so ago, my mother asked me to puttogether a book of quotations from my father's speeches. Iavoided the project at first. I had built a life somewhatindependent of my family, and I did not want to spend so muchtime on a project that would be inextricably identified with it. Ialso felt trepidation at the daunting task of spending so much timethinking about my father.

Finally, I had my own family to care for. I had two littlechildren of my own, and my wife, Vicki, had just begun workingagain. (She had cared for Maxey and Summer during my yearstrying cases as an assistant district attorney, and now we hadtraded places: Vicki was a teaching fellow at Harvard, and I wastaking care of our children.)

My son was just reaching the age I was when my father waskilled. As I watched my own little boy, I thought more and moreabout my father, his work, and his life.

In Vicki's literature courses, she is always trying to make thecharacters in the books she teaches become real for herstudents, to become companions her students can hold onto as they make their way in the world--guides to help with theirvarious struggles in life. I thought about the many books that havebeen written about my father, and then about the many storiesabout him in publications of all sorts; and I thought how fewpeople had read these books. These days, information comes atus so quickly and thickly.

I thought that I would like to try to make Robert F. Kennedyavailable both to those who remember him and what he tried todo, and to those whose only information about him may havecome from television. I wanted to create a book that could tellreaders a little of who RFK was, even if they had only a fewmoments available.

As a son who lost his father early and to violence, I guess thisbook in some way attempts to put together the various pieces--theletters, the statements, the recordings, the pictures, the thoughts--torender a life. It is a life that is important for me as a son, but alsoimportant for me as an American who is looking not merely for afather who is gone, but for leadership, and perhaps even heroism.

My father was of the last generation to grow up in a time whenAmericans made an effort to remain consistent. Few ofhis peers thought much about reinventing themselves for somekind of gain; constancy was prized more than material success.We live in more complicated times. My father was an importantbridge between two generations, across what was perhaps thegreatest "gap" in the history of the country.

Most people become more and more set as they grow older.My father became more flexible, yet his core values and moralityremained constant.

Americans seem to have two natures, one extraordinarilypositive and forthright, the other dark and cynical. Historically, inchallenging times, it has been easiest for politicians to appeal tothat baser side. Thus we've had the success of Father Coughlinand Huey Long during the depression, and later, of GeorgeWallace. (It has always struck me as odd that virtually all of theDemocrats who supported George Wallace had previously beenRFK Democrats. The same Americans who voted for Wallacewere able to share RFK's vision of this country--a much differentview.) I have never come across a public pronouncement by RFKin which he made an appeal to the darker side.

My father was not a typically introspective person. Few of hispersonal letters offer much real insight into himself. He seemsrather to have been most insightful during moments devoted toother people. Preparing for this book, I began reading books aboutmy father written by people who knew him well. Each time hewas quoted, I underlined. I also read through the manyletters he wrote home from school, and from the Navy, and fromhis travels. I read the letters he sent to his friends, and the ones liesaved from them. I read from papers lie wrote in law school. Ireread the letters he wrote to us, his children. I read the privateessay he wrote about his own father. I read virtually everyspeech he ever made. (I found them remarkable documents. Ihad read them often as I grew up, and I wanted to bring a part ofthe impact of that language to an audience that perhaps does nothave time to read through RFK's collected speeches.) I rereadthe books he wrote, about mob rackets, about foreign policy,about the Cuban missile crisis.

He wrote mostly about America, where the country was,where he thought we were heading, and where we should beheading. And throughout his work he emphasized ourresponsibilities as citizens and as human beings, to ourselves andto each other.

Many of his most profound statements about the world, aboutsociety, and even about himself come in his public speeches. Hehad help. There is the unmistakable polish of many speechwritersfrom the years in Washington. Most significant is the impact ofthe three young writers: Peter Edelman, Adam Walinsky, and JeffGreenfield. All under thirty, they contributed much to his words.

Finally I read and reread my father's daybook. It had begun asa joint project with President Kennedy, who kept a book in whichhe wrote down quotations from his readings that struckhim as interesting, or funny, or poignant in some way. When lackdied, my father continued the book and expanded it, using thequotations in many of his speeches. He would quote Aeschyluswhen he spoke to the poorest audiences that a presidentialcandidate had ever bothered with, and they cheered.

I read the Greek translations that so moved him. I wentthrough old bookshelves and read his well-thumbed and underlinedcopy of The Echo of Greece, by Edith Hamilton. I found a littlebox hidden away at our home, Hickory Hill, filled with quotationshe had taken from Camus. I went back and I found the old poemsand plays, the essays by Camus that he loved. And I read themagain.

I have tried to put together here a picture of a man. This bookis not about specific policy concerns, though it may bring to mindmany of the real challenges of the 1960s, nor is it much of apersonal account. This book is not history, neither essay norbiography, and it is not even strictly a book of quotations. Itcontains not only quotations from Robert F. Kennedy, but alsomany from other sources cited in his daybook. These are thewords he spoke to challenge and inspire us, and also the words heread that inspired and challenged him. The selections in this bookcan be read almost like poetry, or as meditations for someone whowants to think about Robert Kennedy and the 1960s and thenature of politics and leadership. It is my hope that people willread this book and think back to a time, a generation ago, whenthe country was much smaller. That they will think a little bitabout who we were and what we have become--that the readerwho is willing to spend a few hours will find reason to wonderwhat it means to be a politician, to be an American, and to contributesto one's family, society, and country.