Nine-year-old Morris Bird III, with his baby sister and little red wagon in tow, embarks on a remarkable odyssey across Cleveland, in a novel set against the East Ohio Gas explosion of 1944, a disaster that killed some 130 people and leveled a square mile area on Cleveland's east side, in a new edition of a classic novel first published in 1965. Reprint. 40,000 first printing.

NPR stories about The Greatest Thing Since Sliced Bread 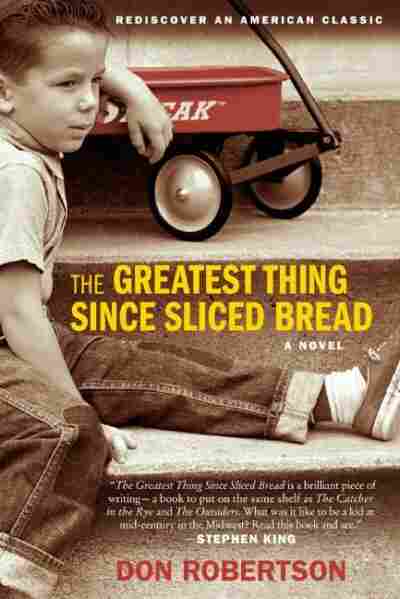 The legless man was wise enough to understand that heroes can be found in the damnedest places. Which was why he didn't hesitate when he called the boy the greatest thing since sliced bread.

For the boy, though, the big thing wasn't his bravery. As far as he was concerned, too much fuss was made over it.

For the boy, the big thing happened before the explosion. It happened at the moment he saw his old buddy Stanley Chaloupka. The exact moment.

Why? Because it meant that the boy had accomplished what he had set out to do.

Which helped him come to terms with the things he felt badly about. Stupidities, for instance. Betrayals.

The explosion was just something that happened to happen.

Funny about that explosion. It really never should have happened to happen. Those gas tanks were the safest in the world. Everyone said so.

They were built in 1941 by the East Ohio Gas Co., supplier of natural heating gas to all of the great city of Cleveland and northeastern Ohio. There were four of them, and they were designed for the storage of natural gas in its liquefied state. Three of them were spherical. The fourth was tubular and about as large as the other three combined. Their capacity was 400,000 feet of liquefied gas, which was the equivalent of 240,000,000 feet of gas in its natural state. The gas company's publicists were proud of these new tanks, and photographs of them were run in all the newspapers.

A great deal of money was spent in assuring people there was no danger.

The campaign was successful. Those gas tanks were the safest in the world. Everyone said so.

But then one day the explosion happened to happen.

A lot of people were killed. The boy encountered the legless man. And the poor burnt lady. And the pretty Red Cross lady. And many other people.

When the day was finished, two things had happened to the boy.

First, and most important, he had accomplished—in seeing his old buddy Stanley Chaloupka—what he had set out to do.

Second, he had behaved in such a way that the legless man had called him, for whatever it was worth, the greatest thing since sliced bread.

The year was 1944, and the month was October, and Morris Bird III was nine years old, and he was in love with Veronica Lake. He also was in love with a girl named Suzanne Wysocki (her hair was also long and blond, and sometimes it fell over her left eye too), but his love for Veronica Lake was much stronger. Suzanne Wysocki was only eight, and he saw her just about every day. These things made a difference.

And anyway, sometimes Suzanne Wysocki was an awful pill.

"You ever think of scary things?" she asked him one day.

"What kind of things?"

"I'm not going to have any babies," said Morris Bird III.

Suzanne Wysocki made a fist. "Now be serious."

Quickly he nodded. He didn't like it when people were angry with him. "All right," he said.

She opened the hand. "Good," she said. She looked at the hand and then she looked at the trees. "Uh, what I mean is—you know, being alone and having no one to run to, doing things on your own, growing up, getting married, having babies, getting old, dying—"

"I don't think much about dying."

"You should," said Suzanne.

"Because it's going to happen to you."

"You know what my brother Frank used to say?"

"When I was little, sometimes I'd cry. You know. Over nothing. The way little kids do. If Frank was around, he'd come to me, and you know what he'd say? He'd grin at me and he'd say: Now now, honey, don't get so worked up. It's all going to be over soon enough. Just think, you're twenty-four hours closer to dying than you were at this time yesterday."

Morris Bird III looked down the street at an old Dodge with a B sticker.¬ It was parked in front of the dying Mr. Pisani's house. He said nothing. There was nothing he knew to say. Not to something like that.

"God is supposed to take you. You believe that?"

Suzanne made a clucking noise. "You're not being serious."

Again Morris Bird III was silent. He wished he didn't love her. Then he would have been able to give her a good one. Preferably across the mouth. He looked at the sky and he saw a lot of nothing. The things he wanted to work in his mind were sleds and batting averages and leather caps that made you look like an aviator. So some day he would die. So big fat deal.

Suzanne stood up. "You poop," she said. She clomped into her house.

Morris Bird III said nothing. His love for Suzanne Wysocki was some love. If he'd known how to get rid of it, he wouldn't have wasted a second.