Accessibility links
To Rule The Waves NPR coverage of To Rule The Waves: How The British Navy Shaped The Modern World by Arthur Herman. News, author interviews, critics' picks and more.

To Rule The Waves

To Rule The Waves

How The British Navy Shaped The Modern World

Recounts how Britain's Royal Navy allowed one nation to rise to a level of power unprecedented in history. From its beginnings under Henry VIII and adventurers like John Hawkins and Francis Drake, the Royal Navy toppled one world economic system, built by Spain and Portugal after Columbus, and ushered in another—the one in which we still live today. Follows its historiy from the defeat of the Spanish Armada, through the seventeenth century, when the navy came to play a leading role as England became a world power, through the convulsions of Napoleon, the twentieth century, and the downfall of the British Empire itself, as Britain passed its essential elements on to its successor, the United States.

NPR stories about To Rule The Waves

Excerpt: To Rule The Waves 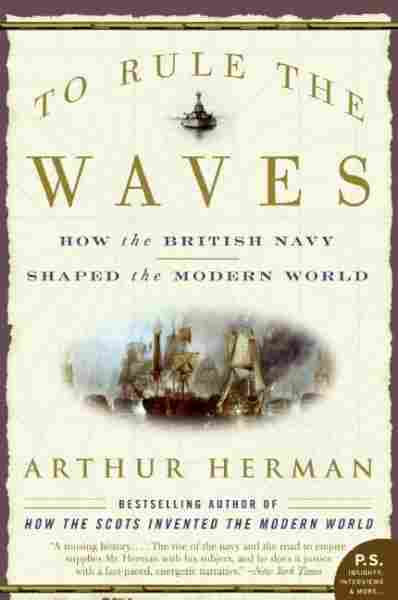 To Rule the Waves

How the British Navy Shaped the Modern World

A Sea-man hath a valiant heart,
And bears a noble minde,
He scorneth once to shrink or start
For any stormy wind.
-- Anonymous Ballad

For three days the ships had struggled to hold their own against the hurricane. The wind out of the southeast had howled through the masts and rigging, tearing at their battered sails and smashing waves across their decks. There were five of them, sailing blind into the storm, in hour after hour of blackness. All they knew was that they were somewhere west of Cuba, and that they had to keep their ships pointed into the wind or else they could end up being thrown onto the coast of Spanish Florida. Their only guide through the perpetual darkness was the wildly tossing stern lantern of the Jesus, the flagship of their leader and commander, John Hawkins.

Storm-tossed ships: five tiny flyspecks in the midst of an empty hostile sea, and in the heart of a hostile empire. Yet without knowing it, they were about to alter history. A crucial moment had arrived in the struggle for global power. A new antagonist was about to enter the fray: England. John Hawkins's experiences over the next twelve days in September 1568 would mark the start of a century-long struggle with Spain for dominion over the New World, and also the start of the modern British navy.

No one would have been more surprised by this than John Hawkins. Thirty-five years old, small and spare, he was not a visionary but a man of action, a tough experienced mariner and the kind of man others naturally followed — even into a three-day hurricane. He had spent every moment of those three days on deck. Rain streamed from his hair and beard as he ordered men aloft to take in sail so that the hurricane wind did not snap off a weakened mast or spar like a matchstick. At one desperate point, he had even been forced to cut away the top section of his mainmast to reduce the strain.

The Jesus was an old ship, a leaky tub with sprung timbers and a rotten hull. Now, after days of battering, she* was ready to give way completely. The carpenter came up from below and bellowed in his ear that the timbers around the stern post were about to burst. The gaps between them were so wide that fish were able to swim through into the hold, the carpenter said; if those timbers opened any wider, they would founder and sink.

This was John Hawkins's third trip into the Caribbean. His father, William Hawkins of Plymouth, was the first English merchant to gatecrash the trade monopoly Portugal and Spain enjoyed with their colonies in the New World. William Hawkins had made a fortune running goods from the Guinea coast — the two thousand miles of African coastline from the Senegal River to the mouth of the Niger — to Portuguese Brazil. His sons William and John had joined him on those dangerous transatlantic voyages when they were barely teenagers. But unlike his father, John Hawkins wanted more than just the occasional smuggling raid. He envisioned a regular trading network from Africa to America, with English ships offering the one commodity of which Spanish settlers could not get enough: slaves.

Slavery was a fact of life in the sixteenth century. The African slave trade was already the largest form of commerce in the world. No one had the least qualms about it, least of all Africa's own tribal rulers. It was also vital for running Spain's empire in America. Hawkins figured he could offer Spanish settlers slaves in greater quantities and at a lower price than they could get from their own merchants. Then they would pay him with the product from the New World everyone craved but which Spanish law forbade to all outsiders: gold and silver from the mines of Peru and Mexico. Once the trade got going, the Spanish colonies would flourish, England would prosper, and Hawkins would be a rich man — the uncrowned king of the New World.

In 1562 Hawkins sought permission for his first slaving voyage from Queen Elizabeth. "The voyage I pretend," he wrote, "is to load negroes in Guinea and sell them in the West Indies in truck of gold, pearls, and emeralds." He got her tacit approval, as well as backing of a large syndicate of London merchants. In October he set out from Plymouth for Tenerife, the central island of the Canaries and gateway to Africa and America. After stopping several Portuguese slave ships off Guinea and buying or hijacking their cargo (it is unclear which), Hawkins made his way across the Atlantic to Hispaniola, the island where Christopher Columbus had landed seventy years earlier and which was now a thriving Spanish colony.

Hawkins did a brisk business with the local planters. They liked being able to buy their black labor at a fraction of the official price of one hundred ducats per head. Hawkins returned triumphantly home in August of 1563, in ships laden with gold, silver, pearls, sugar, and hides — so much sugar and hides, in fact, that he had to hire two extra ships to carry it all. Everyone was happy, except of course the slaves (although Hawkins took better care of his expensive cargo, even outfitting them with shirts and shoes, than did slavers in later centuries), and the Spanish authorities, who had just seen their monopoly broken and their laws flouted.

Hawkins had done everything to try to accommodate and placate them even though the Spanish were Catholics and Hawkins a God-fearing Protestant. He appealed to the traditional alliance between England and Spain; he pointed out how the trade would benefit Spaniards, not just the English and himself. He had even shipped some of his goods on to Seville, so that he could pay customs just like any regular Spanish merchant (instead, the authorities seized the lot and threw Hawkins's men in prison) ...