A member of a species that takes over the minds of human bodies, Wanderer is unable to disregard his host's love for a man in hiding, a situation that forces both possessor and host to become unwilling allies. A first adult novel by the author of Eclipse.

NPR stories about The Host

May 9, 2008 • Stephenie Meyer, author of the best-selling young adult series Twilight, has written her first adult book. The Host is a science fiction romance about two woman — one an alien from outer space — who inhabit the same body and are in love with the same man. 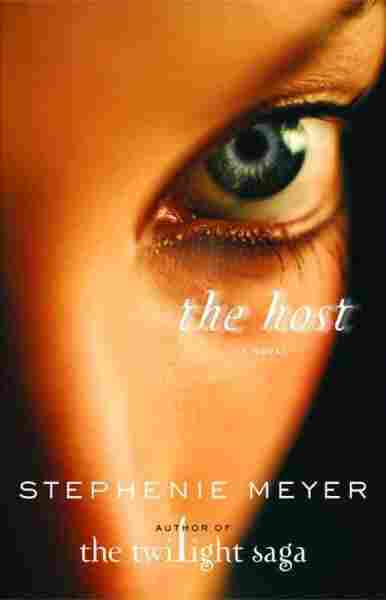 I knew it would begin with the end, and the end would look like death to these eyes. I had been warned.

Not these eyes. My eyes. Mine. This was me now. The language I found myself using was odd, but it made sense. Choppy, boxy, blind, and linear. Impossibly crippled in comparison to many I'd used, yet still it managed to find fluidity and expression. Sometimes beauty. My language now. My native tongue.

With the truest instinct of my kind, I'd bound myself securely into the body's center of thought, twined myself inescapably into its every breath and reflex until it was no longer a separate entity. It was me.

Not the body, my body.

I felt the sedation wearing off and lucidity taking its place. I braced myself for the onslaught of the first memory, which would really be the last memory-the last moments this body had experienced, the memory of the end. I had been warned thoroughly of what would happen now. These human emotions would be stronger, more vital than the feelings of any other species I had been. I had tried to prepare myself.

The memory came. And, as I'd been warned, it was not something that could ever be prepared for.

It seared with sharp color and ringing sound. Cold on her skin, pain gripping her limbs, burning them. The taste was fiercely metallic in her mouth. And there was the new sense, the fifth sense I'd never had, that took the particles from the air and transformed them into strange messages and pleasures and warnings in her brain-scents. They were distracting, confusing to me, but not to her memory. The memory had no time for the novelties of smell. The memory was only fear.

Fear locked her in a vise, goading the blunt, clumsy limbs forward but hampering them at the same time. To flee, to run-it was all she could do.

The memory that was not mine was so frighteningly strong and clear that it sliced through my control-overwhelmed the detachment, the knowledge that this was just a memory and not me. Sucked into the hell that was the last minute of her life, I was she, and we were running.

It's so dark. I can't see. I can't see the floor. I can't see my hands stretched out in front of me. I run blind and try to hear the pursuit I can feel behind me, but the pulse is so loud behind my ears it drowns everything else out.

It's cold. It shouldn't matter now, but it hurts. I'm so cold.

The air in her nose was uncomfortable. Bad. A bad smell. For one second, that discomfort pulled me free of the memory. But it was only a second, and then I was dragged in again, and my eyes filled with horrified tears.

I'm lost, we're lost. It's over. They're right behind me now, loud and close. There are so many footsteps! I am alone. I've failed. The Seekers are calling. The sound of their voices twists my stomach. I'm going to be sick. "It's fine, it's fine," one lies, trying to calm me, to slow me. Her voice is disturbed by the effort of her breathing. "Be careful!" another shouts in warning. "Don't hurt yourself," one of them pleads. A deep voice, full of concern. Concern!

Heat shot through my veins, and a violent hatred nearly choked me.

I had never felt such an emotion as this in all my lives. For another second, my revulsion pulled me away from the memory. A high, shrill keening pierced my ears and pulsed in my head. The sound scraped through my airways. There was a weak pain in my throat.

Screaming, my body explained. You're screaming.

I froze in shock, and the sound broke off abruptly.

This was not a memory.

My body-she was thinking! Speaking to me!

But the memory was stronger, in that moment, than my astonishment.

"Please!" they cry. "There is danger ahead!"

The danger is behind! I scream back in my mind. But I see what they mean. A feeble stream of light, coming from who knows where, shines on the end of the hall. It is not the flat wall or the locked door, the dead end I feared and expected. It is a black hole.

An elevator shaft. Abandoned, empty, and condemned, like this building. Once a hiding place, now a tomb.

A surge of relief floods through me as I race forward. There is a way. No way to survive, but perhaps a way to win.

No, no, no! This thought was all mine, and I fought to pull myself away from her, but we were together. And we sprinted for the edge of death.

"Please!" The shouts are more desperate.

I feel like laughing when I know that I am fast enough. I imagine their hands clutching for me just inches behind my back. But I am as fast as I need to be. I don't even pause at the end of the floor. The hole rises up to meet me midstride.

The emptiness swallows me. My legs flail, useless. My hands grip the air, claw through it, searching for anything solid. Cold blows past me like tornado winds.

I hear the thud before I feel it.... The wind is gone.... And then pain is everywhere.... Pain is everything. Make it stop. Not high enough, I whisper to myself through the pain. When will the pain end? When ...?

The blackness swallowed up the agony, and I was weak with gratitude that the memory had come to this most final of conclusions. The blackness took all, and I was free. I took a breath to steady myself, as was this body's habit. My body.

But then the color rushed back, the memory reared up and engulfed me again.

No! I panicked, fearing the cold and the pain and the very fear itself.

But this was not the same memory. This was a memory within a memory-a final memory, like a last gasp of air-yet, somehow, even stronger than the first.

The blackness took all but this: a face.

The face was as alien to me as the faceless serpentine tentacles of my last host body would be to this new body. I'd seen this kind of face in the images I had been given to prepare for this world. It was hard to tell them apart, to see the tiny variations in color and shape that were the only markers of the individual. So much the same, all of them. Noses centered in the middle of the sphere, eyes above and mouths below, ears around the sides. A collection of senses, all but touch, concentrated in one place. Skin over bones, hair growing on the crown and in strange furry lines above the eyes. Some had more fur lower down on the jaw; those were always males. The colors ranged through the brown scale from pale cream to a deep almost-black. Aside from that, how to know one from the other?

This face I would have known among millions.

This face was a hard rectangle, the shape of the bones strong under the skin. In color it was a light golden brown. The hair was just a few shades darker than the skin, except where flaxen streaks lightened it, and it covered only the head and the odd fur stripes above the eyes. The circular irises in the white eyeballs were darker than the hair but, like the hair, flecked with light. There were small lines around the eyes, and her memories told me the lines were from smiling and squinting into sunlight.

I knew nothing of what passed for beauty among these strangers, and yet I knew that this face was beautiful. I wanted to keep looking at it. As soon as I realized this, it disappeared.

Mine, spoke the alien thought that should not have existed.

Again, I was frozen, stunned. There should have been no one here but me. And yet this thought was so strong and so aware!

Impossible. How was she still here? This was me now.

Mine, I rebuked her, the power and authority that belonged to me alone flowing through the word. Everything is mine.

So why am I talking back to her? I wondered as the voices interrupted my thoughts.