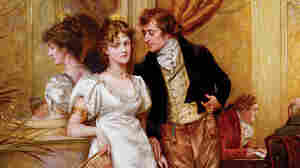 July 23, 2010 • Author Helen Simonson risks her literary pretensions to admit a lifelong secret attraction to the Regency romance novels of Georgette Heyer. The dampened muslin dresses, the highly polished boots — for her, nothing beats these tales of heroines who require a man with a firm hand on the bridle. 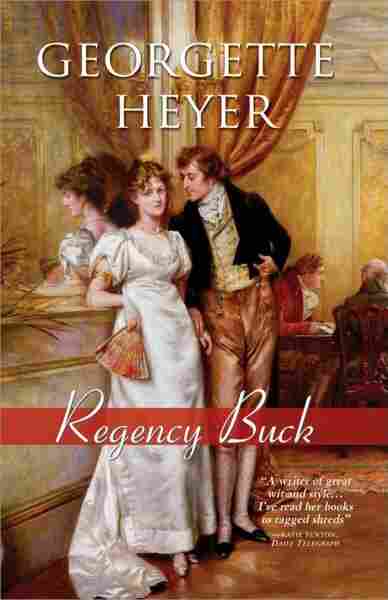 Excerpt from Chapter One

Newark was left behind and the post-chaise-and-four entered on a stretch of f lat country which offered little to attract the eye, or occasion remark. Miss Taverner withdrew her gaze from the landscape and addressed her companion, a fair youth who was lounging in his corner of the chaise somewhat sleepily surveying the back of the nearest post-boy.

'How tedious it is to be sitting still for so many hours at a stretch!' she remarked. 'When do we reach Grantham, Perry?'

Her brother yawned. 'Lord, I don't know! It was you who would go to London.'

Miss Taverner made no reply to this, but picked up a Traveller's Guide from the seat beside her, and began to flutter the leaves over. Young Sir Peregrine yawned again, and observed that the new pair of wheelers, put in at Newark, were good-sized strengthy beasts, very different from the last pair, which had both of them been touched in the wind.

Miss Taverner was deep in the Traveller's Guide, and agreed to this without raising her eyes from the closely printed page. She was a fine young woman, rather above the average height, and had been used for the past four years to hearing herself proclaimed a remarkably handsome girl. She could not, however, admire her own beauty, which was of a type she was inclined to despise. She had rather have had black hair; she thought the fairness of her gold curls insipid. Happily, her brows and lashes were dark, and her eyes which were startlingly blue (in the manner of a wax doll, she once scornfully told her brother) had a directness and a fire which gave a great deal of character to her face. At first glance one might write her down a mere Dresden china miss, but a second glance would inevitably discover the intelligence in her eyes, and the decided air of resolution in the curve of her mouth.

She was dressed neatly, but not in the first style of fashion, in a plain round gown of French cambric, frilled round the neck with scolloped lace; and a close mantle of twilled sarcenet. A pokebonnet of basket-willow with a striped velvet ribbon rather charmingly framed her face, and a pair of York tan gloves were drawn over her hands, and buttoned tightly round her wrists.

Her brother, who had resumed his slumbrous scrutiny of the post-boy's back, resembled her closely. His hair was more inclined to brown, and his eyes less deep in colour than hers, but he must always be known for her brother. He was a year younger than Miss Taverner, and, either from habit or carelessness, was very much in the habit of permitting her to order things as she chose.

'It is fourteen miles from Newark to Grantham,' announced Miss Taverner, raising her eyes from the Traveller's Guide. 'I had not thought it had been so far.' She bent over the book again. 'It says here – it is Kearsley's Entertaining Guide, you know, which you procured for me in Scarborough – that it is a neat and populous town on the River Witham. It is supposed to have been a Roman station, by the remains of a castle which have been dug up. I must say, I should like to explore there if we have the time, Perry.'

'Oh, lord, you know ruins always look the same!' objected Sir Peregrine, digging his hands into the pockets of his buckskin breeches. 'I tell you what it is, Judith: if you're set on poking about all the castles on the way we shall be a full week on the road. I'm all for pushing forward to London.'

'Very well,' submitted Miss Taverner, closing the Traveller's Guide, and laying it on the seat. 'We will bespeak an early breakfast at the George, then, and you must tell them at what hour you will have the horses put-to.'

'I thought we were to lie at the Angel,' remarked Sir Peregrine. 'No,' replied his sister decidedly. 'You have forgot the wretched account the Mincemans gave us of the comfort to be had there. It is the George and I wrote to engage our rooms, on account of Mrs Minceman warning me of the fuss and to-do she had once when they would have had her go up two pair of stairs to a miserable apartment at the back of the house.'

Sir Peregrine turned his head to grin amicably at her. 'Well, I don't fancy they'll succeed in fobbing you off with a back room, Ju.'

'Certainly not,' replied Miss Taverner, with a severity some - what belied by the twinkle in her eye.

'No, that's certain,' pursued Peregrine. 'But what I'm waiting to see, my love, is the way you'll handle the old man.'

Miss Taverner looked a little anxious. 'I could handle Papa, Perry, couldn't I? If only Lord Worth is not a subject to gout! I think that was the only time when Papa became quite un manageable.'

'All old men have gout,' said Peregrine. Miss Taverner sighed, acknowledging the truth of this pronouncement.

'It's my belief,' added Peregrine, 'that he don't want us to come to town. Come to think of it, didn't he say so?'

Miss Taverner loosened the strings of her reticule, and groped in it for a slender packet of letters. She spread one of these open. '"Lord Worth presents his compliments to Sir Peregrine and Miss Taverner and thinks it inadvisable for them to attempt the fatigues of a journey to London at this season. His lordship will do himself the honour of calling upon them in Yorkshire when next he is in the North." And that,' concluded Miss Taverner, 'was written three months ago – you may see the date for yourself, Perry: 29th June, 1811 – and not even in his own hand. I am sure it is a secretary wrote it, or those horrid lawyers. Depend upon it, Lord Worth has forgotten our very existence, because you know all the arrangements about the money we should have were made by the lawyers, and whenever there is any question to be settled it is they who write about it. So if he does not like us to come to London it is quite his fault for not having made the least attempt to come to us, or to tell us what we must do. I think him a very poor guardian. I wish my father had named one of our friends in Yorkshire, someone we are acquainted with. It is very disagreeable to be under the gover - nance of a stranger.'

'Well, if Lord Worth don't want to be at the trouble of ordering our lives, so much the better,' said Peregrine. 'You want to cut a dash in town, and I daresay I can find plenty of amusement if we haven't a crusty old guardian to spoil the fun.'

'Yes,' agreed Miss Taverner, a trifle doubtfully. 'But in common civility we must ask his permission to set up house in London. I do hope we shall not find him set against us, regarding it as an imposition, I mean; perhaps thinking that my uncle might rather have been appointed than himself. It must appear very singular to him. It is an awkward business, Perry.'

A grunt being the only response to this, she said no more, but leaned back in her corner and perused the unsatisfactory communications she had received from Lord Worth. It was an awkward business. His lordship, who must, she reflected, be going on for fifty-five or fifty-six years of age, showed a marked disinclination to trouble himself with the affairs of his wards, and although this might in some circumstances be reckoned a good, in others it must be found to be a pronounced evil. Neither she nor Peregrine had ever been farther from home than to Scarborough. They knew nothing of London, and had no acquaintance there to guide them. The only persons known to them in the whole town were their uncle, and a female cousin living respectably, but in a small way, in Kensington. This lady Miss Taverner must rely upon to present her into society, for her uncle, a retired Admiral of the Blue, had lived upon terms of such mutual dislike and mistrust with her father as must preclude her from seeking either his support or his acquaintance.