Seasonal Recipes From Market To Table

The chef of one of the finest restaurant's in America, Lucques, introduces her Sunday supper recipes, organized according to season, to demonstrate the importance of fresh ingredients combined in unexpected ways, featuring a wide array of appetizers, main courses, side dishes, and desserts. 30,000 first printing.

May 26, 2006 • Bonny Wolf recommends Sunday Suppers at Lucques in her annual roundup of summer cookbook choices: It's "a beautiful cookbook for when you want to spend more time cooking. Directions are easy to follow, but these are not quick meals and include some hard-to-find ingredients."

Dive into a Sea of Good Summer Food

May 26, 2006 • Summer is the time to eat. There's no better opportunity to make the most of what the season — and your local farmer's stand — have to offer. Cookbooks can help. Food writer Bonny Wolf rounds up 10 to take you through the season.

Dive into a Sea of Good Summer Food 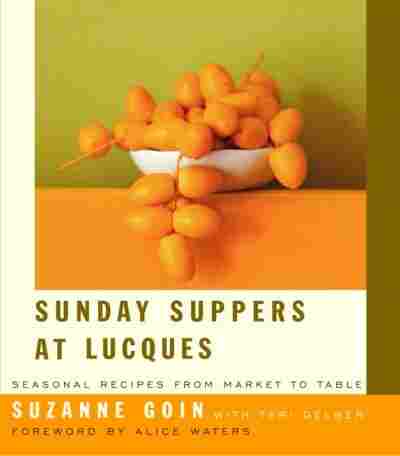 Only on St. Patrick's Day is it imperative that both your ice cream and your cake contain beer. Not your typical chocolate cake, this chocolate-stout cake has an unexpected kick to it. The addition of molasses, cloves, cinnamon, and nutmeg steers it into the spice cake category, with chocolate undertones and an undefinable depth from the dark, full-bodied stout.
For me, the biggest surprise of this dessert is the Guinness ice cream. I'm a vanilla girl all the way, and when chefs use weird ingredients just for the sake of being different, I usually pass. But here the dark beer flavor really works in the ice cream to complement the cake. A touch spicy, it might just cure a hangover.

3. Pour the beer and molasses into a medium pot, whisk together, and bring to a boil over medium-high heat. Remove from the heat, and whisk in the baking soda. Don't be surprised when it foams up.

4. In another bowl, whisk together the eggs and both sugars, mixing well to combine. Whisk in the oil, and then the beer mixture.

5. Make a well in the center of the dry ingredients. Pour in the liquid ingredients, whisking slowly until just incorporated. Be careful not to overmix or the cake will be tough.

6. Pour the batter into a lightly buttered Bundt pan and bake 30 minutes. The cake is done when it begins to pull away from the sides of the pan and the top surface is just starting to crack. When you insert a skewer into the center, it should come out mostly clean. To keep the cake moist, cover it with a dry kitchen towel as it cools. After 30 minutes, invert the cake onto a platter.

7. Serve slices of the cake with scoops of the Guinness ice cream.

1. Split the vanilla bean in half lengthwise. Using a paring knife, scrape the seeds and pulp into a medium saucepan. Add the vanilla pod, milk, and cream, and bring to a boil over medium heat. Turn off the heat, cover, and allow the flavors to infuse for 30 minutes.

2. While the cream is infusing, whisk the beer and molasses together in a small saucepan, bring to a boil, and then turn off the heat.

3. Whisk the egg yolks, sugar, and vanilla extract together in a bowl. Whisk a few tablespoons of the warm cream mixture into the yolks to temper them. Slowly, add another ¼ cup or so of the warm cream, whisking continuously. At this point you can add the rest of the cream mixture in a slow, steady stream, whisking continuously. Pour the mixture back into the pot, and return to the stove.

4. Stir the beer mixture into the cream and cook the custard over medium heat, 6 to 8 minutes, stirring frequently with a rubber spatula and scraping the bottom and sides of the pan. The custard will thicken and when it's done will coat the back of the spatula. Strain the mixture, and chill at least 2 hours in the refrigerator. When the custard is very cold, process it in an ice cream maker according to the manufacturer's instructions.

This recipe is a lifer. I’ve been making it for more than 20 years, and every time I try to file it away, someone inevitably comes along asking for it. I brought it to my first staff get-together when I was working at Chez Panisse and, from then on, for all of the parties that followed, when I would even think of making something different, my friends and coworkers would cry out for this caramelized chocolate bread pudding. A few years later, the bread pudding gained an East Coast fan club, too. I was working at Alloro, a tiny restaurant in Boston’s Italian district. Back then, the Mafia owned all the local cafés and had a monopoly on the dessert-and-coffee crowd. Whereas the other (probably wiser) restaurants on the street obeyed the unspoken law of not selling dessert, at Alloro we broke the rule and secretly served this bread pudding to our in-the-know customers. We worked hard to keep the highly requested dessert under cover, and it seems we succeeded: both the recipe and I are still around.

A few things make this bread pudding better than most. I love custards and am often disappointed by bread puddings with too much bread and not enough pudding. So be careful to use just a single layer of brioche, which creates a crispy crust but won’t absorb all the rich, silky custard underneath. Once you break through the caramelized, toasty top layer and dig down through the luscious custard, a treasure of melted chocolate awaits you at the bottom.

Preheat the oven to 350°F. Spread the softened butter on one side of the brioche. Cut each slice in half on the diagonal and then again into quarters.

Whisk together the eggs, egg yolks, and brown sugar in a large bowl. Add the cream, milk, vanilla, cinnamon, nutmeg, and salt, whisking to combine well.

Sprinkle the chocolate over the bottom of a 9-by-9-inch (or equivalent) baking dish. Arrange the brioche, buttered side up, with slices overlapping just slightly, on the chocolate (there should be just a single layer of bread). Pour the custard over the bread, pressing down with your fingers to make sure the bread soaks it up. Place the bread pudding in a roasting pan, and pour warm water into the pan to come halfway up the sides of the pudding dish. Bake about 1 hour and 15 minutes, until the custard is set and the bread puffs up slightly. The pudding will be springy to the touch.

If you have a kitchen blowtorch, sprinkle the sugar over the top, and torch to brown and caramelize. You could run the pudding under the broiler to caramelize if you don’t have a torch, but be careful not to curdle the custard underneath. Serve the bread pudding from the baking dish at the table, using a big spoon.

The colored beets and bright green arugula in this dish make for a visually stunning presentation. The sweet roasted beets marinated in lemon vinaigrette play off the pure white fish and horseradish cream. Look for a few different types of beets, such as golden beets and Chioggia beets, and dress them separately, so the dark ones don’t bleed their juices onto the lighter ones. In the spring, you could make this dish with wild salmon.

Season the fish with lemon zest and herbs, roast the beets, and make the vinaigrette and horseradish cream in advance. When it’s time for dinner, all you’ll have to do is sauté the fish and dress the beets.

6 halibut fillets, 5 to 6 ounces each

Season the fish with the lemon zest, thyme, and parsley. Cover, and refrigerate at least 4 hours or overnight.

Remove the fish from the refrigerator 15 minutes before cooking, to bring it to room temperature.

Heat a large sauté pan over high heat for 2 minutes. (Depending on the size of your pan, you may need to cook the fish in batches or in two pans.) Season the fish on both sides with salt and pepper. Swirl the regular extra-virgin olive oil into the pan and wait 1 minute. Carefully lay the fish in the pan, and cook 3 to 4 minutes, until it’s lightly browned. Turn the fish over, lower the heat to medium-low, and cook a few more minutes, until it’s almost cooked through. Be careful not to overcook the fish. When it’s done, the fish will begin to flake and separate a little, and the center will still be slightly translucent. Remember, the halibut will continue to cook for a bit once you take it out of the pan.

Cut off the beet greens, leaving 1/2 inch of the stems still attached. (You can save the leaves for sauteing later—they are delicious!) Clean the beets well, and toss them with 2 tablespoons olive oil and 1 teaspoon salt.

Place the beets in a roasting pan with a splash of water in the bottom. Cover the pan tightly with foil, and roast for about 40 minutes, until they’re tender when pierced. (The roasting time will depend on the size and type of beet.) When the beets are done, carefully remove the foil. Let cool, and peel the beets by slipping off the skins with your fingers. Cut them into 1/2-inch-thick wedges.

While the beets are in the oven, combine the diced shallot, both vinegars, 2 teaspoons lemon juice, and 1/4 teaspoon salt in a small bowl, and let sit 5 minutes. Whisk in the 1/2 cup olive oil. Taste for balance and seasoning.

Whisk the crème fraîche and horseradish together in a small bowl. Stir in the heavy cream, remaining 1/2 teaspoon lemon juice, 1/8 teaspoon salt, and a pinch of pepper.

Toss the beets and sliced shallots with the vinaigrette. (If you’re using different-colored beets, dress each color in a separate bowl so the colors don’t bleed.) Season with 1/4 teaspoon salt and a pinch of freshly ground black pepper, and toss well. Taste for balance and seasoning.