A Memoir of Sex, Drugs, and Stand-up

The English television personality reveals his struggles to become a successful comedian, discussing his troubled childhood, his addiction to drugs, sex, and alcohol, his mental illness, and his recovery aided by the support of his family and friends.

NPR stories about My Booky Wook

December 30, 2009 • The British are crazy for actor and comedian Russell Brand, but he's not content to stop with his compatriots. With a comic triumph as a bad-boy rocker in Forgetting Sarah Marshall and a startlingly frank memoir called My Booky Wook, Brand is shooting for Stateside stardom.

Russell Brand: Standing Up To Addiction

April 6, 2009 • British comic Russell Brand is known for his outlandish appearance, sharp wit and no-holds-barred language. He's put his over-the-top comedy on the page with his new memoir My Booky Wook: A Memoir of Sex, Drugs, and Stand-up.

Russell Brand: Standing Up To Addiction

A Comedian's Memoir Of Sex, Drugs And Stand-Up

March 14, 2009 • Best known in the U.S. for his role as a caddish rocker in the film Forgetting Sarah Marshall , British comedian Russell Brand details his addictions to heroin, sex and performing in his new memoir, My Booky Wook.

A Comedian's Memoir Of Sex, Drugs And Stand-Up 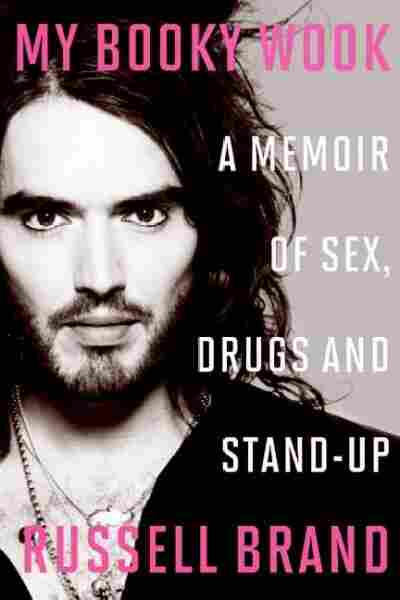 A Memoir of Sex, Drugs, and Stand-Up

On the morning of April Fools' Day, 2005, I woke up in a sexual addiction treatment center in a suburb of Philadelphia. As I limped out of the drab dog's bed in which I was expected to sleep for the next thirty wankless nights, I observed the previous incumbent had left a thread of unravelled dental floss by the pillow-most likely as a noose for his poor, famished dinkle.

When I'd arrived the day before, the counselors had taken away my copy of the Guardian, as there was a depiction of the Venus de Milo on the front page of the Culture section, but let me keep the Sun, which obviously had a Page 3 lovely. What kind of pervert police force censors a truncated sculpture but lets Keeley Hazell pass without question? "Blimey, this devious swine's got a picture of a concrete bird with no arms-hanging's too good for him, to the incinerator! Keep that picture of stunner Keeley though." If they were to censor London Town they would ignore Soho but think that the statue of Alison Lapper in Trafalgar Square had been commissioned by Caligula.

Being all holed up in the aptly named KeyStone clinic (while the facility did not have its own uniformed police force, the suggestion of bungling silent film cops is appropriate) was an all too familiar drag. Not that I'd ever been incarcerated in sex chokey before, lord no, but it was the umpteenth time that I'd been confronted with the galling reality that there are things over which I have no control and people who can force their will upon you. Teachers, sex police, actual police, drug counselors; people who can make you sit in a drugless, sexless cell either real or metaphorical and ponder the actuality of life's solitary essence. In the end it's just you. Alone.

Who needs that grim reality stuffed into their noggin of a morning? Not me. I couldn't even distract myself with a wank over that gorgeous slag Venus de Milo; well, she's asking for it, going out all nude, not even wearing any arms.

The necessity for harsh self-assessment and acceptance of death's inevitability wasn't the only thing I hated about that KeyStone place. No, those two troubling factors vied for supremacy with multitudinous bastard truths. I hated my fucking bed: the mattress was sponge, and you had to stretch your own sheet over this miserable little single divan in the corner of the room. And I hated the fucking room itself where the strangled urges of onanism clung to the walls like mildew. I particularly hated the American gray squirrels that were running around outside-just free, like idiots, giggling and touching each other in the early spring sunshine. The triumph of these little divs over our indigenous, noble, red, British squirrel had become a searing metaphor for my own subjugation at the hands of the anti-fuck-Yanks. To make my surrender to conformity more official I was obliged to sign this thing (see page 6).

I wish I'd been photographed signing it like when a footballer joins a new team grinning and holding a pen. Or that I'd got an attorney to go through it with a fine-tooth comb: "You're gonna have to remove that no bumming clause," I imagine him saying. Most likely you're right curious as to why a fella who plainly enjoys how's yer father as much as I do would go on a special holiday to "sex camp" (which is a misleading title as the main thrust of their creed is "no fucking"). The short answer is I was forced. The long answer is this ...

Many people are skeptical about the idea of what I like to call "sexy addiction," thinking it a spurious notion, invented primarily to help Hollywood film stars evade responsibility for their unrestrained priapic excesses. But I reckon there is such a thing.

Addiction, by definition, is a compulsive behavior that you cannot control or relinquish, in spite of its destructive consequences. And if the story I am about to recount proves nothing else, it demonstrates that this formula can be applied to sex just as easily as it can be to drugs or alcohol.

Having successfully rid myself, one day at a time, in my twenties, of parallel addictions to the ol' drugs and drinks-if you pluralize drink to drinks and then discuss it with the trembling reverence that alcoholics tend to, it's funny, e.g., "My life was destroyed by drinks," "I valued drinks over my wife and kids." Drinks! I imagine them all lined up in bottles and glasses with malevolent intent, the bastards-I was now, at this time, doing a lot of monkey business.

I have always accrued status and validation through my indiscretions (even before I attained the unique accolade of "Shagger of the Year" from the Sun-not perhaps the greatest testimonial to the good work they do at KeyStone), but sex is also recreational for me. We all need something to help us unwind at the end of the day. You might have a glass of wine, or a joint, or a big delicious blob of heroin to silence your silly brainbox of its witterings, but there has to be some form of punctuation, or life just seems utterly relentless.

And this is what sex provides for me-a breathing space, when you're outside of yourself and your own head. Especially in the actual moment of climax, where you literally go, "Ah, there's that, then. I've unwound. I've let go." Not without good reason do the French describe an orgasm as a "little death." That's exactly what it is for me (in a good way though, obviously)-a little moment away, a holiday from my head. I hope death is like a big French orgasm, although meeting Saint Peter will be embarrassing, all smothered in grog and shrouded in post-orgasmic guilt.