Offers an opinionated compendium of pop culture lists and trivia on such topics as film, music, television, books, comics, and video games, including guest lists by the likes of Amy Sedaris and Weird Al Yankovic.

December 11, 2009 • Inventory, the new book of pop-culture lists from the publishers of The Onion, celebrates and skewers topics like pretentious musical instruments and songs about the horrors of bus travel. A.V. Club Managing Editor Josh Modell talks about some favorite lists with Scott Simon. 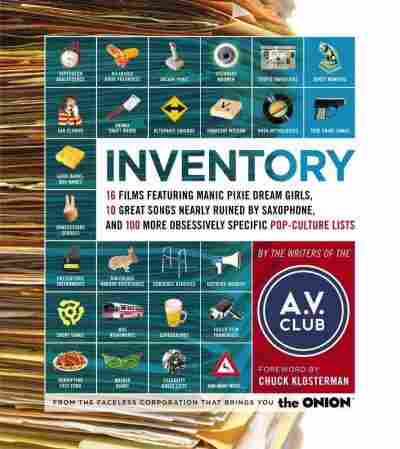 Take One Down, Pass It Around

1 Paul Simon, "50 Ways To Leave Your Lover"
Suggested courses of action: hopping on the bus, slipping out the back, making a new plan.

2 Lucky Starr, "I've Been Everywhere"
Some of the far-flung places the singer has been: Australian locations in the original, North America's Ferriday, La Paloma, Opelika, and Crater Lake (for Pete's sake) in later versions.

3 The Nails, "88 Lines About 44 Women"
A few of the women, and their defining characteristics: Tanya Turkish (liked to fuck), Terri (didn't give a shit), Patty (shot cough syrup in her veins).

6 Deirdre Flint, "Jenny Of 100 Dates"
Some of the terrible dates Jenny endures on her way to true love: an Amway salesman, a Catholic priest, an obsessive Baywatch fan, a Mormon looking for a seventh wife, a Montana militia leader, and a "gastronomic nightmare" who can't stop burping.

10 Pop Will Eat Itself, "Can U Dig It?"
Characters (real and fictional) endorsed by PWEI: Optimus Prime (but not Galvatron), Alan Moore, Dirty Harry, Bruce Wayne, Renegade Soundwave, AC/DC.

12 The Nails , "Things You Left Behind"
Some objects a lover failed to take with her upon leaving: stockings, beads, records, autographed picture of Junior Wells, a dozen contraceptive sponges. (Anyone here got a rhyme for "sponges"?)

13 Jim Carroll, "People Who Died"
Some of Jim's friends, and their paths to the other side: Teddy (fell from roof), Cathy (suicide by reds and wine), Bobby (leukemia), G-Berg and Georgie (hepatitis), Tony (couldn't fly).

14 R.E.M., "It's The End Of The World As We Know It (And I Feel Fine)"
Seemingly random items that may or may not relate to Armageddon: book-burning, bloodletting, tournament of lies, Leonid Brezhnev, Lenny Bruce, Lester Bangs. (Leonard Bernstein!)

15 Reunion, "Life Is A Rock, But The Radio Rolled Me"
So, what kind of music do you like?: Carly Simon; Denver, John; Osmond, Donnie.

21 Bing Crosby, "These Foolish Things"
Some of the foolish things that remind the poor singer of you: the scent of smoldering leaves, the wail of steamers, silk stockings thrown aside.

22 U2, "Numb"
Activities The Edge suggests you avoid: aping, gaping, shackling, compensating, filling out any forms, hovering at the gate.

23 The Psych edelic Furs, "All Of This And Nothing"
Things you left him that he couldn't understand: a picture of the Queen, a room full of your trash, a phonebook full of accidents, a visit from your doctor.

24 Steely Dan, "Things I Miss The Most"
Besides the talk and the sex: Eames chair (comfy), pans (good copper ones), Strat ('54), houses (Gulf Coast and Vineyard).

27 The Moonglows, "The Ten Commandments Of Love"
Thou shalt: have faith in everything he says and does, Kiss him when you hold him tight, treat him sweet and gentle.

28 The Notorious B.I.G., "Ten Crack Commandments"
Selected advice for street-level entrepreneurs: Don't share information about your personal finances, don't trust anyone — even your own mother, never use your own product, do not extend credit to drug addicts.

29 Prince Buster, "10 Commandments"
Bible-inspired instructions for loving Prince Buster: Thou shalt not search his pockets at night, annoy him with hearsays, or covet thy neighbor's dress, shoes, bureau, bed, or hat. Also, if thou commit adultery, Prince Buster will murder you.

31 Hercules, "7 Ways To Jack"
Among numbered instructions for how to jack, a.k.a. dance sexily, in the '80s heyday of Chicago house music: visually touch the body in front of you, caress it with your eyes, drink it in slowly; close your eyes, remember the body you've just seen, then slowly undress it; lose complete mental control, begin to jack.

32 Scritti Politti, "Lions After Slumber"
My, my, my, he's got a lot of things, among them: charm, hunger, insulin, a refrigerator, drugs, drugs, drugs.

33 Ice-T, "99 Problems"
Types of hos and/or bitches in Ice-T's possession: one from the east, one that likes to jack it off and rub it in her chest, one with a posterior the size of a television, one who favors velvet in the color blue, one whose breasts give powdered milk.

36 George Gershwin, "They All Laughed"
Ultimately successful people who were initially laughed at, and why: Christopher Columbus (thinking the world was round), Edison (because he recorded sound), Marconi (because wireless was a phony).

37 Material Issue, "Goin' Through Your Purse"
Items carefully returned to your handbag after surreptitious rummaging: makeup, compact, lipstick (shit like that), keys, cigarettes, his lighter, picture of sister, picture of mother, picture of all the guys who date you, high-school graduation ring, check stub, and poetry from some stupid jerk who's trying to steal your heart away.

40 Ian Dury & The Blockheads, "Reasons To Be Cheerful"
Just a few of the many, many things that kept Dury going: yellow socks, carrot juice, parrot smiles, acne-free days, Dominicker camels, all other mammals, sitting on the potty, curing smallpox, saying "hokey-dokey," and bottoms (round or skinny, no preference).

43 Willie Dixon, "29 Ways"
Just a few of the routes to Dixon's baby: through the chimney like Santa, a hidden door behind the grandfather clock, a hole in the bedroom floor.

44 Amy Rigby, "20 Questions"
Some of the interrogatives presented forcefully and then pitifully: why he's coming in at 3 a.m., why he didn't call, whether he loves her, whether he ever loved her.

45 Nick Drake, "One Of These Things First"
Things Nick Drake could have been: sailor, cook, signpost, clock, pillar, flute.