by James Agee and Walker Evans

An illustrated portrayal of three Alabama sharecropper families in 1936 examines their everyday existence in poverty.

Three Trips To The Other Side Of The Tracks

March 4, 2010 • The Los Angeles Gang Tours put a spotlight on poverty tourism, but the phenomenon isn't new. Authors writing about class have been giving views of the other side for years. Writer Leslie Jamison shares three memoirs whose accounts define the line between rubbernecking and true works of art. 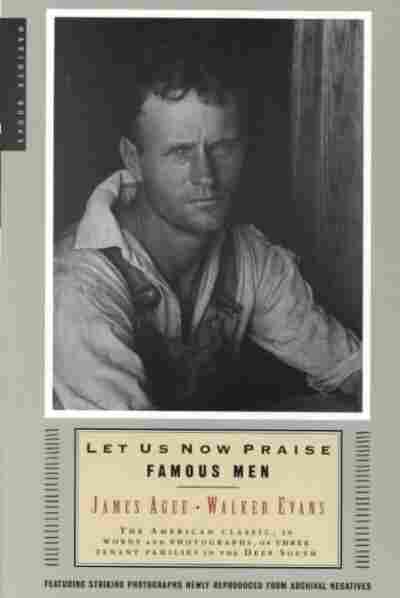 But now three others stood in the outskirts who had been sent for by a
running child; they were young men, only twenty to thirty, yet very old
and sedate; and their skin was of that sootiest black which no light
can make shine and with which the teeth are blue and the eyeballs gold.
They wore pressed trousers, washed shoes, brilliantly starched white
shirts, bright ties, and carried newly whited straw hats in their
hands, and at their hearts were pinned the purple and gilded ribbons of
a religious and burial society. They had been summoned to sing for
Walker and for me, to show us what nigger music is like (though we had
done all we felt we were able to spare them and ourselves this
summons), and they stood patiently in a stiff frieze in the oak shade,
their hats and their shirts shedding light, and were waiting to be
noticed and released, for they had been on their way to church when the
child caught them; and now that they were looked at and the order given
they stepped forward a few paces, not smiling, and stopped in rigid
line, and, after a constricted exchange of glances among themselves,
the eldest tapping the clean dirt with his shoe, they sang. It was as I
had expected, not in the mellow and euphonious Fisk Quartette style,
but in the style I have heard on records by Mitchell's Christian
Singers, jagged, tortured, stony, accented as if by hammers and cold-
chisels, full of a nearly paralyzing vitality and iteration of rhythm,
the harmonies constantly splitting the nerves; so that of western music
the nearest approach to its austerity is in the first two centuries of
polyphony. But here it was entirely instinctual; it tore itself like a
dance of sped plants out of three young men who stood sunk to their
throats in land, and whose eyes were neither shut nor looking at
anything; the screeching young tenor, the baritone, stridulant in the
height of his register, his throat tight as a fist, and the bass,
rolling the iron wheels of his machinery, his hand clenching and
loosening as he tightened and relaxed against the spraining of his
ellipses: and they were abruptly silent; totally wooden; while the
landowner smiled coldly. There was nothing to say. I looked them in the
eyes with full and open respect and said, that was fine. Have you got
time to sing us another? Their heads and their glances collected toward
a common center, and restored, and they sang us another, a slow one
this time; I had a feeling, through their silence before entering it,
that it was their favorite and their particular pride; the tenor lifted
out his voice alone in a long, plorative line that hung like fire on
heaven, or whistle's echo, sinking, sunken, along descents of a
modality I had not heard before, and sank along the arms and breast of
the bass as might a body sunken from a cross; and the baritone lifted a
long black line of comment; and they ran in a long and slow motion and
convolution of rolling as at the bottom of a stormy sea, voice meeting
voice as ships in dream, retreated, met once more, much woven,
digressions and returns of time, quite tuneless, the bass, over and
over, approaching, drooping, the same declivity, the baritone taking
over, a sort of metacenter, murmuring along monotones between major and
minor, nor in any determinable key, the tenor winding upward like a
horn, a wire, the flight of a bird, almost into full declamation, then
failing it, silencing; at length enlarging, the others lifting, now,
alone, lone, and largely, questioning, alone and not sustained, in the
middle of space, stopped; and now resumed, sunken upon the bosom of the
bass, the head declined; both muted, droned; the baritone makes his
comment, unresolved, that is a question, all on one note: and they are
quiet, and do not look at us, nor at anything.
The landlord objected that that was too much howling and too much
religion on end and how about something with some life to it, they knew
what he meant, and then they could go.
They knew what he meant, but it was very hard for them to give it just
now. They stiffened in their bodies and hesitated, several seconds, and
looked at each other with eyes ruffled with worry; then the bass
nodded, as abruptly as a blow, and with blank faces they struck into a
fast, sassy, pelvic tune whose words were loaded almost beyond
translation with comic sexual metaphor; a refrain song that ran like a
rapid wheel, with couplets to be invented, progressing the story; they
sang it through four of the probably three dozen turns they knew, then
bit it off sharp and sharply, and for the first time, relaxed out of
line, as if they knew they had earned the right, with it, to leave.
Meanwhile, and during all this singing, I had been sick in the
knowledge that they felt they were here at our demand, mine and
Walker's, and that I could communicate nothing otherwise; and now, in a
perversion of self-torture, I played my part through. I gave their
leader fifty cents, trying at the same time, through my eyes, to
communicate much more, and said I was sorry we had held them up and
that I hoped they would not be late; and he thanked me for them in a
dead voice, not looking me in the eye, and they went away, putting
their white hats on their heads as they walked into the sunlight.

At the Forks
O n a road between the flying shadows of loose woods toward the middle
of an afternoon, far enough thrust forward between towns that we had
lost intuition of our balance between them, we came to a fork where the
sunlight opened a little more widely, but not on cultivated land, and
stopped a minute to decide.
Marion would lie some miles over beyond the road on our left; some
other county seat, Centerville most likely, out beyond the road on our
right; but on which road the woods might give way to any extension of
farm country there was no deducing: for we were somewhere toward the
middle of one of the wider of the gaps on the road map, and had seen
nothing but woods, and infrequent woods farms, for a good while now.
Just a little behind us on our left and close on the road was a house,
the first we had passed in several miles, and we decided to ask
directions of the people on the porch, whom, in the car mirror, I could
see still watching us. We backed slowly, stopping the car a little
short of the house, and I got slowly out and walked back toward them,
watching them quietly and carefully, and preparing my demeanors and my
words for the two hundredth time.
*
There were three on the porch, watching me, and they must not have
spoken twice in an hour while they watched beyond the rarely traveled
road the changes of daylight along the recessions of the woods, and
while, in the short field that sank behind their house, their two crops
died silently in the sun: a young man, a young woman, and an older man;
and the two younger, their chins drawn inward and their heads tall
against the grained wall of the house, watched me steadily and sternly
as if from beneath the brows of helmets, in the candor of young
warriors or of children.
They were of a kind not safely to be described in an account claiming
to be unimaginative or trustworthy, for they had too much and too
outlandish beauty not to be legendary. Since, however, they existed
quite irrelevant to myth, it will be necessary to tell a little of
them.
The young man's eyes had the opal lightings of dark oil and, though he
was watching me in a way that relaxed me to cold weakness of
ignobility, they fed too strongly inward to draw to a focus: whereas
those of the young woman had each the splendor of a monstrance, and
were brass. Her body also was brass or bitter gold, strong to stridency
beneath the unbleached clayed cotton dress, and her arms and bare legs
were sharp with metal down. The blenched hair drew her face tight to
her skull as a tied mask; her features were baltic. The young man's
face was deeply shaded with soft short beard, and luminous with death.
He had the scornfully ornate nostrils and lips of an aegean exquisite.
The fine wood body was ill strung, and sick even as he sat there to
look at, and the bone hands roped with vein; they rose, then sank, and
lay palms upward in his groins. There was in their eyes so quiet and
ultimate a quality of hatred, and contempt, and anger, toward every
creature in existence beyond themselves, and toward the damages they
sustained, as shone scarcely short of a state of beatitude; nor did
this at any time modify itself.
These two sat as if formally, or as if sculptured, one in wood and one
in metal, or as if enthroned, about three feet apart in straight chairs
tilted to the wall, and constantly watched me, all the while
communicating thoroughly with each other by no outward sign of word or
glance or turning, but by emanation.
The other man might have been fifty by appearance, yet, through a
particular kind of delicateness upon his hands, and hair, and skin —
they were almost infantine — I was sure he was still young, hardly out
of his twenties, though again the face was seamed and short as a fetus.
This man, small-built and heavy jointed, and wandering in his motions
like a little child, had the thorny beard of a cartoon bolshevik, but
suggested rather a hopelessly deranged and weeping prophet, a D. H.
Lawrence whom male nurses have just managed to subdue into a
straitjacket. A broken felt hat struck through with grass hair was
banged on flat above his furious and leaky eyes, and from beneath its
rascally brim as if from ambush he pored at me walleyed while,
clenching himself back against the wall, he sank along it trembling and
slowly to a squat, and watched up at me.