How DARPA Is Remaking Our World, from the Internet to Artificial Limbs

Title
The Department of Mad Scientists
Subtitle
How DARPA Is Remaking Our World, from the Internet to Artificial Limbs
Author
Michael Belfiore

Details the efforts of the Defense Advanced Research Projects Agency, a controversial agency whose futuristic work has had an amazing military and civilian application, from driverless cars to mind-controlled robotic limbs.

NPR stories about The Department of Mad Scientists

November 15, 2009 • If you've used a GPS system — or if you happen to be using the Internet to read this — you can thank DARPA, the Defense Advanced Research Projects Agency. For 50 years, the smallish, somewhat secretive division of the Pentagon has been mostly off-limits to reporters. Now author Michael Belfiore has profiled the agency in a new book.

November 10, 2009 • When Marine engineer Jonathan Kuniholm returned to his industrial-design shop after a tour of duty in Iraq, one of his first projects was personal: He wanted to improve on the design of the prosthetics he'd been using since he lost part of his right arm in an ambush. Kuniholm and his colleagues founded the Open Prosthetics Project, an open-source collaboration that shares its innovations freely.

Excerpt: The Department Of Mad Scientists 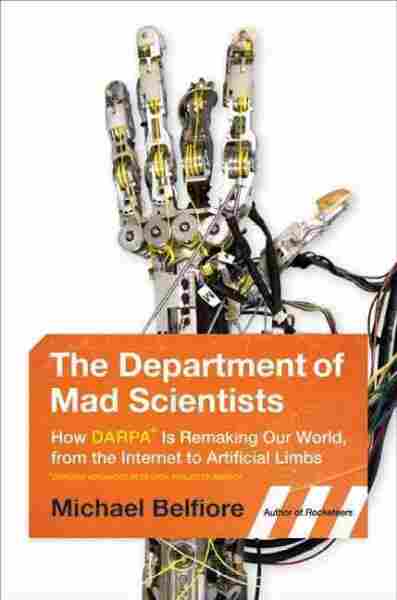 How DARPA Is Remaking Our World, from the Internet to Artificial Limbs


An Arm and a Leg

The twin-engine riverine craft sliced through the Euphrates River a little more than one hundred miles as the crow flies northwest of Baghdad. Marines attached to the First Battalion, Twenty-third Marine Regiment, on board scanned the shoreline for signs of trouble. There, in a palm grove where the river made its first of many bends on its meandering way from the Haditha Dam to the Persian Gulf, another patrol had been attacked by insurgents just minutes earlier, and these marines aimed to weed them out. The marines were based at the dam itself. Their job was to protect the facility that generated fully a third of Iraq's power and to keep the stretch of river above and below the dam clear of insurgents. It was New Year's Day 2005.

The pilot beached the craft on the sandy bank of the river, and the marines jumped out, rifles at the ready, fanning out as they headed into the grove. The battalion's engineer, thirty-three-year-old reservist Captain Jon Kuniholm kept a wary eye out for improvised explosive devices, or IEDs. The insidious roadside bombs had been taking a heavy toll on U.S. soldiers in Iraq since the war began in 2003, and Kuniholm, with the help of his design start-up in his hometown of Durham, North Carolina, had been building a robot that could move ahead of patrols and defuse bombs before they went off. Finding the carefully hidden bombs was an altogether different task, however. They could be concealed in anything, buried anywhere, triggered by anything from a cell phone to a garage door opener—like the one in the discarded olive oil can that Kuniholm had just enough time to register before it exploded.

The blast blew him off his feet. He lay dazed as insurgents opened up with automatic rifles, machine guns, and rocket-propelled grenades. Kuniholm struggled to rise, searching for his M4 carbine, which, it turned out, had been torn in half by the explosion. And that's when he saw that his right forearm was dangling from the rest of his arm below the elbow on a strip of flesh only a couple of inches wide. "Fuck," he said. He got to his feet and, holding his severed right hand in his left, he ran to the cover of a nearby agricultural pump house, where he waited for the aid of a corpsman.

By the time the rest of the marines were able to beat an orderly retreat back to the patrol boat, one of their number had been fatally injured and several others had received lesser wounds. The day had not gone at all well for the patrol, and with the adrenaline rush that had been keeping him going wearing off, and grayness creeping in around the edges of his vision, Kuniholm told the others that he wasn't feeling so hot, and that if everyone was on board, they should get back to their base at the dam.

So began Kuniholm's long road home, from the base at Haditha to a field hospital at Al Asad, where surgeons finished the job the IED had started by taking off the rest of his forearm, then to Germany for more treatment, and finally home to North Carolina, for yet more surgery at Duke University Medical Center. From there it was on to the army's Walter Reed Medical Center, in Washington, D.C., to be fitted with a prosthetic arm. Actually, a trio of arms.

Like veterans since World War I, Kuniholm got a simple body-operated hook that he could open and close with the shrug of a shoulder or by extending the remaining portion of his arm. His movements pulled on a cable that was attached to the hook at one end and to the harness that held the prosthetic in place at the other. Great for everyday use, and durable, the thing lacked a certain panache, however—which Kuniholm's so-called myoelectric arm sought to provide. Heavy, relatively fragile, and limited in function, the myoelectric arm nevertheless represented the state-of-the-art in prosthetics. Electrodes embedded in a flexible liner worn beneath the arm's carbon-fiber sleeve picked up the electrical signals generated by the firing of the residual muscles in Kuniholm's forearm. Microchips translated those signals into commands to open and close the fingers of the prosthetic hand, which could take the form of either a hook or a cosmetically appealing but less functional hand. The device was more lifelike in appearance than the hook prosthesis, and was therefore less intimidating to able-bodied onlookers. But it couldn't be worn long without discomfort, it had to be kept from getting wet and dirty, and Kuniholm generally got less use out of it than the hook or the third arm, which was shorter than the other two and suitable for holding a pencil or pen. His experience with the myoelectric arm was typical. Michael Weisskopf, a journalist who lost his right arm below the elbow while riding with troops in Iraq in 2003, wrote of his struggles with his own myoeletric prosthetic arm in his book Blood Brothers.

If my former right hand floated lightly the fake one moved like a dumbbell—fat, clunky, and heavy. Its two and a half pounds were concentrated in the electronic hand—the place farthest from the half forearm. The prosthesis made my arm crook out like Popeye's; my range of motion was so limited that I couldn't raise the hand within a foot of my mouth. I kept bumping it into things. I gave up on long-sleeved shirts. They didn't fit over the bulging battery box or couldn't be buttoned over the thick prosthetic wrist. I named it Ralph, after the clumsiest kid in my grade school.

Back in his design shop, Kuniholm and his colleagues took his prosthetic arms apart and were less than impressed by what they found. They figured they could do better with a more functional design, and they made prosthetic design a major part of the work of their company, Tackle Design. Inspired by the open source (i.e., free) model of software development, they launched an online design forum called the Open Prosthetics Project, inviting contributions from anyone who cared to make them. And Kuniholm joined a DARPA project called Revolutionizing Prosthetics.

Revolutionizing Prosthetics was started in 2005 by DARPA program manager Geoffrey Ling. An army colonel and intensive-care unit doctor, Ling is one of the just 10 percent of DARPA program managers who also serve as active-duty military officers. He shrugs off the suggestion that this makes him unusual at an already extraordinary place to work. "All of us have a research background," he told me of himself and his military colleagues at DARPA, "so I don't think we're all that different from our civilian counterparts in terms of our background and training. It's just that we happen to wear a uniform."

But that uniform has led him to places that many of his civilian colleagues must learn about from afar as they seek ways to better equip their uniformed "customers" (for lack of a better word). Ling has served two tours of duty in combat zones, one in Afghanistan, the other in Iraq. He served the latter tour after he joined DARPA, which makes him even rarer—an active-duty DARPA program manager who has served in both capacities in wartime in a combat zone.

All of which far more than informs his work at DARPA. It utterly defines it.

Colonel Ling is a Chinese American born in Baltimore and raised in New York City. He bursts with energy when he talks of his life's mission to care for wounded soldiers. The words tumble out as fast as he can form them. Time, you get the feeling from listening to Ling, is most definitely not on his side, and like so many others at DARPA, he spends his life in fast-forward. More than that, time's not on the side of the wounded he cares for—young men and women in uniform (and in many cases, even children), wounded in combat. His signature program, Revolutionizing Prosthetics, he likes to say, is not a science project; it's something we have to complete right now, to help these people.

Ling is unapologetically patriotic. "And if I sound like a flag-waver," he tells me, "tough. That's what I am. I mean, I'm not a sixties guy who wants to spit on the flag and spit on soldiers when they come back. That's a lot of bullshit." His deepest passion is to help the young men and women giving their all for their country. The politicians at home might put the cost of the ongoing wars in Iraq and Afghanistan in terms of the tremendous drain on the U.S. Treasury, but for an appalling number of those who returned from their deployments, the war quite literally cost an arm or a leg. Each one of those soldiers, Ling feels strongly, has to—simply has to—receive the very highest level of support. "We have got to put our resources and take care of [the soldier]. Because he's representing us in the most positive way possible. Forget the politicians. It's young Americans like that who represent us." Ling's program is dedicated to the soldiers, but he also feels strongly that the technology has to be shared with the rest of the world. "And we're going to do it," he says. "It's America again doing the best things that America can do, which is showing that . . . we are a superpower that really tries to take care of the world."

Ling graduated from Cornell University, in Ithaca, New York, with a doctorate in pharmacology, in 1982, and then went on to earn his medical degree from Georgetown University, in Washington, D.C., in 1989. Then he joined the army, "which was really kind of great," he says. "The army was very good to me. I'm one of those happy guys." After he finished basic training, he got assigned to the Uniformed Services University of the Health Sciences, the military medical school in Bethesda, Maryland. There he treated patients, taught med students, and ran a research lab. He completed a neurology residency at Walter Reed Medical Center and then trained in neurocritical care at Johns Hopkins University, developing a specialty in caring for traumatic brain injury in wounded soldiers...