Often described as "the Aeneid of rabbits," this is the story of young rabbit Fiver and his brother Hazel, who set out on an epic journey to find a new home after their own warren is destroyed. Watership Down began as a series of improvised stories author Richard Adams told his young daughters during car trips. Adams also invented the language, Lapine, spoken by Hazel and Fiver.

NPR stories about Watership Down

August 12, 2009 • As summer vacations draw to a close and school-age children begin the mad scramble to fulfill their summer reading obligations, author Lesley M. M. Blume recommends a few timeless books that may not be on the required book lists.

January 13, 2009 • The ABC series Lost may focus on a mystical island, but it's also about larger themes like religious faith and the importance of community — the stuff of memorable novels. 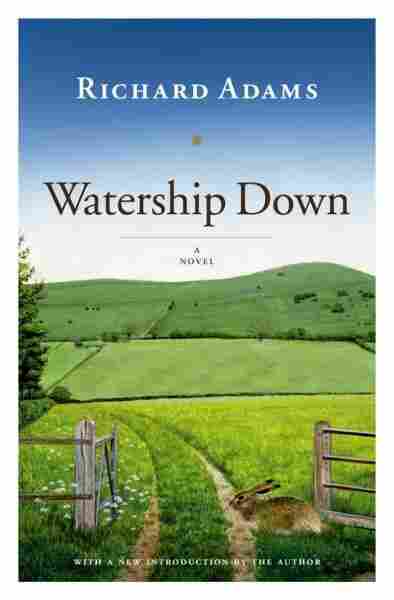 Chorus: Why do you cry out thus, unless at some vision of horror?
Cassandra: The house reeks of death and dripping blood.
Chorus: How so? 'Tis but the odor of the altar sacrifice.
Cassandra: The stench is like a breath from the tomb.

The primroses were over. Toward the edge of the wood, where the ground became open and sloped down to an old fence and a brambly ditch beyond, only a few fading patches of pale yellow still showed among the dog's mercury and the oak-tree roots. On the other side of the fence, the upper part of the field was full of rabbit holes. In places the grass was gone altogether and everywhere there were clusters of dry droppings, through which nothing but the ragwort would grow. A hundred yards away, at the bottom of the slope, ran the brook, no more than three feet wide, half choked with kingcups, watercress and blue brooklime. The cart track crossed by a brick culvert and climbed the opposite slope to a five-barred gate in the thorn hedge. The gate led into the lane.

The May sunset was red in clouds, and there was still half an hour to twilight. The dry slope was dotted with rabbits — some nibbling at the thin grass near their holes, others pushing further down to look for dandelions or perhaps a cowslip that the rest had missed. Here and there one sat upright on an ant heap and looked about, with ears erect and nose in the wind. But a blackbird, singing undisturbed on the outskirts of the wood, showed that there was nothing alarming there, and in the other direction, along the brook, all was plain to be seen, empty and quiet. The warren was at peace.

At the top of the bank, close to the wild cherry where the blackbird sang, was a little group of holes almost hidden by brambles. In the green half-light, at the mouth of one of these holes, two rabbits were sitting together side by side. At length, the larger of the two came out, slipped along the bank under cover of the brambles and so down into the ditch and up into the field. A few moments later the other followed.

The first rabbit stopped in a sunny patch and scratched his ear with rapid movements of his hind leg. Although he was a yearling and still below fall weight, he had not the harassed look of most "outskirters"' — that is, the rank and file of ordinary rabbits in their first year who, lacking either aristocratic parentage or unusual size and strength, get sat on by their elders and live as best they can — often in the open — on the edge of their warren. He looked as though he knew how to take care of himself. There was a shrewd, buoyant air about him as he sat up, looked around and rubbed both front paws over his nose. As soon as he was satisfied that all was well, he laid back his ears and set to work on the grass.

His companion seemed less at ease. He was small, with wide, staring eyes and a way of raising and turning his head which suggested not so much caution as a kind of ceaseless, nervous tension. His nose moved continually, and when a bumblebee flew humming to a thistle bloom behind him, he jumped and spun round with a start that sent two nearby rabbits scurrying for holes before the nearest, a buck with black-tipped ears, recognized him and returned to feeding.

"Oh, it's only Fiver," said the black-tipped rabbit, "jumping at bluebottles again. Come on, Buckthorn, what were you telling me?"

"Fiver?" said the other rabbit. "Why's he called that?"

"Five in the litter, you know: he was the last — and the smallest. You'd wonder nothing had got him by now. I always say a man couldn't see him and a fox wouldn't want him. Still, I admit he seems to be able to keep out of harm's way."

The small rabbit came closer to his companion, lolloping on long hind legs.

"Let's go a bit further, Hazel," he said. "You know, there's something queer about the warren this evening, although I can't tell exactly what it is. Shall we go down to the brook?"

"All right," answered Hazel, "and you can find me a cowslip. If you can't find one, no one can."

He led the way down the slope, his shadow stretching behind him on the grass. They reached the brook and began nibbling and searching close beside the wheel ruts of the track.

It was not long before Fiver found what they were looking for. Cowslips are a delicacy among rabbits, and as a rule there are very few left by late May in the neighborhood of even a small warren. This one had not bloomed and its flat spread of leaves was almost hidden under the long grass. They were just sitting on it when two larger rabbits came running across from the other side of the nearby cattle wade.

"And we'll eat it," replied Toadflax. "Cowslips are for Owsla — don't you know that? If you don't, we can easily teach you."

Fiver had already turned away. Hazel caught him up by the culvert.

"Well, you can at least expect to be in the Owsla one day," answered Fiver. "You've got some weight coming and that's more than I shall ever have."