The Thing Around Your Neck

The Thing Around Your Neck

Title
The Thing Around Your Neck
Author
Chimamanda Ngozi Adichie

Twelve stories from the prizewinning Nigerian author of Half a Yellow Sun include the tale of a medical student in hiding with a poor Muslim woman, and a woman who discovers a devastating secret about her brother's death.

NPR stories about The Thing Around Your Neck

June 21, 2009 • No, she's not Jamaican and she doesn't care if you like elephants. Novelist Chimamanda Ngozi Adichie offers up condensed tales of immigrant life in America. The Nigerian writer pulls back the layers of how we perceive "the other."

Excerpt: The Thing Around Your Neck 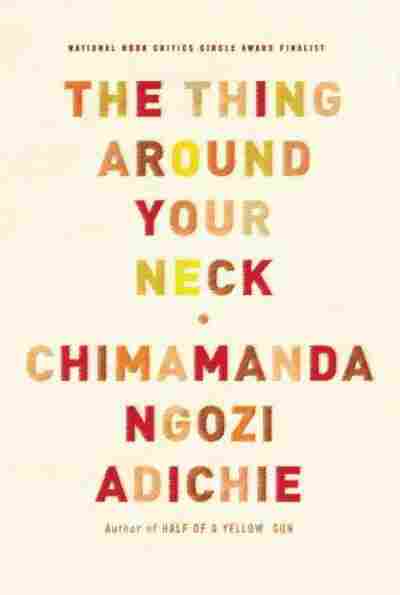 The first time our house was robbed, it was our neighbor Osita who climbed in through the dining room window and stole our TV, our VCR, and the Purple Rain and Thriller videotapes my father had brought back from America. The second time our house was robbed, it was my brother Nnamabia who faked a break-in and stole my mother’s jewelry. It happened on a Sunday. My parents had traveled to our hometown, Mbaise, to visit our grandparents, so Nnamabia and I went to church alone. He drove my mother’s green Peugeot 504. We sat together in church as we usually did, but we did not nudge each other and stifle giggles about somebody’s ugly hat or threadbare caftan, because Nnamabia left without a word after about ten minutes. He came back just before the priest said, “The Mass is ended. Go in peace.” I was a little piqued. I imagined he had gone off to smoke and to see some girl, since he had the car to himself for once, but he could at least have told me where he was going. We drove home in silence and, when he parked in our long driveway, I stopped to pluck some ixora flowers while Nnamabia unlocked the front door. I went inside to find him standing still in the middle of the parlor.

“We’ve been robbed!” he said in English.

It took me a moment to understand, to take in the scattered room. Even then, I felt that there was a theatrical quality to the way the drawers were flung open, as if it had been done by somebody who wanted to make an impression on the discoverers. Or perhaps it was simply that I knew my brother so well. Later, when my parents came home and neighbors began to troop in to say ndo, and to snap their fingers and heave their shoulders up and down, I sat alone in my room upstairs and realized what the queasiness in my gut was: Nnamabia had done it, I knew. My father knew, too. He pointed out that the window louvers had been slipped out from the inside, rather than outside (Nnamabia was really much smarter than that; perhaps he had been in a hurry to get back to church before Mass ended), and that the robber knew exactly where my mother’s jewelry was—the left corner of her metal trunk. Nnamabia stared at my father with dramatic, wounded eyes and said, “I know I have caused you both terrible pain in the past, but I would never violate your trust like this.” He spoke English, using unnecessary words like “terrible pain” and “violate,” as he always did when he was defending himself. Then he walked out through the back door and did not come home that night. Or the next night. Or the night after. He came home two weeks later, gaunt, smelling of beer, crying, saying he was sorry and he had pawned the jewelry to the Hausa traders in Enugu and all the money was gone.

“How much did they give you for my gold?” my mother asked him. And when he told her, she placed both hands on her head and cried, “Oh! Oh! Chi m egbuo m! My God has killed me!” It was as if she felt that the least he could have done was get a good price. I wanted to slap her. My father asked Nnamabia to write a report: how he had sold the jewelry, what he had spent the money on, with whom he had spent it. I didn’t think Nnamabia would tell the truth, and I don’t think my father thought he would, either, but he liked reports, my professor father, he liked things written down and nicely documented. Besides, Nnamabia was seventeen, with a carefully tended beard. He was in that space between secondary school and university and was too old for caning. What else could my father have done? After Nnamabia wrote the report, my father filed it in the steel drawer in his study where he kept our school papers.

“That he could hurt his mother like this” was the last thing my father said, in a mutter.

But Nnamabia really hadn’t set out to hurt her. He did it because my mother’s jewelry was the only thing of any value in the house: a lifetime’s collection of solid gold pieces. He did it, too, because other sons of professors were doing it. This was the season of thefts on our serene Nsukka campus. Boys who had grown up watching Sesame Street, reading Enid Blyton, eating cornflakes for breakfast, attending the university staff primary school in smartly polished brown sandals, were now cutting through the mosquito netting of their neighbors’ windows, sliding out glass louvers, and climbing in to steal TVs and VCRs. We knew the thieves. Nsukka campus was such a small place—the houses sitting side by side on tree-lined streets, separated only by low hedges—that we could not but know who was stealing. Still, when their professor parents saw one another at the staff club or at church or at a faculty meeting, they continued to moan about riffraff from town coming onto their sacred campus to steal.

The thieving boys were the popular ones. They drove their parents’ cars in the evening, their seats pushed back and their arms stretched out to reach the steering wheel. Osita, the neighbor who had stolen our TV only weeks before the Nnamabia incident, was lithe and handsome in a brooding sort of way and walked with the grace of a cat. His shirts were always sharply ironed; I used to look across the hedge and see him and close my eyes and imagine that he was walking toward me, coming to claim me as his. He never noticed me. When he stole from us, my parents did not go over to Professor Ebube’s house to ask him to ask his son to bring back our things. They said publicly that it was riffraff from town. But they knew it was Osita. Osita was two years older than Nnamabia; most of the thieving boys were a little older than Nnamabia, and perhaps that was why Nnamabia did not steal from another person’s house. Perhaps he did not feel old enough, qualified enough, for anything bigger than my mother’s jewelry.

Nnamabia looked just like my mother, with that honey-fair complexion, large eyes, and a generous mouth that curved perfectly. When my mother took us to the market, traders would call out, “Hey! Madam, why did you waste your fair skin on a boy and leave the girl so dark? What is a boy doing with all this beauty?” And my mother would chuckle, as though she took a mischievous and joyful responsibility for Nnamabia’s good looks. When, at eleven, Nnamabia broke the window of his classroom with a stone, my mother gave him the money to replace it and did not tell my father. When he lost some library books in class two, she told his form-mistress that our houseboy had stolen them. When, in class three, he left early every day to attend catechism and it turned out he never once went and so could not receive Holy Communion, she told the other parents that he had malaria on the examination day. When he took the key of my father’s car and pressed it into a piece of soap that my father found before Nnamabia could take it to a locksmith, she made vague sounds about how he was just experimenting and it ?didn’t mean a thing. When he stole the exam questions from the study and sold them to my father’s students, she shouted at him but then told my father that Nnamabia was sixteen, after all, and really should be given more pocket money.

I don’t know whether Nnamabia felt remorse for stealing her jewelry. I could not always tell from my brother’s gracious, smiling face what it was he really felt. And we did not talk about it. Even though my mother’s sisters sent her their gold earrings, even though she bought an earring-and-pendant set from Mrs. Mozie, the glamorous woman who imported gold from Italy, and began to drive to Mrs. Mozie’s house once a month to pay for it in installments, we never talked, after that day, about Nnamabia’s stealing her jewelry. It was as if pretending that Nnamabia had not done the things he had done would give him the opportunity to start afresh. The robbery might never have been mentioned again if Nnamabia had not been arrested three years later, in his third year in the university, and locked up at the police station.

It was the season of cults on our serene Nsukka campus. It was the time when signboards all over the university read, in bold letters, SAY NO TO CULTS. The Black Axe, the Buccaneers, and the Pirates were the best known. They may once have been benign fraternities, but they had evolved and were now called “cults”; eighteen-year-olds who had mastered the swagger of American rap videos were undergoing secret and strange initiations that sometimes left one or two of them dead on Odim Hill. Guns and tortured loyalties and axes had become common. Cult wars had become common: a boy would leer at a girl who turned out to be the girlfriend of the Capone of the Black Axe, and that boy, as he walked to a kiosk to buy a cigarette later, would be stabbed in the thigh, and he would turn out to be a member of the Buccaneers, and so his fellow Buccaneers would go to a beer parlor and shoot the nearest Black Axe boy in the shoulder, and then the next day a Buccaneer member would be shot dead in the refectory, his body falling against aluminum bowls of soup, and that evening a Black Axe boy would be hacked to death in his room in a lecturer’s Boys’ Quarters, his CD player splattered with blood. It was senseless. It was so abnormal that it quickly became normal. Girls stayed inside their hostel rooms after lectures and lecturers quivered and when a fly buzzed too loudly; people were afraid. So the police were called in. They sped across campus in their rickety blue Peugeot 505, rusty guns poking out of the car windows, and glowered at the students. Nnamabia came home from his lectures laughing. He thought the police would have to do better; everyone knew the cult boys had more modern guns.