Dreaming Bigger Than the Town You're from

The star of "My Name is Earl" traces her progression from a small Southern hometown girl to Hollywood celebrity, describing how her perspectives have been shaped by her colorful family, regional prejudice, and parenthood.

NPR stories about It's Not Necessarily Not the Truth

March 18, 2009 • In It's Not Necessarily Not The Truth, the Emmy winner tells the story of her journey from a small town in the South to Hollywood. The My Name Is Earl co-star is also a clothing designer and a hilarious writer.

Excerpt: It's Not Necessarily Not The Truth 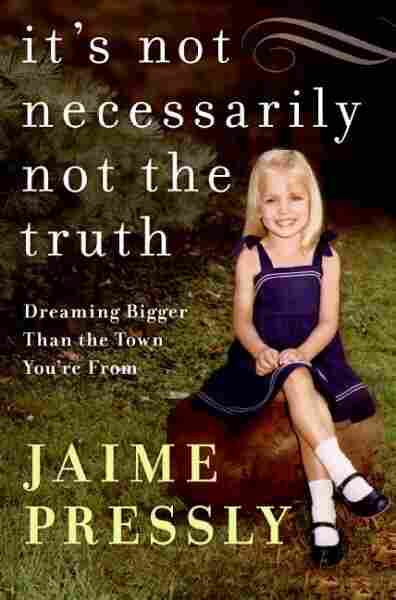 Dreaming Bigger Than the Town You're From

In the beginning was the word.

Where I'm from, the knowledge and acceptance of that basic fact is a given. So much so I think it could be considered an unofficial slogan for the South. Not only because of religion and the role it plays in places like North Carolina, where I was born and raised-that would be way too obvious and literal, especially for a group of folk who subsist on subtext. In the South, when people talk about the power of the word, they could be making reference to God and any of the gospels in the Bible. But then again, they could be alluding to folklore, pure and simple, or any other type of tale with a sage message hidden deep inside of it. After all, we're a people who believe in the sort of salvation that comes from a well-told story. And it doesn't matter who's doing the telling-could be a deacon or the Devil himself-just as long as he does it right.

Storytelling is as common a pastime in the South as eating a plate of collard greens or fried green tomatoes. That's probably because people from the South lead such complicated lives, and talking is another form of untangling, figuring out how, where, and why things fit together. Or maybe it's because we just like living out loud, taking our everyday experiences and turning them into a song, or a prayer, or an anecdote to be shared during supper. I can't really speak to the reasons why, but what I do know for sure is that already, throughout history, we've sung new musical genres into creation and written volumes of prose based on nothing more than all the actions and interactions that take place underneath the gentle, unassuming façade of our run-of-the-mill, small-town lives.

It makes sense then that what I remember most about my youth is the stories I was told, stories about the people around me-friends, family members, and the array of neighbors I'd known since the day I was born. They were a proverbial motley crew, these people, a cast of the most comical, quietly controversial, and unadulterated characters anyone could ever imagine. I learned to lose myself in their stories, absorbing the complexities of their choices and the intricacies of their secrets. I would sit, drop-jawed, taking it all in until I became far too intimate with their sorrows and regrets and overly invested in their quests for happiness.

Some people look back and measure their growth in years or with events. When they tell you about their first kiss or the first time somebody asked them to dance, they might recall that it was on a balmy November night in 1984, or that it was during the school dance which took place the first Friday after Ronald Reagan won the presidential election. More often than not, I tend to measure my growth with stories, with all the words that swirled around each significant achievement, each new awareness, as it was happening.

I remember, for instance, when and where I first gained a sense of myself as an individual, a person with wants and needs that were specifically her own. It was after I'd heard about my grandmother's penchant for bargain-hunting, especially twofers-except, in her case, "fourfers" would be the more appropriate word-four for the price of one. With four young boys and one girl at her feet, my Grandmamma Pressly, as the story was told, was a firm believer in the "one fell swoop" philosophy. She kept all of her boys in buzz cuts, because it was easier, and when one of them needed a trim, she'd gather the whole bunch and march them right down to the barbershop, even if their hair hadn't grown an inch since their last cut.

The same applied to appointments with doctors and dentists, as well as trips to the department store. When one of her boys needed to have his wisdom teeth removed, she piled the rest of them into the car too, figuring that even though they weren't having problems now, they'd eventually have to have a tooth pulled, wisdom or other, so now was as good a time as any, since she'd more than likely get a discount for bringing in that many patients.

I'll never forget how grateful I was, after hearing that story, to be the only girl and also to have a brother who was nine and a half years older than me. I'd always been somebody with a strong personality and an unflinching knowledge of her likes and dislikes as well as her needs and wants. But I'd never before appreciated that having them met was a privilege, not until I considered the existence of an alternative. I couldn't even begin to imagine being made to wear the same haircut or style as somebody else just because we were siblings, or having to go to the doctor and get poked and prodded just because somebody else was sick.

It might seem like a negligible piece of enlightenment, but when you're six or seven, as I was, it's actually a major revelation. It's like having a thin layer of film lifted off your world, a film you never even knew was there, which allows you to see things a little bit clearer. That's the effect each and every one of those stories my family members told me had; they altered my impressions of places, of people and things. They gave me insight.

As of right now, I've spent exactly as many years living away from my hometown as I did living in it. No matter how far away I've moved from my past, in miles or in memory, I've always carried those stories with me. Even though I return every year to visit, I've never, as the saying goes, been able to go home again. So much has changed. Some people have died. Others, like me, have moved far away. And those who have chosen to remain have been in constant motion-gaining weight or losing hair, giving birth or getting divorced. Nothing has stood still in time, except, of course, those stories, all those words and the voices that spoke them.