Accessibility links
Funny in Farsi NPR coverage of Funny in Farsi: A Memoir of Growing Up Iranian in America by Firoozeh Dumas. News, author interviews, critics' picks and more.

An autobiography of growing up as an Iranian-American describes the author's family's 1971 move from Iran to Southern California, the members of her diverse family, and their struggle with culture shock.

NPR stories about Funny in Farsi

April 28, 2009 • In America, we take freedom of speech for granted. From bumper stickers to Jon Stewart, we often fail to acknowledge just how much our First Amendment rights afford us. But as an Iranian-American, commentator Firoozeh Dumas appreciates all of it — even Rush Limbaugh.

December 21, 2008 • Forget the picturesque tree and perfectly arranged presents. Christmas means blending old customs with new traditions, even if the result is messier than a bag full of carrot jam. 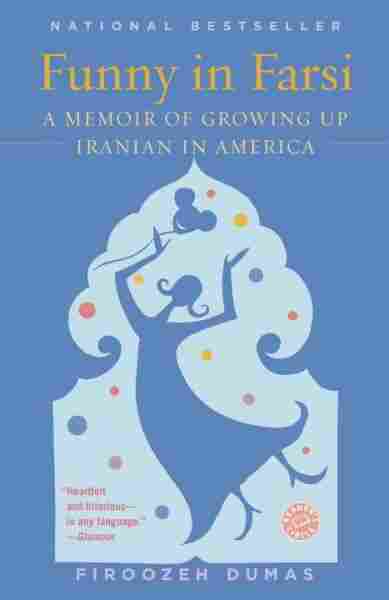 When I was seven, my parents, my fourteen-year-old brother, Farshid, and I moved from Abadan, Iran, to Whittier, California. Farid, the older of my two brothers, had been sent to Philadelphia the year before to attend high school. Like most Iranian youths, he had always dreamed of attending college abroad and, despite my mother's tears, had left us to live with my uncle and his American wife. I, too, had been sad at Farid's departure, but my sorrow soon faded-not coincidentally, with the receipt of a package from him. Suddenly, having my brother on a different continent seemed like a small price to pay for owning a Barbie complete with a carrying case and four outfits, including the rain gear and mini umbrella.

Our move to Whittier was temporary. My father, Kazem, an engineer with the National Iranian Oil Company, had been assigned to consult for an American firm for about two years. Having spent several years in Texas and California as a graduate student, my father often spoke about America with the eloquence and wonder normally reserved for a first love. To him, America was a place where anyone, no matter how humble his background, could become an important person. It was a kind and orderly nation full of clean bathrooms, a land where traffic laws were obeyed and where whales jumped through hoops. It was the Promised Land. For me, it was where I could buy more outfits for Barbie.

We arrived in Whittier shortly after the start of second grade; my father enrolled me in Leffingwell Elementary School. To facilitate my adjustment, the principal arranged for us to meet my new teacher, Mrs. Sandberg, a few days before I started school. Since my mother and I did not speak English, the meeting consisted of a dialogue between my father and Mrs. Sandberg. My father carefully explained that I had attended a prestigious kindergarten where all the children were taught English. Eager to impress Mrs. Sandberg, he asked me to demonstrate my knowledge of the English language. I stood up straight and proudly recited all that I knew: "White, yellow, orange, red, purple, blue, green."

The following Monday, my father drove my mother and me to school. He had decided that it would be a good idea for my mother to attend school with me for a few weeks. I could not understand why two people not speaking English would be better than one, but I was seven, and my opinion didn't matter much.

Until my first day at Leffingwell Elementary School, I had never thought of my mother as an embarrassment, but the sight of all the kids in the school staring at us before the bell rang was enough to make me pretend I didn't know her. The bell finally rang and Mrs. Sandberg came and escorted us to class. Fortunately, she had figured out that we were precisely the kind of people who would need help finding the right classroom.

My mother and I sat in the back while all the children took their assigned seats. Everyone continued to stare at us. Mrs. Sandberg wrote my name on the board: F-I-R-O-O-Z-E-H. Under my name, she wrote "I-R-A-N." She then pulled down a map of the world and said something to my mom. My mom looked at me and asked me what she had said. I told her that the teacher probably wanted her to find Iran on the map.

The problem was that my mother, like most women of her generation, had been only briefly educated. In her era, a girl's sole purpose in life was to find a husband. Having an education ranked far below more desirable attributes such as the ability to serve tea or prepare baklava. Before her marriage, my mother, Nazireh, had dreamed of becoming a midwife. Her father, a fairly progressive man, had even refused the two earlier suitors who had come for her so that his daughter could pursue her dream. My mother planned to obtain her diploma, then go to Tabriz to learn midwifery from a teacher whom my grandfather knew. Sadly, the teacher died unexpectedly, and my mother's dreams had to be buried as well.

Bachelor No. 3 was my father. Like the other suitors, he had never spoken to my mother, but one of his cousins knew someone who knew my mother's sister, so that was enough. More important, my mother fit my father's physical requirements for a wife. Like most Iranians, my father preferred a fair-skinned woman with straight, light-colored hair. Having spent a year in America as a Fulbright scholar, he had returned with a photo of a woman he found attractive and asked his older sister, Sedigeh, to find someone who resembled her. Sedigeh had asked around, and that is how at age seventeen my mother officially gave up her dreams, married my father, and had a child by the end of the year.

As the students continued staring at us, Mrs. Sandberg gestured to my mother to come up to the board. My mother reluctantly obeyed. I cringed. Mrs. Sandberg, using a combination of hand gestures, started pointing to the map and saying, "Iran? Iran? Iran?" Clearly, Mrs. Sandberg had planned on incorporating us into the day's lesson. I only wished she had told us that earlier so we could have stayed home.

After a few awkward attempts by my mother to find Iran on the map, Mrs. Sandberg finally understood that it wasn't my mother's lack of English that was causing a problem, but rather her lack of world geography. Smiling graciously, she pointed my mother back to her seat. Mrs. Sandberg then showed everyone, including my mother and me, where Iran was on the map. My mother nodded her head, acting as if she had known the location all along, but had preferred to keep it a secret. Now all the students stared at us, not just because I had come to school with my mother, not because we couldn't speak their language, but because we were stupid. I was especially mad at my mother, because she had negated the positive impression I had made previously by reciting the color wheel. I decided that starting the next day, she would have to stay home.

The bell finally rang and it was time for us to leave. Leffingwell Elementary was just a few blocks from our house and my father, grossly underestimating our ability to get lost, had assumed that my mother and I would be able to find our way home. She and I wandered aimlessly, perhaps hoping for a shooting star or a talking animal to help guide us back. None of the streets or houses looked familiar. As we stood pondering our predicament, an enthusiastic young girl came leaping out of her house and said something. Unable to understand her, we did what we had done all day: we smiled. The girl's mother joined us, then gestured for us to follow her inside. I assumed that the girl, who appeared to be the same age as I, was a student at Leffingwell Elementary; having us inside her house was probably akin to having the circus make a personal visit.

Her mother handed us a telephone, and my mother, who had, thankfully, memorized my father's work number, called him and explained our situation. My father then spoke to the American woman and gave her our address. This kind stranger agreed to take us back to our house.

Perhaps fearing that we might show up at their doorstep again, the woman and her daughter walked us all the way to our front porch and even helped my mother unlock the unfamiliar door. After making one last futile attempt at communication, they waved good-bye. Unable to thank them in words, we smiled even more broadly.

After spending an entire day in America, surrounded by Americans, I realized that my father's description of America had been correct. The bathrooms were clean and the people were very, very kind.

Moving to America was both exciting and frightening, but we found great comfort in knowing that my father spoke English. Having spent years regaling us with stories about his graduate years in America, he had left us with the distinct impression that America was his second home. My mother and I planned to stick close to him, letting him guide us through the exotic American landscape that he knew so well. We counted on him not only to translate the language but also to translate the culture, to be a link to this most foreign of lands. He was to be our own private Rosetta stone.

Once we reached America, we wondered whether perhaps my father had confused his life in America with someone else's. Judging from the bewildered looks of store cashiers, gas station attendants, and waiters, my father spoke a version of English not yet shared with the rest of America. His attempts to find a "vater closet" in a department store would usually lead us to the drinking fountain or the home furnishings section. Asking my father to ask the waitress the definition of "sloppy Joe" or "Tater Tots" was no problem. His translations, however, were highly suspect. Waitresses would spend several minutes responding to my father's questions, and these responses, in turn, would be translated as "She doesn't know." Thanks to my father's translations, we stayed away from hot dogs, catfish, and hush puppies, and no amount of caviar in the sea would have convinced us to try mud pie.

We wondered how my father had managed to spend several years attending school in America, yet remain so utterly befuddled by Americans. We soon discovered that his college years had been spent mainly in the library, where he had managed to avoid contact with all Americans except his engineering professors. As long as the conversation was limited to vectors, surface tension, and fluid mechanics, my father was Fred Astaire with words. But one step outside the scintillating world of petroleum engineering and he had two left tongues.

My father's only other regular contact in college had been his roommate, a Pakistani who spent his days preparing curry. Since neither spoke English, but both liked curries, they got along splendidly. The person who had assigned them together had probably hoped they would either learn English or invent a common language for the occasion. Neither happened.