The Soviet War in Afghanistan

Examines the Soviet invasion of Afghanistan from the perspective of ground soldiers to offer insight into how the war was presented as a victory but experienced as a demoralizing defeat that had a substantial impact on the Soviet Union and its collapse.

NPR stories about The Great Gamble

January 8, 2009 • The common view of the Soviet war in Afghanistan was that it was a Soviet territorial grab. But the truth was much more confused, says Gregory Feifer, NPR's Moscow correspondent. He is the author of The Great Gamble, a new history of that conflict. 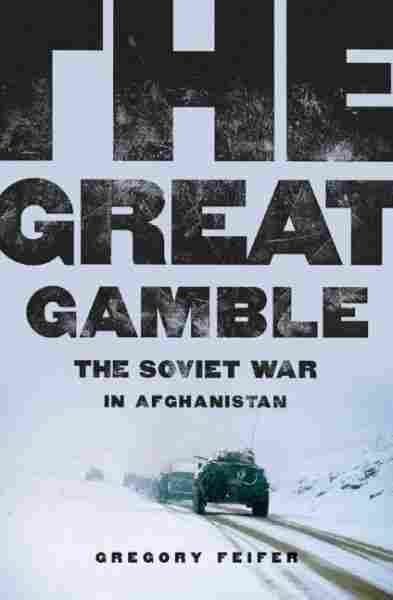 The Soviet War in Afghanistan

Dusk had already fallen in the late afternoon of December 12, 1979, when select members of the Soviet Union's top leadership gathered in a Kremlin conference room. They were there for a brief discussion of an issue that had given them much trouble during the better part of the outgoing year: political crisis in the USSR's southern neighbor Afghanistan. The informal assemblage of mostly white-haired gerontocrats wasn't an official meeting of the state's top governing body, the Politburo of the Communist Party's Central Committee. They formed a much smaller group of oligarchs who held the state's real political power, making decisions secretly among themselves. The elders ran the Soviet Union collegially, arriving at resolutions by the consensus that enabled them to share responsibility and absolve individual blame. What exactly happened during their secret midwinter meeting remains the subject of debate.

General Secretary Leonid Brezhnev presided. He had less than two years to live. Television appearances of the ailing leader had made him a public laughingstock. Propped between the shoulders of fellow Politburo members, the bloated, bushy-browed bear of a man made supreme efforts to mumble through euphemistic texts written by his advisers. (Slurring the frequently used bureaucratic word "systematically" was among his most mocked gaffes. It emerged from his lips sounding much like a juvenile term for women's breasts.) During important Politburo meetings, the master of tedium went through the motions of approving decisions already made by members of his immediate entourage, who even wrote his responses for him. One reason for his longevity in office was that the rest of the Soviet leadership-some of whose members were far from incompetent-worried that the West would interpret any changes in its makeup as a sign of the Party's instability.

Brezhnev had come to power in October 1964, promising to do away with Nikita Khrushchev's anti-Stalinist campaigns and boat-rocking reforms. Supported by vast cadres of Party functionaries, the new general secretary put an end to embarrassing and potentially ruinous questions about past activities. He provided stability for the Communist nomenklatura-the politically dependable men who occupied senior positions in the bureaucracy and lived much better than others on the patronage. Dissidents were once again put on public trial. After the Czechoslovakian reform movement known as "socialism with a human face" was crushed along with the Prague Spring in 1968, Brezhnev's tenure developed into what became known as zastoi-the stagnation. The economy, beset by massive inefficiencies from central planning and institutions such as Stalin's agricultural collectivization, declined more or less consistently, and was further dragged down by a ballooning military-industrial complex overseen by Defense Minister Dmitri Ustinov. Prevented from making significant improvements by the nature of his rule and no doubt his own nature too, Brezhnev presided over a system that managed to hobble ahead only because the fruit of corruption spread from the Party elite to the rest of society. The economy's raw materials and articles of production were largely-maybe even chiefly-distributed by thievery, bribery, and black marketeering.

Chief Party ideologue Mikhail Suslov, KGB Chairman Yuri Andropov, Foreign Minister Andrei Gromyko, and Defense Minister Ustinov also attended the December 12 meeting. Some claim-although people close to the Soviet leadership deny-that Prime Minister Alexei Kosygin was there as well. If he wasn't, it may have been because Kosygin, as is widely believed, opposed the idea of invading Afghanistan-or because he was ill.

Although the imposing, six-foot-tall Suslov was generally regarded as Brezhnev's likely successor, most Politburo decisions were made by a triumvirate composed of Andropov, Gromyko, and Ustinov. They simplified and prettified the issues in their reports to Brezhnev. Using good old ideological terms such as "the interests of the proletariat" and "the spread of the world socialist revolution," they also usually told the Soviet leader what they believed he wanted to hear. Possibly in the hope of succeeding him, Ustinov was particularly sycophantic, singing Brezhnev's praises in official pronouncements and refusing to say anything that would prompt his ire.

The defense minister had no monopoly on kowtowing or backslapping, however. Frequent awards ceremonies were venues for fierce jockeying to secure places closest to the general secretary so that the following day's newspaper photographs would display the "winners." When Brezhnev pinned on Kosygin the latest of the prime minister's countless medals-that one for the Order of the October Revolution-he commented that the award looked pretty, then turned to fellow Politburo member Konstantin Chernenko. "Kostya," the general secretary said, "I don't have one of those." Several days later-probably the time it took for the Politburo to find an excuse to make the award-a place was found on Brezhnev's bulging chestful of decorations for a new Order of the October Revolution.

Shortly before the December Kremlin meeting, Andropov had sent Brezhnev a personal memorandum that had heavily influenced the debate over how Moscow should respond to a series of worrying developments in Afghanistan. A new communist government in Kabul was asking Moscow to send Red Army troops to quell increasing social unrest. The Soviet leadership had been turning down the requests for almost a year. Public opposition had especially spiked after Afghanistan's president, Nur Mohammed Taraki, was ousted by his deputy, Prime Minister Hafizullah Amin, in September, a situation KGB chairman Andropov now characterized as "an undesirable turn for us." Andropov criticized Amin's mass repressions and the "alarming information" that Amin was conducting secret activities that might lead to a "possible political shift to the West."

Andropov too is believed to have earlier opposed the idea of invading Afghanistan, but Vladimir Kryuchkov, his hawkish and secretive deputy, prevailed upon him to change his mind. In his memorandum, Andropov went on to say that Afghans living outside the country were supporting Amin's rival Babrak Karmal-whom Taraki had exiled to Prague as Afghanistan's ambassador to Czechoslovakia-and they were developing a plan to oust the new leader. Andropov suggested moving Soviet military units close to the Afghanistan border to provide "assistance" for such an event. The Soviet ambassador to the United States, Anatoly Dobrynin-from whose notes Andropov's text survives-believed the memorandum was central to convincing Brezhnev of the need to invade Afghanistan.