How Biology and Culture Shape the Way We Parent

Title
Our Babies, Ourselves
Subtitle
How Biology and Culture Shape the Way We Parent
Author
Meredith F. Small

Contrasts Western child-rearing practices to those of other cultures, discussing the advantages of non-traditional feeding, sleeping, and adult interaction customs.

NPR stories about Our Babies, Ourselves

December 16, 2008 • Just in time for the holidays, regular contributor Jolene Ivey and guest mom Dia Michels talk about their picks for parenting books that should make the holiday gift list.

Excerpt: Our Babies, Ourselves 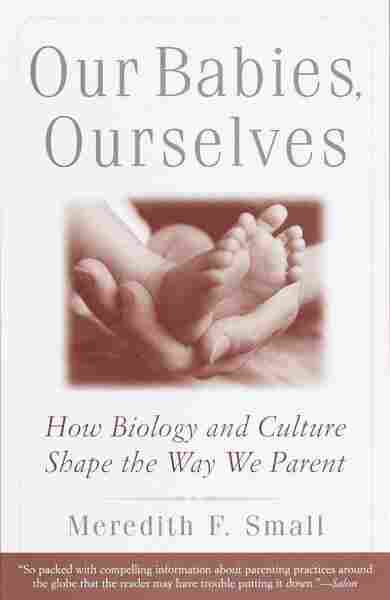 Several years ago, The American Museum of Natural History in New York City sponsored a special exhibit of human ancestors. Their goal was to bring to the public a four-million-year record of original human fossils. These fossils are usually locked in museum vaults in Africa, Asia, and Europe, privy only to the eyes of qualified scientists. But that spring, the average person was going to have an opportunity to see their ancestors, not in the flesh but in the bone. For me, an anthropologist, this was a dream come true to see the actual fossils that I had spent so many years studying and teaching about. I drove to New York the first weekend it opened, excited as a teenager on a first date. I had seen photographs of all of these fossils and played with plaster casts of many. And now I was going to see what Louis Leakey, Don Johanson, and others had seen when they reached down and scooped one of our ancient ancestors out of the dirt.

I walked up the main steps of the museum, passed under the banner announcing the exhibit, and entered. It was dark, and quiet, with only a few people milling about. The ambiance suited me--it echoed my own sense of anticipated reverence. Before me, the first exhibit was a tall glass case lit from above. Inside was a child's face, set high at adult eye level so that our gazes met. There was no flesh on this skull, no eyes, no mouth, just the empty face of a child with a set of battered teeth. I froze, sucked in my breath, and stared.

This was the "Taung Baby," a two-million-year-old Australopithecus africanus, discovered in 1925 and once thought to be the missing link between humans and apes. Long ago, when this little kid died, he or she somehow ended up in a limestone quarry where the bone tissue leaked away and was replaced by stone. Two million years later, quarry workers chucked this hunk of rock into a box of possible fossils that they routinely passed on to Raymond Dart, a British anatomist working at a South African university. Dart used his wife's knitting needles to pick away at the stone until the small face appeared. Dart was used to finding baboon fossils in his shipment, but this was no monkey, the brain was too big and the face was too flat. It was, Dart was convinced, the first evidence of the ape-human split. We know now that Taung and its relatives were a kind of human that walked upright but still had small brains, and that they were possible ancestors of our species, Homo sapiens.  A child, then, led the way to understanding our past.

And here was that same face that Raymond Dart had looked at sixty years before.The face is gray stone, dished in from forehead to mouth, but with a flat nose. The eyes, were they in their sockets, would stare straight ahead. The right side of the inner skull is filled with a geode, sparkling crystals that give Taung a jewel-like glow. And that is appropriate. This skull, and the stone impression of this child's brain that Dart also found, are as precious as diamonds to those who are trying to figure out the human path of evolution. Staring at that skull, I was struck by the fact that this ancient child was somebody's baby long ago. Perhaps she was sick, or maybe he was accident-prone, or perhaps this baby was some predator's dinner. Standing there, I could picture him or her long ago, smiling, laughing, and reaching out to grab a mother's breast. It was the most beautiful thing I had ever seen.

From a biological point of view, the Taung child represents a specific stage of development for Australopithecines, our ancestors that lived from four to two million years ago. Paleontologists tend to concentrate on adults of any species because adulthood is the mature end product; but fossilized babies and children also give clues to anatomy and physiology, to rates of development and growth. Children are not just miniature versions of adults. There are sound evolutionary reasons why infants and children look and behave the way they do; childhood is a specifically evolved stage in the life course. The Taung child emphasizes the fact that we are not born as adults but go through a lengthy period of growth and change. In this child, and all children, are some of the most important secrets of our anatomy and behavior. There are reasons why mice are born blind and human babies cannot hold their heads up. Natural selection has opted for fawns to stand on their own soon after birth, for human infants to smile automatically, and for baby chimpanzees to cling to their mothers' fur. And all of this makes some sort of natural biological sense. The pattern of birth, infancy, and childhood in any species follows a particular course that eventually outlines adult biology and behavior.

In the summer of 1990, on a trip to Africa, I had the opportunity to hold a wild baby chimpanzee. Its mother, and all its relatives, had been killed by a poacher. The poacher was caught before the infant was shipped off to some European zoo, and for now he was housed at a hotel where the sympathetic manager had made it a policy to take in abandoned animals. Cradling the infant ape in my arms was uncanny: she felt just like a small child, only hairier. She squirmed a bit, looked at me with frightened brown eyes, and cooed softly, lips pouting out. After a few anxious minutes, she stretched her long arms over my shoulder toward the woman who usually cared for her, reaching for the only mother she now had.

That chimpanzee felt so much like a human child for a good reason--about 98 percent of our genetic material is identical to that of chimpanzees. We are, in fact, more closely related to chimpanzees than chimpanzees are to gorillas. I state this fact to underscore a point: Human babies, and human adults for that matter, are animals. We are primates, a kind of mammal, and our babies are animal babies. Although humans like to think of themselves as unique, we share much of our physiology and behavior with others of our kind, with other primates. For example, the shape of our head follows a continuum with other primates that shows a reduced snout and an enlarged brain
case with a full forehead and forward-facing eyes. Our teeth are primate teeth, rather than dog teeth or alligator teeth. Our eyes see the way monkeys' eyes see, with color vision and good depth perception to facilitate swinging through the trees. And our flexible hands--the hands that can pick ripe fruit off a tree, type these words or tie a shoe, hold a flower or build a model plane--distinguish us, and all primates, from other mammals that have paws. Our whole upper skeleton reflects an even closer relationship to other primates, apes in particular. Using a human anatomy book, one can dissect a chimpanzee or a gorilla and find everything in the right place. We have the upper bodies of long-armed apes. The only difference, in a broad anatomical sense, is the fact that the human pelvis, legs, and feet have been adapted to upright walking. So much of our physiology is simply that of an upright-walking primate. The point is that human babies, like all babies, are animals of a certain species, born with certain physical and mental abilities and lacking some others. As this book will show, much of the animal context of human babies and children can be understood best through the lens of biological evolution. Taking this tack, one cannot think about babies as early unformed organisms or shadows of the adults they are to become. They are instead simply what they have been designed to be.