Told from the perspective of a 1988 world champion, a behind-the-scenes account of the personal toll of Olympics competitiveness reveals how her stage parents, abusive coaches, and manipulative sponsors pushed her to the limits of her physical and mental health.

NPR stories about Chalked Up

Elite Gymnastics Not All It's 'Chalked Up' to Be

May 1, 2008 • In her new memoir, Chalked Up, Jennifer Sey, the 1986 National Gymnastics Champion, exposes the merciless coaching and aggressive parenting that can push young athletes far beyond their physical and emotional limits. 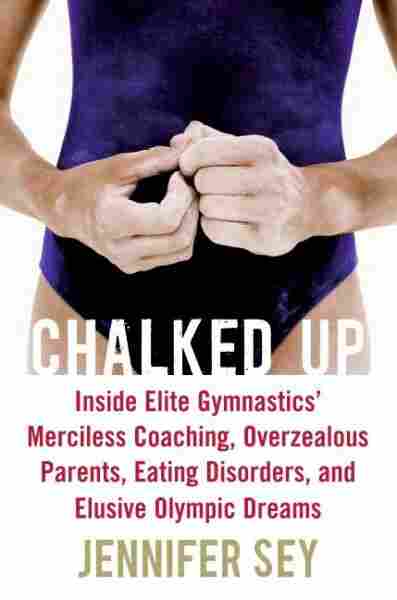 I learned to turn a cartwheel when I was three years old. We lived in a white stucco ranch house on an air force base in Turkey that was connected to the neighbors' by a carport. Stephanie Manning, a strawberry blond hippie-haired thirteen-year-old, lived next door. She babysat while my mom visited with the other wives on the base. She taught me to turn my body into a wheel, my arms and legs the spokes, in between our Fiat and her family's station wagon. I felt unfettered and invincible. Special. Other kids my age could barely run, and I was turning perfect cartwheels on the cement without ever suffering so much as a scraped knee.

We went to Turkey in the fall of 1972, during the waning days of the Vietnam War. My father was sent there on the Berry Plan, which required that after completing his residency, he serve two years as a physician in the service, thus avoiding combat. He requested a remote assignment that allowed him to take his family. He was appointed as the pediatrician in the infirmary on the air force base near Istanbul, tending to the children of the families stationed there.

We moved halfway around the world, an adventurous prospect for my mother, who had envisioned a more traditional life as an upper-middle-class doctor's wife. They'd been high school sweethearts, and she'd put him through medical school, drawing blood from rabbits' hearts in a biology lab. A comfortable suburban existence was the least she could expect. But she embarked on the adventure, seven months' pregnant with her second child. Upon arrival, we lived in a trailer until being assigned housing. I liked the trailer because everything was miniature, perfectly tailored for me.

In December, after we moved into our base housing, my mother was airlifted by helicopter to the nearest birthing hospital, in Ankara. When she came home just before my first white Christmas, she brought my brother, Christopher. We had no long-distance telephone service. The phones only allowed us to call the other houses on the base. My parents sent audiotapes back home to my grandmother in Atlantic City, New Jersey, laughing about how fat and ugly this new baby was. They also sent pictures of me. My grandmother wrote a letter back scolding my Jewish parents for illicitly naming my brother after Christ while praising her first grandchild as a Joey Heatherton look-alike. I didn't know who Joey Heatherton was, but I assumed she was pretty.

When the snow cleared in the spring, my single cartwheel turned cautiously on the asphalt between the automobiles transformed into endless rows down the steep hill in our backyard. I loved the feel of whirling so fast that I was on the brink of losing control. I'd lose my bearings, spinning from bodily memory and sheer gravity, landing in a heap at the bottom of the dell. I'd tear back up the hill and do it again, audacious and exhilarated. When I'd yell for my mom, she'd come to the back window and watch me spin myself into giggly, dizzy fits. But mostly she left me alone, free to play without parental interference. I'd pass whole afternoons turning down that hill, invigorated by pure speed and independence.

I'd return home at dusk, ready for dinner. I'd make my famous pretzel-and-cheese salad. Not very saladlike, this concoction consisted of torn-up yellow processed cheese and pretzel sticks. My parents indulged me and served this with our meal every night. They even pretended to eat it.

I was permitted to make many of my own decisions. And live with the consequences. My parents were committed to not overprotecting their children, to teaching us lessons by allowing us to make mistakes. They did this in small ways, not dangerous ones. When I chose to wear my red raincoat in twenty-below-zero weather, I was cold. When I refused to go to sleep until they did, I was tired and grumpy in preschool the next day and the teachers were short-tempered with me. When I said I wanted more broccoli with dinner—all the broccoli in the bowl on the table—I was forced to eat it all and became sick with an unbearable stomachache.

Heavily influenced by the popularity of Dr. Benjamin Spock and his book The Common Sense Book of Baby and Child Care, my parents were avid practitioners of his philosophy: treat your child as a person, an individual, rather than a thing to be trained and disciplined. By the time I was four, I was the embodiment of Spock-fashioned, parental-inspired spirited individualism.

In 1974 we returned to the States and bunked with my maternal grandmother in Atlantic City. Nannie, as we called her, was hesitant to take us in, compulsive about the cleanliness of her home and particular about the designation of knickknacks in her living room. She kept plastic runners on the lime-green carpet at all times to prevent wear-out. She covered her white vinyl couch with green piping (it matched the rug) with even more plastic to avoid stains on the stainproof fabric. She followed drink-wielding guests (her family in this case) around with a can of Pledge and a damp dishrag, wiping up tables to prevent glass rings.

When I demanded a fruit-adorned decorative plate for my postdinner cookies, my grandmother was flattered. I'd taken note of the carefully-thought-through details of her decorating scheme. Though the plate was perched high on a frieze adorning the kitchen's molding, she obliged me, pulling a stepladder from the laundry room to fetch the dish for her only granddaughter. At sixty, she was agile as she climbed the steps on her tiptoes in glamorous heeled house slippers. I was smug even as my mother urged me to let my grandmother off the hook, tell her I didn't really want the plate with purple plums on it. But I did want it. And I didn't see why she shouldn't go to any lengths to get me what I required. When Nannie pulled it triumphantly from the shelf, I smiled a self-satisfied smile and ate my cookies like the Joey Heatherton–like star of the family that I knew myself to be.