Accessibility links
God of the Rodeo NPR coverage of God of the Rodeo: The Quest for Redemption in Louisiana's Angola Prison by Daniel Bergner. News, author interviews, critics' picks and more.

God of the Rodeo

God of the Rodeo

The Quest for Redemption in Louisiana's Angola Prison

Traces a year in the lives of six convicts at Louisiana's most fearsome maximum security prison, revealing both the brutality of their lives and the human emotions that surface as they compete in the annual prison rodeo. Reprint.

NPR stories about God of the Rodeo

April 17, 2008 • Hidden Kitchens travels to the Louisiana State Penitentiary and the world of unexpected, below-the-radar, down-home convict cooking at the Angola Prison Rodeo. The event, which draws thousands of spectators, features traditional dishes prepared and sold by inmates at the prison farm.

Excerpt: God Of The Rodeo 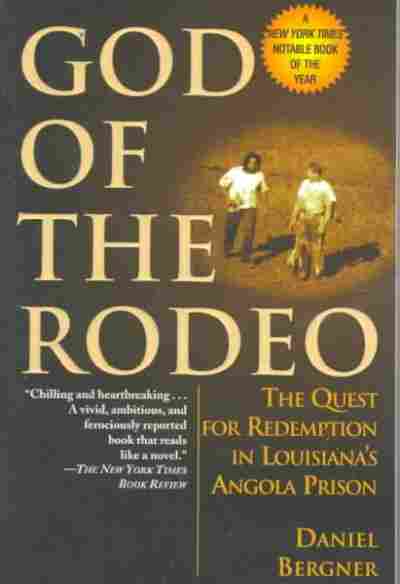 When he had finished work--building fence or penning cattle or castrating bull calves with a knife supplied by his boss on the prison farm--Johnny Brooks lingered in the saddle shed. The small cinder-block building is near the heart of Angola, Louisiana's maximum-security state penitentiary. Alone there, Brooks placed his saddle on a wooden rack in the middle of the room, leapt into it, and imagined himself riding in the inmate rodeo coming up in October. He prepared himself. The afternoon he first showed me what he did, the shed's corrugated metal door was half shut. The air in the unlit room had a dusky, textured quality, almost like the weave of a fabric. He floated on it, the fabric. To vault himself into the saddle, which rested at chest height, he did not use a stirrup. Nor, it seemed, did he bend his knees. He merely flicked his ankles to rise well above the leather, and for an instant he was frozen there, suspended above it, legs spread in perfect symmetry and spine impeccably upright.

That morning, in early September, I had watched him train a colt in a tight, fenced ring. Brooks stood at the center and taught the young quarter horse to cut, to switch directions fast, on command, so that eventually it could work the cattle. "Get around there," he demanded. "Get around; get around." And warned, "Better behave yourself." The colt kept half an eye on Brooks always. Brooks's voice was quiet, but the horse had no desire to feel the whip he carried. And though floggings were a thing long past at Angola, Brooks maintained his own sidelong glance on his boss, one of the freemen who ran the range crew, leaning against the fence. The sleeves of Brooks's T-shirt looked taut as rubber bands around his muscles, which were thick as tree roots. His boss was short, heavy, more like a softening stump. "Give me handle," he said, and Brooks answered, "Yassuh," and "Yassuh" was much of what I heard him say during the first weeks I knew him, whether in response to me or to prison employees. He kept his shoulders stooped. His head hung slightly. Often his eyes were lowered. He had, at times, an unrestrained, affecting smile that included his eyes, though he was missing three bottom teeth and the upper ones didn't look so healthy. He was a caricature, an illusion from another era, humble black servant, Stepin Fetchit.

"Yassuh," he replied after finishing with the colt, when another of the freemen called, "Mr. Jimmy wants his truck washed." He jogged over, caught the keys that were tossed his way, and hustled off to soap, scrub, rinse, and dry.
But later, inside the saddle shed, his shoulders were straight and his speech gained authority. The air seemed not only textured but, like the air over all of Angola's vast grounds, laden, palpably heavier than the atmosphere outside the gates. Five thousand men were incarcerated there. Eighty-five percent had killed or raped or robbed with violence. About eight in ten were sentenced either to life without parole or to so many years they might as well have been. (Louisiana had good claim to the toughest sentencing laws in the nation. It was one of only three states where all lifers were natural lifers--the governor's clemency offered the only way out. Other states with a natural life sentence used it sparingly.) Brooks, here for beating a woman to death during a robbery twenty-two years ago, was no longer floating above his saddle. He sat on the brown leather. Yet his new posture and voice, and his eyes that were suddenly direct and animated, defied more than his submissiveness; they defied Angola's excess gravity.

In the previous year's rodeo a gold-tinted bull had knocked him unconscious. Hurtling, the 1,600 pound animal snapped Brooks's neck back then forward, slamming his head into the knobby rock of muscle between the bull's shoulders. Now Brooks envisioned drawing the same bull, reminded himself to stay out of its "territory," not to let his weight fall too far back. Or he would lose all control and the whiplashing would start.

He schooled himself, in the hush of the room, to slice the air with the elbow of his free arm, the way the pros on TV did, for balance against the bull's spin. He taught himself to spur constantly against that spin, a plea--as much as a command--for an end to centrifugal force. The bull rope would be tied around his right hand. He imagined how hard he wanted the rope pulled by the inmate helping him in the chute. "It should feel like the tire of a truck pinning me there, Mr. Dan, he said. When I get done it should feel like my hand been inside a vise."

To fix his eyes only on the bull's left shoulder, never on its head--he trained himself about that, too. The head was a temptation but would trick you; the animal always went where the shoulder did. And he tried to anticipate the sensation when the chute gate opened and the bull exploded. Fear would blacken his mind, make him deaf to every sound. There would be no conscious control from then on. There would be only the reactions he tried to drill into himself here, daydreaming.

Besides last year's injury, Brooks had, after his first ride in his first rodeo more than a decade ago, been kicked in the back by the bull that threw him. He had then watched another convict thrown immediately in front of the chute. The bull found the man on the ground and shook him between its horns, cracking his spine--the man was left a quadriplegic, living in the Department of Corrections' version of a nursing home. A few years later, Brooks had broken his arm, and the year before last the flesh just below his eye had been sliced open by a bulls horn. Rodeo anywhere is a dangerous sport, bull riding its most extreme event. The prison staff who oversaw Brooks on the range crew, and who organized Angola's rodeo, were quick to remind me of this. Brooks's medical history would be about the gentlest on the pro tour. But many pros enter two rodeos in a weekend, ride several bulls every week, hundreds in a year. Each year Brooks mounted exactly four. His odds were not gentle at all.

They were not meant to be. The inmate rodeo, a thirty-two-year-old tradition that year, 1996, was held every Sunday in October and was billed by the prison as "The Wildest Show in the South." The public was invited through Angola's gates, lured by write-ups in the fun section of the local paper promising untrained convicts "thrown every which way." The men could not practice. Many, unlike Brooks and a few others who worked with horses as part of their prison jobs, had never so much as ridden a pony at a childhood street fair. They were not given the protective vests the pros wear to save themselves from shattered ribs and punctured lungs when the bronco kicks or the bull stomps down. Broken shoulders or wrists or ribs occurred daily. One past rider, petrified on his horse in a slapstick event called "Buddy Pick-Up," had died of a heart attack. Hours before the rodeo started, to be sure of getting in, the fans would line their cars along the shoulder of the road leading to Angola; there was rarely enough room for everyone in the prisons old 5,000-seat arena. Weeks before, the convicts signed up to compete in the spectacle--and signed a release absolving the prison of all liability--then begged their way into the featured events.

And yes, Brooks knew what the public came for. "Some of them, sure," he said when I asked about rooting for broken bodies. But not all. "And if you give them something good..." He spoke more of technique, of the bull's "pivot point," of a "suicide tie" for his right hand, of locking his right elbow, of watching J. W. Hart and Tuff Hedeman and Ted Nuce on ESPN, "studying them tight, tight." Then he talked again of the spectators, who cheered loudly for the best performances. He had heard it. He knew they did. And he recalled the day a rodeo clown--hired from the pro circuit to draw the bulls away from fallen riders--hugged him, lifted him off his feet in congratulations after a beautifully executed ride. "He liked what I done," Brooks remembered, his eyes completely at odds with the understatement of his words, "and he just picked me up like this."