Accessibility links
War and Decision NPR coverage of War and Decision: Inside the Pentagon at the Dawn of the War on Terrorism by Douglas J. Feith. News, author interviews, critics' picks and more.

Title
War and Decision
Subtitle
Inside the Pentagon at the Dawn of the War on Terrorism
Author
Douglas J. Feith

An influential international policy strategist presents an account of the controversial planning process for the war on terror, discussing the Pentagon's evolving stance as shaped by critical decisions that have been made during senior-level meetings.

NPR stories about War and Decision

April 9, 2008 • Plans for establishing a new Iraqi government were complicated by the role of Iraqi exile Ahmed Chalabi and his interaction with various U.S. agencies, says Douglas Feith, an architect of the war in Iraq.

April 8, 2008 • The U.S. government has been criticized for many aspects of its handling of the Iraq war. But Douglas Feith, an architect of the war, says one of his biggest regrets is not convincing top Pentagon officials to pay more attention to law and order immediately after the fall of Baghdad in 2003. 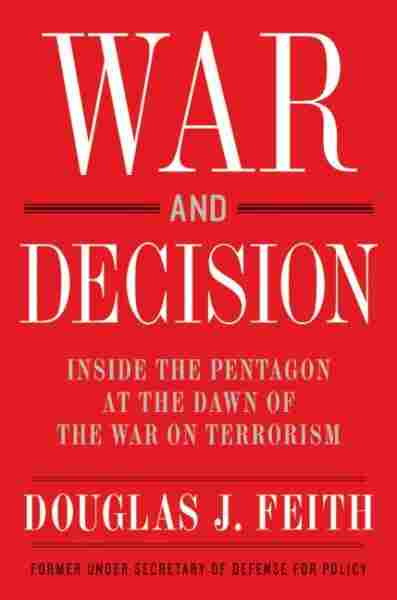 The threat of jihadist terrorism was on the list of U.S. government concerns at the start of the Bush Administration in early 2001, but it got less attention than Russia did. As a first order of business, President George W. Bush wanted his new Administration to ensure, if possible, that Russia and the United States would never revive the nuclear tensions of the Cold War.

His Secretary of Defense, Donald Rumsfeld, favored the effort. Over the years, Rumsfeld's view of the relationship between the two countries had been informed by his career as a member of Congress, U.S. Ambassador to NATO, White House Chief of Staff, Secretary of Defense, and corporate executive. The President assigned Rumsfeld a leading role in this Russia project—and so it became my first major assignment when I returned to the government in mid-July 2001 as Under Secretary of Defense for Policy, the top adviser on defense strategy and national security to Rumsfeld and Deputy Secretary of Defense Paul Wolfowitz.

I had worked at the Pentagon before, in the middle years of the Reagan Administration—a bitter period in the Cold War, a time of widespread and well-grounded fear of superpower conflict. A strategic missile fired from the Soviet Union could devastate an American city within seven minutes, and vice versa. Nations around the world watched the Soviet Union and the United States with anxious impotence, knowing that such a nuclear exchange would cause a global disaster.

The Cold War ended well, however, and the world became safer when the Soviet Union died a nonviolent death on Christmas Day in 1991. But Russia retained much of the Soviet Union's nuclear arsenal. Ten years later, President Bush entered office with the goal of making Russia a partner rather than an adversary in security affairs. He viewed Russia with hope because, as he saw it, neither he nor Russian President Vladimir Putin had the zero-sum-game mentality of the Soviet era. President Bush believed he could terminate the 1972 Anti-Ballistic Missile Treaty, build up our missile defenses, and work to enlarge NATO without reviving the Cold War or starting a new arms race.

I was pleased to be joining an Administration that aimed to identify common ground with Russia, dismantle Cold War structures, and change attitudes on both sides. Our success was far from certain. But the benefits—for us, the Russians, and the world—would be considerable if we did succeed.

In pursuit of these goals, on September 11, 2001, I was in Moscow for negotiations at the Russian Defense Ministry. It was my second visit to Russia since taking office less than two months before, part of the initiative to create a new framework for U.S.-Russian relations. But the news from New York that reached us a little before five o'clock that afternoon, Moscow time, forced me and everyone else in the United States to revise our thinking about national priorities.

As thoughtful and careful as we try to be, events have a way of confounding our assumptions. Even wisdom is no proof against surprises. It appreciates the proverb: If you want to hear God laugh, tell him your plans.

My work that day at the Defense Ministry had ended with a joint news conference with my Russian counterpart, General Colonel Yuri Nikolayevich Baluyevsky, an assertive man who sometimes seemed nostalgic for the superpower contention of the bad old days. At the small, ad hoc news conference—known as a "press gaggle"—in the hallway outside the conference room, Baluyevsky and I briefly reviewed the day's discussions. The Russian journalists asked about the Anti-Ballistic Missile Treaty and the prospects for a new nuclear weapons reduction treaty.

After the gaggle, I was heading for the car with Assistant Secretary of Defense J. D. Crouch when a U.S. embassy press officer quietly buttonholed us. He'd just heard, by cell phone, that a plane had hit the World Trade Center.

Skeptical about the news—first reports are almost always wrong—I glanced at Crouch. A cool-headed, intellectual, gentlemanly but tough figure, Crouch had been a university professor and a police SWAT team volunteer officer between tours at the Pentagon. He signaled that he shared my wait-and-see attitude.

Crouch and I kept to our schedule, moving along to an event with English-speaking reporters. When we arrived, minutes later, the embassy press officer told us that a second plane had hit the World Trade Center. He handed me a cell phone, and through it I heard CNN broadcast President Bush's first remarks about the attacks, made from an elementary school in Sarasota, Florida. The President said, "Terrorism against our nation will not stand."

The phrase astonished me. This was more than a confirmation that something bad had happened in New York. The President's words clearly echoed those of his father after Saddam Hussein invaded Kuwait in August 1990, as the nation faced the prospect of war in the Persian Gulf.

I did not think this choice of words could have been a coincidence. The first President Bush avoided categorical statements, tending to preserve flexibility rather than invoke fundamental principles. So his unqualified pronouncement that "this will not stand, this aggression against Kuwait" was uncharacteristically bold and inflexible—and therefore memorable. When I heard his son use those same words, I commented to Crouch that the President seemed to be talking war. From our location, thousands of miles from Washington, I took the President's words as strategic guidance.

Our conference with the English-language journalists was in a new American-style hotel in Moscow, in a small meeting room full of cameras and boom mikes and reporters with writing pads. Crouch and I were immediately asked about the New York attack, but we had heard nothing then but snippets of news coverage. It was clear that something terrible had happened, but its magnitude was still unclear. The Pentagon had not yet been hit, and the World Trade Center had not yet collapsed.

My main recollection of this press event was the badgering of the New York Times reporter, who wanted Crouch and me to agree with him that if airplanes could attack the World Trade Center, it made no sense for the United States to invest in protection against ballistic missiles. I was eager to wrap up the event so that we could learn more about what had happened in New York.