A narrative memoir of the author's life in the wake of her daughter's tragic death describes the idiosyncratic network of friends she has gathered around herself and the realizations she has formed about such topics as love, parenthood, and addiction. 150,000 first printing.

NPR stories about The Sum of Our Days

April 13, 2008 • In The Sum of Our Days, Chilean novelist Isabel Allende updates her late daughter, Paula, on the dramatic family events since Paula's death in 1992. The memoir reveals the ups and downs that keep Allende's "tribe" thriving — and Allende writing.

Excerpt: The Sum Of Our Days 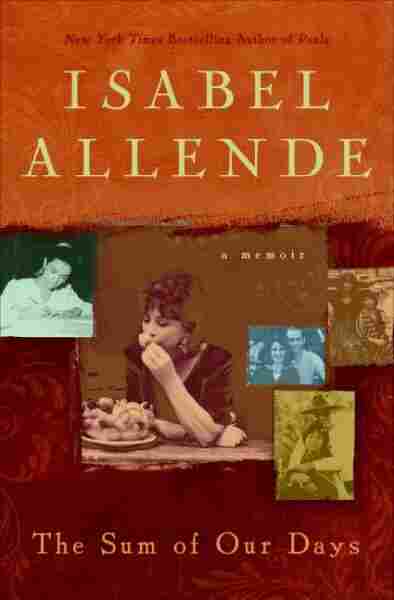 In the second week of December, 1992, almost as soon as the rain let up, we went as a family to scatter your ashes, Paula, following the instructions you had left in a letter written long before you fell ill. As soon as we advised them of your death, your husband, Ernesto, came from New Jersey, and your father from Chile. They were able to tell you good-bye where you lay wrapped in a white sheet waiting to be taken to the crematory. Afterward, we met in a church to hear mass and weep together. Your father was pressed to return to Chile, but he waited until the weather cleared, and two days later, when finally a timid ray of sun peered out, the whole family, in three cars, drove to a nearby forest. Your father went in the lead, guiding us. He isn't familiar with this region but he had spent the previous two days looking for the best site, one that you would have chosen. There are many places to choose from, nature is prodigal here, but by one of those coincidences that now are habitual in anything related to you, he led us directly to the forest where I often went to walk to ease my rage and pain while you were sick, the same one where Willie had taken me for a picnic shortly after we met, the same one where you and Ernesto liked to walk hand in hand when you came to visit us in California. Your father drove into the park, followed the road a little way, parked the car, and signaled us to follow him. He took us to the exact spot that I would have chosen, because I had been there many times to pray for you: a stream surrounded with tall redwoods whose tops formed the dome of a green cathedral. There was a fine, light mist that blurred the contours of reality: the light barely penetrated the trees, but the branches shone, winter wet. An intense aroma of humus and dill rose from the earth. We stopped at the edge of a pond formed by rocks and fallen tree trunks. Ernesto, serious, haggard, but now without tears because he had spilled them all, held the clay urn containing your ashes. I had saved a few in a little porcelain box to keep forever on my altar. Your brother, Nico, had Alejandro in his arms, and your sister-in-law, Celia, held Andrea, still a baby, wrapped in shawls and clamped to her breast. I carried a bouquet of roses, which I tossed, one by one, into the water. Then all of us, including Alejandro, who was three, took a handful of ashes from the urn and dropped them onto the water. Some floated briefly among the roses, but most sank to the bottom, like fine white sand.

"What is this?" Alejandro asked.

"Your aunt Paula," my mother told him, sobbing.

"It doesn't look like her," he commented, confused.... I will begin by telling you what has happened since 1993, when you left us, and will limit myself to the family, which is what interests you. I'll have to omit two of Willie's sons: Lindsay, whom I barely know-I've seen him only a dozen times and we've never exchanged more than the essential courteous greetings-and Scott, because he doesn't want to appear in these pages. You were very fond of that thin, solitary boy with thick eyeglasses and disheveled hair. Now he is a man of twenty-eight; he looks like Willie and his name is Harleigh. He chose the name Scott when he was five; he liked it and used it a long time, but during his teens he reclaimed the one given him.

The first person who comes to my mind and heart is Jennifer, Willie's only daughter, who at the beginning of that year had just escaped for the third time from a hospital where she had gone to find rest for her bones because of yet another infection, among the many she had suffered in her short life. The police had not given any indication that they were going to look for her; they had too many cases like hers, and this time Willie's contacts with the law didn't help at all. The physician, a tall, discreet Filipino who by dint of perseverance had saved her when she arrived at the hospital with a raging fever, and who by now knew her because he had attended her on two previous occasions, explained to Willie that he had to find his daughter soon or she would die. With massive doses of antibiotics for several weeks, he might be able to save her, he said, but we had to prevent a relapse, for that would be fatal. We were in the emergency room-yellow walls, plastic chairs, and posters of mammograms and tests for AIDS-which was filled with patients awaiting their turn to be treated. The doctor took off his round, metal-framed glasses, cleaned them with a tissue, and guardedly answered our questions. He had no sympathy for Willie or for me; he perhaps mistook me for Jennifer's mother. In his eyes we were guilty; we had neglected her, and now when it was too late, we had showed up acting distressed. He avoided going into details-patient information was confidential-but Willie could deduce that in addition to multiple infections and bones turned to splinters, his daughter's heart was on the verge of giving out. For nine years Jennifer had persisted in jousting with death.

We had been going to see her in the hospital for several weeks. Her wrists were tied down so that in the delirium of fever she couldn't tear out the intravenous tubes. She was addicted to nearly every known drug, from tobacco to heroin. I don't know how her body had endured so much abuse. Since they couldn't find a healthy vein in which to inject medications, they ...