The Language of God

The Language of God

A Scientist Presents Evidence for Belief

A head of the Human Genome Project and former atheist presents a scientific argument for the existence of God, revealing how science can support faith by citing the areas of nature that can and cannot be fully explained by Darwinian evolution.

NPR stories about The Language of God

March 7, 2008 • Scientist Francis Collins makes a case for the existence of God in his book The Language of God: A Scientist Presents Evidence for Belief. Collins, an evangelical Christian, headed the National Human Genome Research Project.

Francis Collins on 'The Language of God'

March 29, 2007 • Geneticist Francis Collins is director of the National Human Genome Research Project. He is also an evangelical Christian, and author of the book The Language of God: A Scientist Presents Evidence for Belief.

Francis Collins on 'The Language of God'

Excerpt: The Language Of God 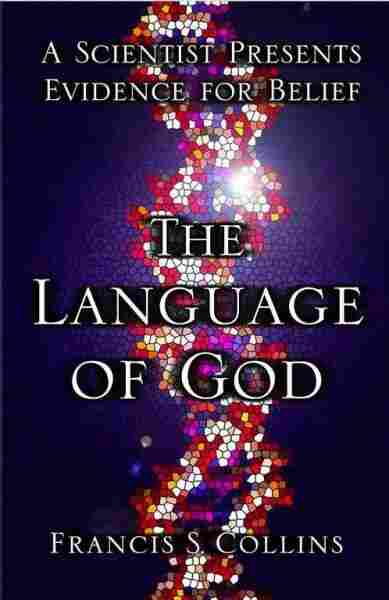 On a warm summer day just six months into the new millennium, humankind crossed a bridge into a momentous new era. An announcement beamed around the world, highlighted in virtually all major newspapers, trumpeted that the first draft of the human genome, our own instruction book, had been assembled.

The human genome consists of all the DNA of our species, the hereditary code of life. This newly revealed text was 3 billion letters long, and written in a strange and cryptographic four-letter code. Such is the amazing complexity of the information carried within each cell of the human body, that a live reading of that code at a rate of one letter per second would take thirty-one years, even if reading continued day and night. Printing these letters out in regular font size on normal bond paper and binding them all together would result in a tower the height of the Washington Monument. For the first time on that summer morning this amazing script, carrying within it all of the instructions for building a human being, was available to the world.

As the leader of the international Human Genome Project, which had labored mightily over more than a decade to reveal this DNA sequence, I stood beside President Bill Clinton in the East Room of the White House, along with Craig Venter, the leader of a competing private sector enterprise. Prime Minister Tony Blair was connected to the event by satellite, and celebrations were occurring simultaneously in many parts of the world.

Clinton's speech began by comparing this human sequence map to the map that Meriwether Lewis had unfolded in front of President Thomas Jefferson in that very room nearly two hundred years earlier. Clinton said, "Without a doubt, this is the most important, most wondrous map ever produced by humankind." But the part of his speech that most attracted public attention jumped from the scientific perspective to the spiritual. "Today," he said, "we are learning the language in which God created life. We are gaining ever more awe for the complexity, the beauty, and the wonder of God's most divine and sacred gift."

Was I, a rigorously trained scientist, taken aback at such a blatantly religious reference by the leader of the free world at a moment such as this? Was I tempted to scowl or look at the floor in embarrassment? No, not at all. In fact I had worked closely with the president's speechwriter in the frantic days just prior to this announcement, and had strongly endorsed the inclusion of this paragraph. When it came time for me to add a few words of my own, I echoed this sentiment: "It's a happy day for the world. It is humbling for me, and awe-inspiring, to realize that we have caught the first glimpse of our own instruction book, previously known only to God."

What was going on here? Why would a president and a scientist, charged with announcing a milestone in biology and medicine, feel compelled to invoke a connection with God? Aren't the scientific and spiritual worldviews antithetical, or shouldn't they at least avoid appearing in the East Room together? What were the reasons for invoking God in these two speeches? Was this poetry? Hypocrisy? A cynical attempt to curry favor from believers, or to disarm those who might criticize this study of the human genome as reducing humankind to machinery? No. Not for me. Quite the contrary, for me the experience of sequencing the human genome, and uncovering this most remarkable of all texts, was both a stunning scientific achievement and an occasion of worship.

Many will be puzzled by these sentiments, assuming that a rigorous scientist could not also be a serious believer in a transcendent God. This book aims to dispel that notion, by arguing that belief in God can be an entirely rational choice, and that the principles of faith are, in fact, complementary with the principles of science.

This potential synthesis of the scientific and spiritual worldviews is assumed by many in modern times to be an impossibility, rather like trying to force the two poles of a magnet together into the same spot. Despite that impression, however, many Americans seem interested in incorporating the validity of both of these worldviews into their daily lives. Recent polls confirm that 93 percent of Americans profess some form of belief in God; yet most of them also drive cars, use electricity, and pay attention to weather reports, apparently assuming that the science undergirding these phenomena is generally trustworthy.

And what about spiritual belief amongst scientists? This is actually more prevalent than many realize. In 1916, researchers asked biologists, physicists, and mathematicians whether they believed in a God who actively communicates with humankind and to whom one may pray in expectation of receiving an answer. About 40 percent answered in the affirmative. In 1997, the same survey was repeated verbatim — and to the surprise of the researchers, the percentage remained very nearly the same.

So perhaps the "battle" between science and religion is not as polarized as it seems? Unfortunately, the evidence of potential harmony is often overshadowed by the high-decibel pronouncements of those who occupy the poles of the debate. Bombs are definitely being thrown from both sides. For example, essentially discrediting the spiritual beliefs of 40 percent of his colleagues as sentimental nonsense, the prominent evolutionist Richard Dawkins has emerged as the leading spokesperson for the point of view that a belief in evolution demands atheism. Among his many eye-popping statements: "Faith is the great cop-out, the great excuse to evade the need to think and evaluate evidence. Faith is belief in spite of, even perhaps because of, the lack of evidence.... Faith, being belief that isn't based on evidence, is the principal vice of any religion."

On the other side, certain religious fundamentalists attack science as dangerous and untrustworthy, and point to a literal interpretation of sacred texts as the only reliable means of discerning scientific truth. Among this community, comments from the late Henry Morris, a leader of the creationist movement, stand out: "Evolution's lie permeates and dominates modern thought in every field. That being the case, it follows inevitably that evolutionary thought is basically responsible for the lethally ominous political developments, and the chaotic moral and social disintegrations that have been accelerating everywhere....When science and the Bible differ, science has obviously misinterpreted its data."

This rising cacophony of antagonistic voices leaves many sincere observers confused and disheartened. Reasonable people conclude that they are forced to choose between these two unappetizing extremes, neither of which offers much comfort. Disillusioned by the stridency of both perspectives, many choose to reject both the trustworthiness of scientific conclusions and the value of organized religion, slipping instead into various forms of antiscientific thinking, shallow spirituality, or simple apathy. Others decide to accept the value of both science and spirit, but compartmentalize these parts of their spiritual and material existence to avoid any uneasiness about apparent conflicts. Along these lines, the late biologist Stephen Jay Gould advocated that science and faith should occupy separate, "non-overlapping magisteria." But this, too, is potentially unsatisfying. It inspires internal conflict, and deprives people of the chance to embrace either science or spirit in a fully realized way.

So here is the central question of this book: In this modern era of cosmology, evolution, and the human genome, is there still the possibility of a richly satisfying harmony between the scientific and spiritual worldviews? I answer with a resounding yes! In my view, there is no conflict in being a rigorous scientist and a person who believes in a God who takes a personal interest in each one of us. Science's domain is to explore nature. God's domain is in the spiritual world, a realm not possible to explore with the tools and language of science. It must be examined with the heart, the mind, and the soul — and the mind must find a way to embrace both realms.

I will argue that these perspectives not only can coexist within one person, but can do so in a fashion that enriches and enlightens the human experience. Science is the only reliable way to understand the natural world, and its tools when properly utilized can generate profound insights into material existence. But science is powerless to answer questions such as "Why did the universe come into being?" "What is the meaning of human existence?" "What happens after we die?" One of the strongest motivations of humankind is to seek answers to profound questions, and we need to bring all the power of both the scientific and spiritual perspectives to bear on understanding what is both seen and unseen. The goal of this book is to explore a pathway toward a sober and intellectually honest integration of these views.

The consideration of such weighty matters can be unsettling. Whether we call it by name or not, all of us have arrived at a certain worldview. It helps us make sense of the world around us, provides us with an ethical framework, and guides our decisions about the future. Anyone who tinkers with that worldview should not do it lightly. A book that proposes to challenge something so fundamental may inspire more uneasiness than comfort. But we humans seem to possess a deep-seated longing to find the truth, even though that longing is easily suppressed by the mundane details of daily life. Those distractions combine with a desire to avoid considering our own mortality, so that days, weeks, months, or even years can easily pass where no serious consideration is given to the eternal questions of human existence. This book is only a small antidote to that circumstance, but will perhaps provide an opportunity for self-reflection, and a desire to look deeper.

First, I should explain how a scientist who studies genetics came to be a believer in a God who is unlimited by time and space, and who takes personal interest in human beings. Some will assume that this must have come about by rigorous religious upbringing, deeply instilled by family and culture, and thus inescapable in later life. But that's not really my story.