Accessibility links
Out of the Ashes NPR coverage of Out of the Ashes: The Resurrection of Saddam Hussein by Andrew Cockburn and Patrick Cockburn. News, author interviews, critics' picks and more.

The Resurrection of Saddam Hussein

by Andrew Cockburn and Patrick Cockburn

Two respected investigative journalists offer an indepth analysis of the politics of Iraq, the true nature of the regime of Saddam Hussein and his family, and the internecine struggles within the CIA that have disrupted efforts to dislodge Hussein. Reprint.

NPR stories about Out of the Ashes

February 21, 2008 • The cease-fire that's kept Shiite militias in check for months is in danger of unraveling. And some U.S.-backed Sunni militias are growing restless. Patrick Cockburn, author and Iraq correspondent for The Independent in London, offers observations on war in Iraq.

Excerpt: Out Of The Ashes 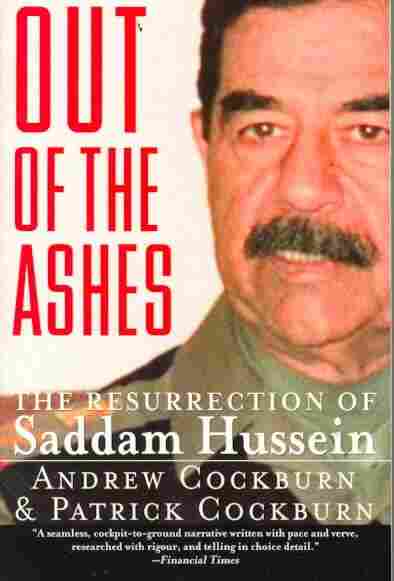 The Resurrection of Saddam Hussein


Saddam at the Abyss

Fifty miles from the capital, returning Iraqi soldiers could already see the black cloud over the blazing al-Dohra oil refinery on the edge of Baghdad. It was early March 1991, and these exhausted men were the remnants of the huge army sent to occupy Kuwait after its conquest by Saddam Hussein the previous year. Now, routed by the United States and its allies, they were in the last stages of a three-hundred-mile flight from the battlefields. They were crowded into taxis, trucks, battered buses--anything on wheels. One group clung desperately to a car transporter.

Soon they were inside the city, only to find it utterly changed. Just six weeks before, the low-lying Iraqi capital on the banks of the Tigris had been a rich modern city, built with the billions of dollars flowing from the third-largest oil reserves in the world. Expressways and overpasses sped traffic past gleaming modern hotels, government buildings, and communications centers. Lavishly equipped hospitals gave the citizens medical care as good as could be found in Europe or the United States. Even the poor were used to eating chicken once a day. Then, beginning at 3:00 a.m. on January 17, precisely targeted bombs and missiles had thrust Baghdad and its 3.5 million inhabitants abruptly back into the third world.

There was no power because all the power stations had been knocked out in the first days of bombing. The people of the city huddled in darkness. The stench of decaying meat hung over the more prosperous districts as steaks in carefully stocked freezers slowly rotted. In the hospitals, doctors trained in the finest medical schools in Europe operated by flashlight.

Like any advanced society, Iraq had been totally dependent on electricity. Water came from the wide Tigris River that flows through the city, pumped and purified by what had been one of the most modern and efficient systems in the world. Now a jury-rigged system brought a muddy brown liquid spluttering out of the taps for just one hour a day. Oil billions had given the city an up-to-date sewage system, but the pumps at the treatment plants had been silent since the power generators had been hit, and every day 15 million gallons of untreated sewage poured into the Tigris.

Few cars moved along the streets and tree-lined avenues because the gas stations had long since exhausted their supplies and al-Dohra, along with all other Iraqi refineries, had been smashed in the bombing. In the sparse traffic, black smoke poured from the exhausts of some vehicles, a symptom of watered-down gas available on the black market at a hundred times the prewar price.

Familiar landmarks lay in ruins, like the handsome Jumhuriya Bridge across the Tigris in the city center, now trisected by allied bombs. Surviving bridges had old sacking draped over the sides and little saplings tied to the railings, a vain effort to deceive the computers and laser-targeting systems of the enemy weapons. Symbols of authority, like the Ministry of Justice, at first glance seemingly untouched, were empty shells, their insides gutted by high explosives. The phones had stopped working when two laser-guided bombs had hit the communications center across from the Mansour Melia Hotel and melted the satellite dishes on the roof, isolating Iraqis from the outside world and each other.

The air was full of smoke from the burning refinery and from piles of tires set alight during the war to confuse allied warplanes. The restaurants on Sadoun Street were shuttered and empty, replaced by curbside cooking fires fueled by branches torn from trees by the bombs. Over everything there hung the yellow haze of a winter fog.

Somewhere beneath the gloom was the man who had caused the disaster, President Saddam Hussein, his thoughts and actions, even his whereabouts in those dramatic days, a mystery to his people and to the outside world.

Physically, he had changed since the war had begun. In the months of crisis between his invasion of Kuwait on August 2, 1990, and the start of the United States-led counterattack in January 1991, the Iraqi leader had played to a global audience. Sleek in the beautiful silk suits created by his Armenian tailor, Saddam had sat in his palaces declaiming to visiting statesmen and journalists on the justice of that invasion, defying the international coalition that was building up its forces to oust him.

Now the president of Iraq moved about his capital like a man on the run. Like the rest of the high command, he had been careful to stay out of the underground command bunkers built for the war against the Iranians in the 1980s. He had known that the Americans would carefully target these places and that their bombs could--and did--penetrate the thickest concrete. The bombing had stopped, but still he was sleeping in a different house every few nights, staying mainly in the middle-class al-Tafiya district of the city, quiet because many of its inhabitants had fled Baghdad.

Once upon a time, Saddam had sought to confuse potential assassins about his movements by deploying whole fleets of identical Mercedeses, choosing the convoy he would use only at the last minute and dispatching the others in different directions as a distraction. These days Saddam drove only in cheap, inconspicuous cars, accompanied by a single bodyguard--a colonel who himself wore no insignia of rank. The few trusted aides and intimates he visited saw a shrunken figure. He had lost as much as forty pounds in the first month of the war. Now the olive-green uniform of his ruling Baath Party hung ever more loosely on him. "I don't know what God will bring tomorrow," he remarked despairingly to one of his intelligence chiefs.Continues...