Being Human in the Age of the Electronic Mob

In a critical study of modern technology, a senior editor at The New Republic analyzes the World Wide Web and complementary developments in terms of its negative influence on the people who use them, arguing that modern technology has given rise to a new, malevolent mass culture that threatens the ideals of humanity, democracy, and the individual. 25,000 first printing.

NPR stories about Against the Machine

January 28, 2008 • The Internet has fundamentally changed the nature of human interaction, says critic Lee Siegel. In his latest book, Against the Machine: Being Human in the Age of the Electronic Mob, Siegel argues for a more evolved online universe.

Excerpt: Against The Machine 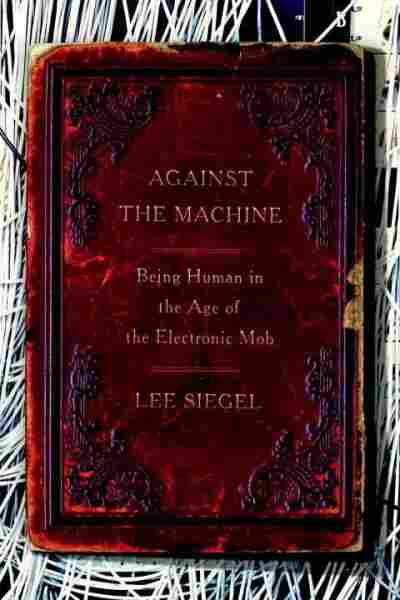 “The World Is All That Is the Case”

I GO TO STARBUCKS, sit down, open my laptop, and turn it on. In the old days—ten years ago—I would be sitting with a pen and notebook, partly concentrating on my writing and partly aware of the people in the room around me. Back in that prehistoric time, my attention faced outward. I might see someone I know, or someone I’d like to know. I might passively enjoy trying to figure out why that couple in the middle of the room are speaking so intensely—are they moving closer together to relish their intimacy or because there is a crisis in their intimacy? And who is that guy with the fedora—and why the red sneakers? Is he an original, or the copy of an original? I might be watching everyone, but some people might be watching me, too. My situation is just as permeable as theirs. A stranger could come over to my table at any minute, his sudden physical presence before me unexpected, incalculable, absolutely enigmatic in the seconds before he becomes one kind of situation or another.

But here I am, sitting in the future—I mean the present—in front of my laptop. Just about everyone around me has a laptop open also. The small mass of barely variegated gray panels looks like a scene out of Fritz Lang’s Metropolis, but with modems and Danishes. I can hardly see anyone else’s face behind the screens, and no one seems to be doing anything socially or psychologically that might be fun to try to figure out. They are bent into their screens and toward their self–interest. My attention, too, is turned toward my ego. But I am paying attention in a different way from what I do when I read a book or a newspaper. I am opening e–mail sent to me, writing e–mail expressing one or another desire that belongs to me, clicking on Google looking for information to be used by me. Ten years ago, the space in a coffeehouse abounded in experience. Now that social space has been contracted into isolated points of wanting, all locked into separate phases of inwardness.

The new situation doesn’t represent the “lack of community” suddenly produced by the Internet. That is the hackneyed complaint made, again and again, by people who don't seem to have thought through the unlovely aspects of “community”—its smug provincialism and punitive conventionalism, its stasis and xenophobia—which was in any case jeopardized and transformed by the advent of modernity two hundred years ago. The simple fact is that sometimes you don't want the quiet conformities induced by “community”; sometimes you simply want to be alone, yet together with other people at the same time. The old–fashioned cafe provided a way to both share and abandon solitude, a fluid, intermediary experience that humans are always trying to create and perfect. The Internet could have been its fulfillment. But sitting absorbed in your screenworld is a whole other story. You are socially and psychologically cut off from your fellow caffeine addicts, but mentally beset by e–mails, commercial “pop-ups,” and a million temptations that may enchant in the moment—aimed as they are at your specific and immediate interests and desires—but in retrospect are time–wasting ephemera. It’s not community that the laptopization of the coffeehouse has dispelled. It’s the concrete, undeniable, immutable fact of our being in the world.

Before our screens, experience is collapsed into gratifying our desires on the one hand, and on the other either satisfying or refusing to satisfy the soliciting desires of other people—or entities. As the Viennese philosopher Ludwig Wittgenstein famously said, “The world is all that is the case.” We have been flung into the world whether we like it or not. But the Internet creates a vast illusion that the physical, social world of interacting minds and hearts does not exist. In this new situation, the screen is all that is the case, along with the illusion that the screen projects of a world tamed, digested, abbreviated, rationalized, and ordered into a trillion connected units, called sites. This new world turns the most consequential fact of human life—other people—into seemingly manipulable half presences wholly available to our fantasies. It’s a world controlled by our wrist and finger.

Yet the untamed, undigested, unrationalized, uncontrolled world is still there. People as thinking, feeling beings still exist. What form, then, do we take, in a world where there is—how else can I put it?—no world at all? To put it another way: What kind of idea do we have of the world when, day after day, we sit in front of our screens and enter further and further into the illusion that we ourselves are actually creating our own external reality out of our own internal desires? We become impatient with realities that don’t gratify our impulses or satisfy our picture of reality. We find it harder to accept the immutable limitations imposed by identity, talent, personality. We start to behave in public as if we were acting in private, and we begin to fill our private world with gargantuan public appetites. In other words, we find it hard to bear simply being human.

This situation is not a crisis of technology. Rather, it is a social development that has been embodied in the new technology of the Internet, but not created by the Internet. The sudden onset of Web culture is really a dramatic turn in the timeless question of what it means to be a human being. What a shame that transformative new technologies usually either inspire uncritical celebration or incite bouts of nostalgia for a prelapsarian age that existed before said technology—anything for an uprising against cellphones and a return to the glorious phone booths of yore! The advent of new technologies pretty quickly becomes a pitched battle between the apostles of edge and Luddites wielding alarmist sentiments like pitchforks. Because each side is a caricature of itself, no one takes what is at stake very seriously at all.

And they are caricatures, for anyone who thinks technological innovation is bad in and of itself is an unimaginative crank. (I would rather go live on Pluto than return to the days of the phone booth and the desperate search for change.) But anyone who denies that technology has the potential to damage us if it is not put to good use is either cunning or naive. In the case of the Internet, the question is whether we let this remarkably promising opportunity—which, as we’ll see, has until now largely been developed in service to commerce and capital—shape us to its needs or put it in the service of our own. Do we keep acquiescing in the myopic glibness and carelessness that characterize how so many of us are using the Internet? Do we keep surrendering to the highly purposeful way vested interests are foisting it upon us?

The future, we were once told, shocked. Well, the future is here. But no one is shocked.

The sensational evidence of upheaval is everywhere. You can read about it in the newspaper or see it on the news by the hour. A lonely middle–aged carpenter in Arizona meets a Brazilian woman online, visits her in Rio de Janeiro twice, and then, on his third encounter with her, is murdered by his new girlfriend, her real boyfriend, and a hired assassin. A sting operation sweeps up hundreds of pedophiles luring their prey in Internet chat rooms. Computer hackers use the Internet to nearly bring down the government of Estonia. An anonymous Web site reveals the identities of federally protected witnesses in capital cases. Social–networking sites like MySpace and the videoblog site called YouTube turn the most graphic inhumanity—a Texas policeman puts up photos of a dismembered woman; anonymous users post footage of American soldiers in Iraq being gunned down—into numbing new forms of entertainment.

The Internet’s most consequential changes in our lives, however, are the ones woven into our everyday routines. Maybe your teenage son—or daughter—spends hours every day and night corresponding with dozens of new “friends” on MySpace or Facebook; perhaps he’s uploading a forty–minute–long video of himself dancing naked, alone in his room, onto YouTube, one of the world’s most highly trafficked sites. Maybe your officemate is addicted to political blogs like Little Green Footballs, or Instapundit, or Firedoglake, in which dozens, sometimes hundreds, of people, argue with each other passionately, sometimes abusively, on interminable threads of commenters. Or your other officemate spends all of his time buying merchandise on eBay, or your boss, a high–powered attorney, closes her door on her lunch hour and logs on to JDate, a Jewish dating service, where she fields inquiries from dozens of men.

Then again, maybe your husband died four years ago from a rare disease, and thanks to information you discovered on the Web, you were able to find a drug that kept him alive for twice as long as he would have lived without it. An Internet grief support group helped get you through the pain of your loss and introduced you to people who are now trusted friends. They led you, in turn, to an online dating service where you met your second husband, and began a new life.

Like all significant technologies, the Internet is a blessing and a curse. Or, rather, it is obviously a blessing and obscurely a curse. It would be tedious to recite the Internet’s wonders as a tool for research and a medium for connectivity in detail here—in any case, those wonders have been touted far and wide for the last decade by an all–too–willing media. But the transformations are real. For the first time in human history, a person can have romance, friendship, and sex (sort of); be fed, clothed, and entertained; receive medical, legal, and just about every other type of advice; collect all sorts of information, from historical facts to secrets about other people—all without leaving home. For the first time in human history, a technology exists that allows a person to lead as many secret lives, under a pseudonym, as he is able to manage. For the first time in human history, a person can broadcast his opinions, beliefs, and most intimate thoughts--not to mention his face, or any other part of his body—to tens of millions of other people.

The simple fact is that more and more people are able to live in a more comfortable and complete self–enclosure than ever before.