God in the White House

God in the White House

A History: How Faith Shaped the Presidency from John F. Kennedy to George W. Bush

A history of the role of religion in the White House throughout the past quarter century considers the faiths of its presidents, in an account that explains how religion both reflected and influenced each leader's personal life, policies, and campaigns.

NPR stories about God in the White House

January 25, 2008 • In 1960, presidential candidate John F. Kennedy asked the nation to disregard his religion; in 2000, George W. Bush stated Jesus was his favorite philosopher. How did faith become such an important criterion for the presidency? Religion professor and evangelical newspaper columnist Randall Balmer explains.

Excerpt: God In The White House 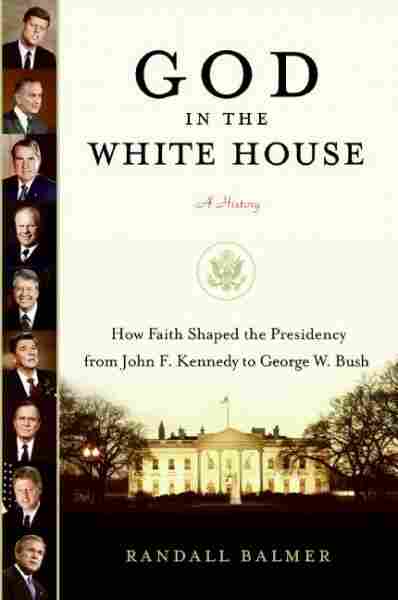 God in the White House: A History

How Faith Shaped the Presidency from John F. Kennedy to George W. Bush

On a Monday evening, September 12, 1960, the junior senator from the commonwealth of Massachusetts approached the dais in the ballroom of the Rice Hotel in downtown Houston. "While the so-called religious issue is necessarily and properly the chief topic here tonight," John F. Kennedy began, "I want to emphasize from the outset that we have far more critical issues to face in the 1960 election." The Democratic nominee for president had just completed another hot, exhausting day of campaigning across the state of Texas. Together with his running mate, Senator Lyndon B. Johnson, Kennedy had already visited El Paso, Lubbock, and San Antonio in what the New York Times characterized as "the largest aerial campaign armada in history."1

Kennedy had been greeted by "tumultuous cheers from many thousands of Texans" that day, but his reception at the Rice Hotel was noticeably more tepid. "I believe in an America that is officially neither Catholic, Protestant nor Jewish," Kennedy continued, "where no public official either requests or accepts instructions on public policy from the pope, the National Council of Churches or any other ecclesiastical source—where no religious body seeks to impose its will directly or indirectly upon the general populace or the public acts of its officials—and where religious liberty is so indivisible that an act against one church is treated as an act against all."2

Kennedy issued a ringing endorsement of the separation of church and state that evening—"I believe in an America where the separation of church and state is absolute," he said—but he clearly wanted to be addressing issues other than religion. And by standing before the gathered members of the Greater Houston Ministerial Association, the Democratic nominee had entered the belly of the beast. Houston was not exactly friendly territory for a Roman Catholic running for president, and the events of the preceding weeks clearly had frustrated the young senator, who had hoped that, by this late stage in the campaign, he would have been able to shrug off what was almost universally described as the "religious issue."

Kennedy, of course, was not the first Roman Catholic in American history to run for the presidency. In 1928 Alfred E. Smith, the governor of New York, had won the Democratic nomination and the right to square off against Herbert Hoover, secretary of commerce under Calvin Coolidge and the Republican nominee. In December 1923, as Smith was gearing up for an earlier run at the Democratic nomination, William MacDonald, pastor of the First Presbyterian Church in Queens, New York, had organized an anti-Smith rally. Five thousand -people attended, according to the New York Times; MacDonald led the congregation in the singing of "Stand Up for Jesus" as white-robed Klansmen processed into the auditorium. A particular Klansman, known as the "Human Dynamo," concluded his remarks by shouting, "Thank God there are six million -people in the United States who have pledged their lives that no son of the Pope of Rome will ever sit in the Presidential chair!" Several days later, two fire companies were summoned to tear down a flaming cross, twenty-five feet high and fifteen feet wide at the crossbar, near the site of the Klan rally.3

In the course of the 1928 campaign, Smith sought to defuse the issue of his religious affiliation with a speech in Oklahoma City, but his Catholicism continued to dog him throughout the campaign. He tangled with John Roach Straton, the arch-fundamentalist pastor of Calvary Baptist Church in New York City, who identified the Democratic candidate with "the forces of vice, lawlessness and drunkenness." Nativist groups charged that Smith would be a tool of the Vatican, and scurrilous pamphlets warned that as president, Smith would annul Protestant marriages and establish Roman Catholicism as the religion of the United States. Although the Democratic platform promised "an honest effort to enforce" Prohibition, Smith's long-standing opposition to the Eighteenth Amendment revived the nineteenth-century nativist associations between "Rum and Romanism." Hoover, on the other hand, defended Prohibition as "a great social and economic experiment noble in motive and far-reaching in purpose." In the traditionally Democratic South, the Ku Klux Klan campaigned for Hoover, a Quaker, and against the Roman Catholic.4

When Hoover won decisively in the 1928 election—58 percent of the popular vote and 444 to 77 in the electoral college—popular lore had it that Smith sent a one-word telegram to the Vatican: "Unpack."

Protestant suspicions of Roman Catholicism, however, refused to abate. The fact that the sons of Catholic immigrants enlisted for military ser-vice during World War II demonstrated their patriotism, even though they sometimes fought against the countries from which their parents and grandparents emigrated. The G.I. Bill of Rights, passed by Congress in 1944, provided these same second-generation immigrants the opportunity to attend college and thereby to toe the first rung on the ladder of upward mobility toward the middle class.

Many American Catholics made that ascent in the postwar years, but not without resistance. In 1949 nativism once again reared its ugly head. In March of that year, Beacon Press, a liberal publisher in Boston, issued the first edition of Paul Blanshard's American Freedom and Catholic Power. "When a church enters the arena of controversial social policy and attempts to control the judgment of its own -people (and of other -people) on foreign affairs, social hygiene, public education and modern science," the author warned, "it must be reckoned with as an organ of political and cultural power." The book cited Catholic efforts to oppose birth control and divorce laws, noted the segregation of Catholic children into parochial schools, and suggested that the political muscle of American Catholics was being exerted "to bring American foreign policy into line with Vatican temporal interests."5

What made Blanshard's treatise so remarkable was its provenance. Unlike the sensationalist nineteenth-century nativist literature, much of which salaciously conjured the supposed goings-on in Catholic convents, Blanshard was both a journalist and an attorney, educated . . .