Voyages of a Viking Woman

Offers a dramatic reconstruction of the life and times of Gudrid, a Viking woman who, according to Icelandic sagas, arrived in the New World, spent three years there, and gave birth to a baby, before sailing home some five hundred years before Columbus, drawing on the latest archaeological data, scientific research, and cutting-edge technology to trace her odyssey.

NPR stories about The Far Traveler

The Ones That Got Away: Books Not to Miss

December 24, 2007 • NPR's Lynn Neary talks with book writers — Laura Miller of Salon.com, and blogger Mark Sarvas of The Elegant Variation — about worthy books that got overlooked by the mainstream book-review sections in 2007. Here's a rundown of their recommendations.

The Ones That Got Away: Books Not to Miss 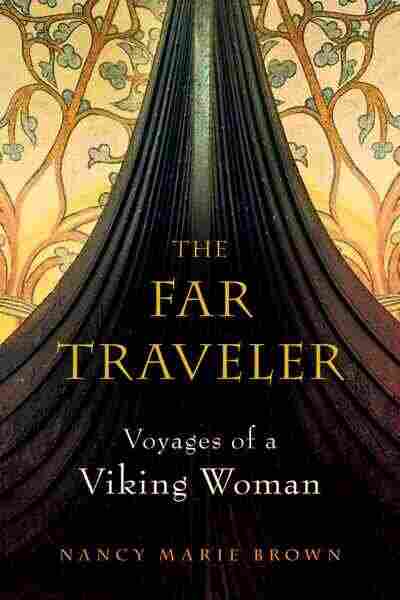 They set sail in good weather. But once they were at sea, the fair winds died. They were tossed this way and that and made no headway all summer. Sickness set in. . . . Half their people died. The seas rose, and they were faced with danger on all sides.
—The Saga of Eirik the Red

The first time i saw a viking ship in the water, i was struck with the desire to stow away on it. Writers, even the normally sedate scholarly type, tend to wax effusive about Viking ships. They were “unrivaled,” “the best and swiftest ships of their time,” “the swift greyhounds of the oceans,” “the ultimate raiding machine,” “a masterpiece of beauty,” “the most exquisite examples of sophisticated craftsmanship,” “a poem carved in wood.” “What temples were to the Greeks,” wrote one expert, “ships were to the Vikings.” Said another, “Plato may have denied the existence of ideal forms in this world, but Plato never saw a Viking ship.”

The story of Gudrid the Far-Traveler, however, begins with a shipwreck. As The Saga of the Greenlanders tells it, Leif Eiriksson had just spent a year in Vinland as the first Norseman to set foot in the New World, and was heading home with a ship full of timber and wine grapes. He’d had fair winds all the way and had just sighted the great ice cap when one of his crewmen admonished the young captain.

“Going a bit close to the wind, aren’t you?”

“I’m watching my steering,” said Leif. “But I’m watching something else, too. Don’t you see it?”
It was a ship—or a skerry. He couldn’t tell which. The older man saw nothing until they came closer, then he, too, could see a wreck clinging to a bit of bare rock. Leif anchored close to the reef and sent his towboat over. He rescued fifteen people—to add to his crew of thirty-five—and as much of their baggage as he could fit into his already-laden ship. The wreck had been carrying house timber from Norway to the Greenland settlement; the men secured it as best they could on the rock, and the next spring Leif sent his boat out to fetch whatever could be salvaged. By then, most of the rescued fifteen had died. The only person known to have survived the journey is Gudrid.

If she had ever shared my delusions of peaceful, sunny, blue-sea sailing, surrounded by a crew of handsome men, she would have lost them abruptly on the first of her eight voyages. She knew the killing force of the sea, of weeks at the mercy of the winds, of fog that froze on the sails and rigging, when “hands blue with cold” was not a metaphor and no land, no shelter, was in sight. She knew how fragile a Viking ship was.

“You can easily sail her down if you are not doing it right,” Gunnar Marel Eggertsson, the captain of Gaia, told me. Gaia was a Viking-ship replica with the dual mission of spreading environmental awareness and arriving in America in 1991, one year before the five-hundredth anniversary of Columbus’s “discovery.” From the west coast of Norway, where the boat was built and financed by the Norwegian owner of the Viking cruise-ship line, Gaia and her diesel-powered chase boat had followed the Viking route to the Orkneys, Shetlands, and the Faroe Islands, to Iceland and Greenland, then over the ice-filled seas to Labrador and Newfoundland. In Nova Scotia, Gaia met up with two other Viking-ship replicas, Oseberg and Saga Siglar (which had been crated and shipped by common carrier across the Atlantic). The convoy then headed south, stopping for speechifying at Boston, Newport, New York, and Washington, D.C.

Sailing a ship down is one way to sink it. I had seen videotapes of Viking-ship replicas under full sail going down with all hands in the Oslo Fjord—and winched back up to try it again. (The crew bobbed to the surface in their bright survival suits and were gathered into Zodiacs.) But I had assumed the untrained crew had simply goofed. Off the coast of Spain in 1992, Gaia’s companion ships, Oseberg and Saga Siglar, sank on their way to the World Expo in Seville. The eleven crew members—all veteran Viking-ship sailors—were plucked out of the stormy sea by the crew of their modern chase boat. The replica ships were not recovered.

Gaia, Oseberg, Saga Siglar, and the later, American-made Snorri (named for Gudrid’s son) are examples of experimental archaeology, of learning by doing. They teach us how these poems, masterpieces, swift greyhounds, and temples actually worked, what this technology meant to people like Gudrid. Gaia is copied from a ship discovered on the farm of Gok-stad, beside the Oslo Fjord in southern Norway, in the 1880s. A chieftain had been buried in the ship in the year 900, a not-unusual way for a wealthy Viking to make his way to Valhalla. It’s the soil in this part of Norway that’s unusual. The burial pit was rich in blue clay, which preserved all the wood it covered. Whereas in many ship burials what’s left are lines of iron rivets in the sand, for Gokstad we have all but the ship’s high stem and stern. We have the rudder, the bailers, the gangplank, even the towboats—“rather crank” little vessels that would capsize easily if sailed, according to Arne Emil Christensen, who was curator of the Viking Ship Museum in Bygdoy, Norway, when I visited there in 1984.

Gokstad, on the other hand, “is a rather optimum compromise of speed, seaworthiness, and a fairly good capacity for men or cargo,” he told me. “You could easily put a hundred people in it for a short trip when you don’t have to sleep.”

At 761/2 feet long, Gokstad is only medium-sized, as Viking ships go. Even so, trees big enough for its keel—a single oak log almost 58 feet long—are rare in Norwegian forests today. When a replica was built in 1893, the oak for the keel had to be sent from Canada.

From the keel up to the gunwale are sixteen long oak strakes, each made up of several carefully joined boards. The strakes bow from stem to stern in an elegant curve; the boards come from trees with a slight bend, so the grain follows the curve of the boat. Although we don’t have a Viking yardstick, it seems the Vikings had the concept of the inch. Twelve of the strakes are exactly an inch thick. The waterline strake is 13/4 inches, while the strake that held the thirty-two oar holes (each with a swiveling cover to close when the ship was under sail) measures 11/4 inches. The two top strakes are very thin: 3/4 inch. The hefty gunwale is almost four by four.

This precision becomes more impressive when you realize that the Vikings had no saws. Those inch-thick strakes were split from tall oak logs with an axe. They were shaped and smoothed by axe, too—there’s a fine cartoon of it in the Bayeux Tapestry, embroidered to celebrate the Norman Conquest of England in 1066. The shipwright has his tunic hiked up and is straddling the plank, scraping it with a long, curved axe, while his fellows chop down more trees.

In the early 1960s, Christensen had made an academic study of Viking tools. Through images in manuscripts and the Bayeux Tapestry, and artifacts from excavated graves (craftsmen were often buried with their tools), he had a pretty good grasp of how the wrights put together the Gokstad ship. Except for the rivets. The strakes lap over each other, giving the technique its name, “lapstrake”; it’s the same look as the clapboard siding on a New England farmhouse. But where the housebuilder uses nails, the shipbuilder needs to nip off the nail point and bend the end against an iron plate to keep the boards from wiggling apart. This clinching step—which gives us the word “clinker-built” to describe such ships—had Christensen perplexed. The Vikings had no nippers.

One day in 1973, he was watching shipwright Sigurd Bjorkedal working on a replica ship. Bjorkedal had a good set of nippers—farrier’s tongs—but they went unused as he riveted the ship. Instead, he snapped off the nail points with the sharpened peen of his hammer, then reversed the hammer to pound the nail flat. From then on, Christensen concentrated on studying living craftsmen, as he wrote, while there is still time. “The tools are the same, so the process must be the same,” he told me.

“You start with a keel roughly T-shaped. To shape a keel, take a wedge-shaped board, make four cuts, and axe away to make a T-shape. Use the axe to make the corners smooth,” he said. Then affix the first strake. “Use a clamp looking like an enormous clothespin to keep it in place. How wide this plank is, and the angle of the next plank, governs the shape of the ship. You shape the top edge by eye from stem to stern in a proper curve. The whole time you can adjust the angles and plank widths by a pure sculptural process. Then you cut ribs.
Copyright © 2007 by Nancy Marie Brown