The Body Has a Mind of Its Own

The Body Has a Mind of Its Own

by Sandra Blakeslee and Matthew Blakeslee

A critical analysis of the interaction between the mind and the body describes how the brain maps out every part of the body and the space around it and how the brain controls the ability to sense, move, and act in the physical world.

NPR stories about The Body Has a Mind of Its Own

Authors Investigate the Body's 'Mind of Its Own'

December 21, 2007 • Your brain and body use "maps" to translate incoming sensory signals into meaningful information. Science writers Sandra and Matthew Blakeslee talk about their new book, The Body Has a Mind of Its Own, which explains "body maps" and their role in connecting the body and the brain.

Authors Investigate the Body's 'Mind of Its Own'

Excerpt: The Body Has A Mind Of Its Own 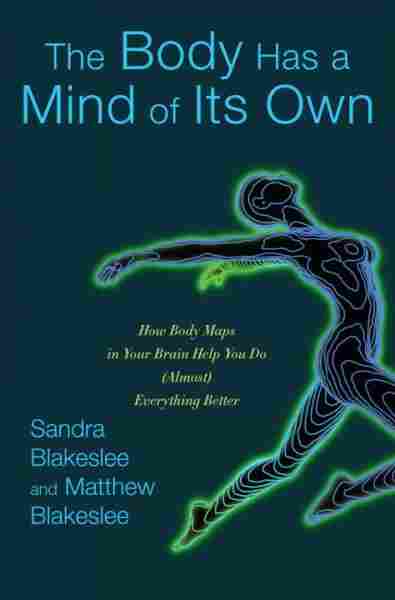 From the Introduction:
Stand up and reach out your arms, fingers extended. Wave them up, down, and sideways. Make great big circles from over your head down past your thighs. Swing each leg out as far as you can, and with the tips of your toes trace arcs on the ground around you. Swivel and tilt your head as if you were craning out your neck to butt something with your forehead or touch it with your lips and tongue. This invisible volume of space around your body out to arm’s length—what neuroscientists call peripersonal space- is part of you.

This is not a metaphor, but a recently discovered physiological fact. Through a special mapping procedure, your brain annexes this space to your limbs and body, clothing you in it like an extended, ghostly skin. The maps that encode your physical body are connected directly, immediately, personally to a map of every point in that space and also map out your potential to perform actions in that space. Your self does not end where your flesh ends, but suffuses and blends with the world, including other beings. Thus when you ride a horse with confidence and skill, your body maps and the horse’s body maps are blended in shared space. When you make love, your body maps and your lover’s body maps commingle in mutual passion.

Your brain also faithfully maps the space beyond your body when you enter it using tools. Take hold of a long stick and tap it on the ground. As far as your brain is concerned, your hand now extends to the tip of that stick. Its length has been annexed to your personal space. If you were blind, you could feel your way down the street using that stick.

From Chapter 1:
The idea that your brain maps chart not only your body but the space around your body, that these maps expand and contract to include every-day objects, and even that these maps can be shaped by the culture you grow up in, is very new to science. Research now shows that your brain is teeming with body maps—maps of your body’s surface, its musculature, its intentions, its potential for action, even a map that automatically tracks and emulates the actions and intentions of other people around you.
These body-centered maps are profoundly plastic—capable of significant reorganization in response to damage, experience, or practice. Formed early in life, they mature with experience and then continue to change, albeit less rapidly, for the rest of your life. Yet despite how central these body maps are to your being, you are only glancingly aware of your own embodiment most of the time, let alone the fact that its parameters are constantly changing and adapting, minute by minute and year after year. You may not truly appreciate the immense amount of work that goes on behind the scenes of your conscious mind that makes the experience of embodiment seem so natural. The constant activity of your body maps is so seamless, so automatic, so fluid and ingrained, that you don’t even recognize it is happening, much less that it poses an absorbing scientific puzzle that is spawning fascinating insights into human nature, health, learning, our evolutionary past and our cybernetically enhanced future.

From Chapter 6:
“Carter” was a master chef at a well-known New York restaurant when, in late 1994, a blood clot in his brain almost cost him his livelihood. Rushed to the hospital in time to receive state-of-the-art clot dissolving care, Carter was left with a potentially devastating problem: He could no longer recognize fruits and vegetables. He couldn’t tell a banana from a leek, though he could still tell a bread knife from a butcher knife and a hawk from a handsaw. He could use English fluently, and his senses were all intact. He had no discernible problems naming or thinking about any other categories of object-just fruits and veggies.
It sounds like a career killer for a chef, but Carter managed to get by. You see, his brain's network body maps still knew what to do with each item. There was nothing wrong with the body maps containing his visual-motor templates for how to manipulate objects. And there was nothing wrong with the body maps that storehoused his library of well-practiced motor sequences involved in food prep. He could still peel a carrot, slice a tomato, or dice an onion—but first he had to be told what each thing was. He would simply query the kitchen staff: “Hey, Jane, is this a cucumber? “Yeah? Thanks.” Chop chop chop.