Accessibility links
A Slave No More NPR coverage of A Slave No More: Two Men Who Escaped to Freedom : Including Their Own Narratives Of Emancipation by David W. Blight. News, author interviews, critics' picks and more.

A Slave No More

A Slave No More

Two Men Who Escaped to Freedom : Including Their Own Narratives Of Emancipation

Title
A Slave No More
Subtitle
Two Men Who Escaped to Freedom : Including Their Own Narratives Of Emancipation
Author
David W. Blight

Two slave narratives that document the experiences of runaway slaves who managed to reach the protection of Union forces are accompanied by biographies of both men that reconstruct their childhoods, escape, Civil War service, and successful later lives.

NPR stories about A Slave No More

Family Memories of Men Who Were Slaves

Family Memories of Men Who Were Slaves

December 4, 2007 • In A Slave No More, historian David W. Blight showcases the emancipation narratives of two men, one from Alabama and one from Virginia. Manuscripts written by Wallace Turnage and John Washington, and genealogical information compiled by Blight, combine to tell the stories of their lives as slaves and their harrowing flights to freedom.

Excerpt: A Slave No More 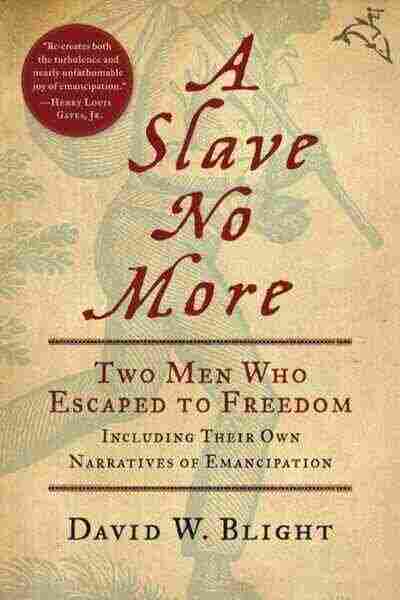 Chapter One
The Rappahannock River


Day after day the slaves came into camps and everywhere the “Stars and Stripes” waved they seemed to know freedom had dawned to the slave.
—John Washington, 1873, remembering August 1862


John M. Washington was born a slave on May 20, 1838, in Fredericksburg, Virginia. Washington begins his narrative with the wry comment that he “never had the pleasure of knowing” his mother’s owner, Thomas R. Ware, Sr., who died before John was born. And he supposes “It might have been a doubtful pleasure.” So far as can be determined, Washington also never knew his father, though we can assume he was white. As an autobiographer reconstructing his own youthful identity, Washington says revealingly: “I see myself a small light haired boy (very often passing easily for a white boy).”1

With these words Washington recollects the complicated story of so many American slaves—mixed racial heritage. The offspring of sexual unions between black women and their white male owners or pursuers suffered a legacy of confusion, shame, and abuse, but they also occasionally benefited from economic and social advantages, especially in towns and cities. Washington was one of more than 400,000 out of four million American slaves by 1860 who were officially categorized as “mulatto” or other terminology to distinguish a person of some white parentage. From 1830 to the Civil War, the state of Virginia especially had gone to great effort, although unsuccessfully in practical terms, to legally establish a color line marking who was white and who was not.2 White friends, and perhaps relatives, aided John’s education and opportunities early in his life. But in Fredericksburg and elsewhere, due to his mother’s status and color, he was considered a chattel slave until the war came.

Exactly who Washington’s father was, and how John got his middle initial and last name, have been impossible to trace. A John M. Washington, a distant cousin of President George Washington, lived in Fredericksburg, went to West Point in the 1810s, became an artillery officer, and died in a shipwreck in 1853. But no evidence exists for his patrimony of John. Ware had four sons by 1838, ages twenty-six, twenty-four, twenty, and eighteen. Any of them could have been Washington’s father, although only the two younger ones, John and William, seem to have been residents of Fredericksburg at the time.3

Washington’s story is much clearer on his mother’s side. Women determined, protected, and supported John’s life chances. His maternal grandmother was a slave named Molly who was born in the late 1790s and owned by Thomas Ware. Molly, called “my Negro woman,” is acknowledged for her “faithful service” in Ware’s 1820 will, in which he bequeathed her and her children (valued at $600) to his wife, Catherine (who would eventually be John’s owner). By 1825 Ware’s estate inventory lists Molly and four children; John’s mother, Sarah, was the oldest at age eight. Molly would have another four children by the 1830s. In June of 1829 this strong-willed mother misbehaved (perhaps running away) in such a manner that Catherine Ware arranged with a punishment house to execute a “warrant against Molly and for whipping her by contract $1.34.”4 Perhaps Molly’s defiance was sparked because her sister, Alice, had just been sold away for $350.

We can only imagine the sorrow and scars in Molly’s psyche, a woman whose life was spent nursing white children as well as her own and serving the extended Ware family. But she would live to join her grandson on their flight to freedom in 1862. She died a free woman near her daughter, grandson, and great grandchildren. Whether she departed as a sad or a joyful matriarch, John Washington does not tell us. His silence about Molly may reflect that he was telling only his own heroic story, which did not allow for his grandmother’s saga, but it could also represent a part of his family history he was not prepared to expose.

Sarah Tucker, John’s mother, was likely born in January 1817. Who the men fathering all these children were remains a researcher’s mystery. Sarah probably also had a white father; she is described in various documents as being “bright mulatto” and short in height.5 Ware did not own any men who could have been either Sarah’s or John’s father. When Sarah gave birth to John in 1838, she was a twenty-one-year-old who had somehow learned to read and write, a less unusual accomplishment for urban slaves in small households than for plantation slaves.

In 1832, when Sarah was a teenager, Catherine Ware married Francis Whitaker Taliaferro, a plantation and slave owner with four grown children. The Taliaferros had their own slaves and hired others when they needed extra hands, as was the common practice; in 1836 Mr. Taliaferro advertised for “ten able-bodied men for the remainder of the year,” offering twelve dollars per month to their owners. The Taliaferros also hired out their own slaves on occasion, including Sarah. With John in tow, Sarah was hired out in 1840 to a farm thirty-seven miles west of Fredericksburg, owned by Richard L. Brown of Orange County.6

Washington yearningly describes his eight years in the countryside in the idyllic opening section of his narrative. His mother must have worked as a house slave because he played “mostly with white children.” He spent summers “wading the brooks” and climbing ridges from which he could see the “Blue Ridge Mountains” and a “moss covered wheel . . . throwing the water off in beautiful showers” at a mill on the Rapidan River. Among these pleasant memories is his going to a circus at Orange Court House, where he got lost from his family, and his attending services with his mother at the “Mount Pisgah” Baptist church, a large structure “with gallerys around for colored people to sit in.” John loved the “tall pines” that surrounded the church and remembers the “cakes, candy and fruits” sold under the great trees on Sundays. He relished his recollections of “corn shuckings,” a “hog killing,” and a joyous Christmas celebration. He also remembered his mother teaching him the child’s bedtime prayer, “Now I lay me down to sleep, I pray the Lord my soul to keep,” and the “Lord’s Prayer.” And perhaps most important, by the time he was eight, Sarah had taught him the alphabet.7

Equipped with literacy, if not with good spelling or grammar, Washington brilliantly uses all of these images of nature as backdrop for his descent into the hell of slavery. He employs natural beauty as a metaphor for freedom and a reminder of the terror of bondage, knowing that the glories of nature can both inspire the soul and mock human sadness. He worries at one point that his “minute events” would not “interest” his reader, and then he quickly moves his story forward.

These early years were both easy and painful for Washington to remember. He likely had no memory, though, of his mother’s attempt to run away when he was only three. On February 19, 1841, Thomas R. Ware, Jr., advertised in a Fredericksburg newspaper for a “negro woman sarah.” She is described as “about 20 years of age, a bright Mulatto, and rather under the common size.” Clearly she had fled some distance and for some length of time, because the notice offered a twenty-dollar reward if Sarah was captured “more than 20 miles from this place.”8 No evidence survives to indicate how and when Sarah was captured or why she fled. Perhaps she simply took flight from the pressures of daily life for a while. Perhaps she was a young, disgruntled woman “lying out,” as the saying went, absconding to the woods or another farm to be with her lover. But she was surely a woman of unusual intelligence and resourcefulness if she managed to escape and remain on her own for a period of time.

A recent study of runaway slaves in the antebellum South found that slaveholders’ advertisements often described a slave as “proud, artful, cunning . . . shrewd” or “very smart.” Historians Loren Schweninger and John Hope Franklin conclude that the typical runaway exhibited “self-confidence, self-assurance, self-possession . . . self-reliance.” It was rare for women to run away, especially those with small children. In the database produced by Schweninger and Franklin, based on extant runaway advertisements in five Southern states, 81 percent of all runaways were male. Of the 195 Virginia runaways from 1838 to 1860, of which Sarah would be one, only seventeen (9 percent) were female.9

Sarah likely never told her son the story of her flight, although he eventually might have learned of it from others. That Washington had a mother who herself had been a runaway provided a deep layer of silent inheritance, embedded in his spirit if not in his memory. No doubt, both John’s mother and grandmother kept parts of their own physical, emotional, and sexual stories to themselves. Perhaps their experience with white men and with rearing children in the desperately insecure world of slavery left them much like Harriet Jacobs, the author of one of the most important slave narratives. “The secrets of slavery are concealed,” wrote Jacobs, “like those of the Inquisition. My master was, to my knowledge, the father of eleven slaves. But did the mothers dare tell who was the father of their children? Did other slaves dare to allude to it, except in whispers among themselves? No indeed!”10