The Airmen and the Headhunters

The Airmen and the Headhunters

A True Story of Lost Soldiers, Heroic Tribesmen and the Unlikeliest Rescue of World War II

November 1944: Army airmen set out in a B-24 bomber on what should have been an easy mission off the Borneo coast. Instead they found themselves facing a Japanese fleet—and were shot down. When they cut themselves loose from their parachutes, they were scattered across the island's mountainous interior. Then a group of loincloth-wearing natives silently materialized out of the jungle. Would these Dayak tribesmen turn the starving airmen over to the Japanese occupiers? Or would the Dayaks risk vicious reprisals to get the airmen safely home? The tribal leaders' unprecedented decision led to a desperate game of hide-and-seek, and, ultimately, the return of a long-renounced ritual: head-hunting. This survival story features a bamboo airstrip built on a rice paddy, a mad British major, and a blowpipe-wielding army that helped destroy one of the last Japanese strongholds.—From publisher description.Describes how the American Army crew of a B-24 bomber, shot down over Japanese-occupied Borneo in November 1944, were rescued by native Dayak tribesmen, one-time headhunters who returned to their long-renounced ritual in order to protect the airmen.

NPR stories about The Airmen and the Headhunters

A WWII Tale of 'The Airmen and the Headhunters'

November 27, 2007 • At the close of World War II, a U.S. plane was shot down over the jungles of Borneo. For seven months, survivors lived among a headhunting tribe, hiding from the Japanese. Author Judith Heimann tells their story.

Judith Heimann Reads from the Book

November 10, 2007 • In late 1944, seven U.S. Army airmen crashed on the island of Borneo and were rescued by a native jungle tribe. In her new book, author Judith Heimann recounts the story of their protection by natives as Japanese hunt them on the mountainous island.

Excerpt: The Airmen And The Headhunters 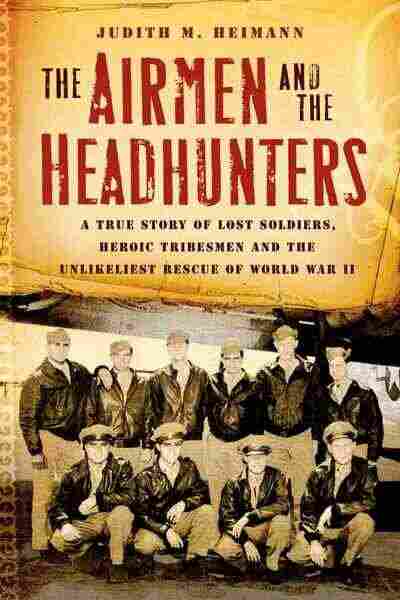 About twelve thirty midday on November 16, 1944, District Officer William Makahanap looked up from his draft report on the expected rice production in his East Borneo district of Mentarang and realized that for the past few minutes he had been hearing a whining noise. The overhead fan in his old office back in the Celebes used to sound like that, but here in the little settlement of Long Berang there was no electricity to run a fan. The whine could have been from mosquitoes, but it was the wrong time of day for their assault. Such a loud noise was unusual in the quiet midday period, when able-bodied Dayaks (the general term for the various tribes of inland Borneo) were away in the rice fields or the jungle, and nearly everybody else was dozing. Even the schoolchildren, curled up on mats in the schoolroom down the road, would be taking a nap while the day was hottest.

The whine grew louder and Makahanap finally recognized what it was: the engines of a big airplane. Then, above the engine noise, he heard people yelling out in the fields. What could be disturbing the Dayaks? He stepped outside and heard them shouting that “the big thing in the sky” was “breaking apart” and “going to fall to the ground.”

Standing on his office steps, he squinted up into the shimmering sky above the jungle at the edge of the little settlement. He could see that the plane, flashing in and out of the cloud cover, had four engines and big wings, but he did not know enough about aircraft to recognize a B-24. Nor could he tell whose plane it was, Allied or Japanese. What he did realize was that the Dayaks were right. It was about to break apart and fall out of the sky.

Standing there on his front step, blinking at the bright sky, Makahanap’s first reaction was probably annoyance at being interrupted. But his next would have been anxiety. In his experience of the past three years, the arrival of something new was rarely a blessing for himself, his family or his district.

He could see, though, that the Dayaks were filled with wonder. None of them had ever seen anything like this thing in the sky. He could no longer see or hear it. Had it gone down somewhere behind the mountains to the northeast? What had happened to it? Where was it now? Above all, was it Japanese or Allied?


November 16, 1944, had begun as a routine Thursday for pilot 2nd Lt. Tom Coberly, USAAF, and the ten men of the crew of his B-24 (a four-engine bomber also known as a “Liberator”). They had been awakened shortly after two in the morning and given breakfast: a choice of hot or cold cereal, along with powdered eggs scrambled and Spam fried and liberally doused with tomato ketchup. They washed it down with tall glasses of milk and orange juice and enough coffee to wake them up.
It was the coolest, best time of day at their air base on Morotai, a small island of the Moluccas in the Netherlands East Indies. Just south of the Philippines and hundreds of miles due east of Borneo, Morotai was built on a foundation of coral and was relatively bare. Much of its scrub plant life had been cleared away to make the coconut plantation thatwas now an airfield. There was nothing to do there but wait to fly out.

Lieutenant Coberly’s crew, simply called Coberly’s, had been on Morotai less than a month. Their Twenty-third Squadron belonged to the Bomber Barons, the Fifth Bomb Group that was an arm of the tiny Thirteenth Air Force (sometimes called the Jungle Air Force) of the USAAF whose missions were to retake the Japanese-occupied Philippine Islands and cut off Japan’s Pacific oil supplies.

In response to the prewar U.S.-led oil embargo against Japan after the latter took Indochina, the Japanese military had launched a brilliant offensive in 1941–1942, starting with the December raid on Pearl Harbor that had destroyed an unprepared American sea-and-air armada. Next, Japan’s troops had taken over the American and European holdings in the Pacific, virtually without a struggle, while America devoted most of its energies to beating back Hitler’s armies in Europe and North Africa. Japan hoped its new empire—which it called the Greater East Asia Co-Prosperity Sphere—would make it self-sufficient in the oil, tin and rubber needed for its growing industrial economy. But the effort to secure and run such a far-flung empire was making Japan the victim of its own success.

Its forces were spread so thinly across an area that ran from China to the South Seas that it risked losing all or part of its new colonies if the natives rebelled or the Allies invaded. Lacking the manpower to match its territorial ambitions, Japan relied in part on the fear inspired by the harshness of its occupation to keep the subject peoples in line.

Japan really needed Borneo’s oil: In 1943 and 1944, it counted on Borneo for 40 percent of its fuel oil and 25 to 30 percent of its crude and heavy oils. By 1944, cutting off these Japanese oil supplies had become a major goal of the Thirteenth Air Force’s bomber arm.

Liberator squadrons of the Bomber Barons had had increasing success bombing Japanese shipping, including the ships bringing oil home from Borneo. The Bomber Barons were not just attacking transport vessels; in October 1944, some squadrons had taken part in the massive naval battle of Leyte Gulf, in which the Japanese navy had lost close to a hundred ships, including three battleships, four carriers, six heavy and four light cruisers and eleven destroyers.

With this naval victory, the Allies began to feel that a corner had been turned. From now on, the Allies reasoned, not only would the Japanese have more trouble protecting their shipping, but they would be unable to prevent the tropical islands from being liberated by the Allies and serving as stepping stones for the planned invasion of Japan itself. Moreover, the Imperial Navy now lacked enough carrier platforms for the fighter planes needed to protect the Japanese homeland from air attack.

Today, Coberly’s squadron had been scheduled to attack a Japanese-held airfield in the central Philippines. But the previous night, after supper and a briefing on the morning’s raid, the men were watching an outdoor movie when they were summoned back to the briefing tent. Their mission had changed.

They were now told to prepare for an attack against a Japanese heavy cruiser. There might also be an aircraft carrier, which had been seen “lazing along like a fat duck in Brunei Bay.” Their orders were to hit the largest ship. Coberly’s plane was quickly reloaded with weapons appropriate to its new mission: five one-thousand-pound, armor-piercing bombs.

Before the predawn breakfast that Thursday, flight engineer/gunner Cpl. Jim Knoch and armor gunner Cpl. John Nelson decided to launder their khaki uniforms using a new technique. They tied their dirty clothes to a long rope and threw them into the dark surf at the edge of the airfield, so that the ebb and flow of the waves would scrub them clean by the time they returned from their mission. Like all such busy work before a combat flight, this helped the men avoid thinking about what was to come. Some men would play a little mind game, telling themselves, “Don’t worry, you’re dead already; you died last week,” to steel themselves for what might happen this time.

The original crew of Coberly’s had been together since June 1944, when these airmen were assigned to phase training at March Field, near Riverside, California, not far from Los Angeles. Perhaps the most striking thing about Coberly’s was their youth. Tom Coberly himself, at twenty-two, was the eldest on board.

Nineteen-year-old Cpl. Jim Knoch was the leader of the plane’s seven enlisted men, because of his position as flight engineer. Jim was tall, slim but powerfully built, with dark eyes, a permanent tan and dark blond curly hair. Though he liked to laugh and could play the clown, he had an imposing presence. He had been raised in Sacramento, the son of a mechanic with the Otis Elevator Company. His father hated bureaucracy and did not like being told what to do or how to do it. An only child, Jim had inherited his father’s skills and prejudices. At eighteen, he had become a crew chief, directing the grown men at McClellan Air Force Base outside Sacramento who were building the B-24, and he knew the plane intimately. Though he was one of only two in the crew from a blue-collar family, he had the respect of everyone in Coberly’s for his skill as an engineer and for his spunk.

Jim led Coberly’s into practical jokes and minor acts of rebellion against authority. He had a mischievous sense of humor and did not mind flouting the rules. He had a natural gift for making things work and liked not only to repair but to prevent mechanical problems. Crewmates remembered one terrifying occasion when they had been on a training flight in a B-24 about twelve thousand feet above downtown Los Angeles. Jim was practicing pumping fuel from the bomb-bay tanks to the main-wing tanks when, without warning, all four engines quit. The plane sank like a stone to about three thousand feet before the pilot managed to get the engines restarted. The others would never forget how Jim had calmly continued the refueling until it was done.
Copyright © 2007 by Judith M. Heimann