A Real Guy's Guide to Chopping Ten Strokes off Your Score

by John Daly and Glen Waggoner

NPR stories about Golf My Own Damn Way

John Daly, Golfing (and Living) His Own Way

November 15, 2007 • Bad-boy golfer John Daly doesn't have an exercise regimen. He begins his day with a Diet Coke and a cigarette, and he has battled addictions to alcohol and gambling. But he sure can play. His new book is Golf My Own Damn Way.

John Daly, Golfing (and Living) His Own Way

Excerpt: Golf My Own Damn Way 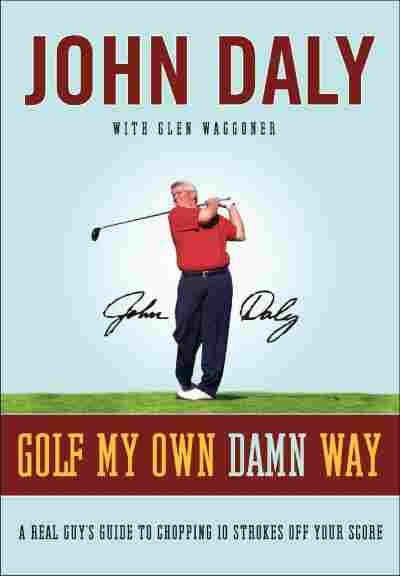 A Real Guy's Guide to Chopping Ten Strokes Off Your Score

Get Ready to Play

You've got a 2:00 tee time. It's coming up on 1:30. You and your playing partners have just finished a nice lunch in the clubhouse. You're all relaxed, and you're all looking forward to your round, but everybody agrees you've got just enough time for one more beer before you tee 'em high and let 'em fly.

You read them right: I said No, as in "No One for the Road."

"What's that he said? John Daly telling us not to have another round of beers? What's wrong with this picture? Has he given up beer or something?"

The answers to your four questions are You Heard Me Right, Yes, Nothing, and Hell, No.

Look, the Lion hasn't gone and changed his spots or cut off his mane or anything. It's just that we're supposed to be talking here about the best way to knock 5 to 10 strokes off your score so you can enjoy the game of golf a bunch more, not how to drink a bunch more beer. I'm guessing we both know how to do that. So trust me and follow my thinking here.

See, I think that the best way to knock a stroke or two—maybe more— off your score on the first four holes alone is to spend the 30 minutes before your tee time down at the range getting ready to play instead of back up at the clubhouse or over in your cart knocking down beers.

Help me out here. Think back on the last five rounds you played with no time spent at the range. (Most amateurs I know, that would be the last five rounds they played.) You know, times you were still in the parking lot tying your shoes when the starter called out for the next group—you and your buddies—to stand by near the first tee. Or the times you were hustling over from the clubhouse at five minutes before 2:00.

Don't pretend you don't know what I'm talking about. Traffic was heavy, or you had some damned-fool "honey-do" chore to finish at home, or some other good excuse. Or you just had to have you that wedge of pie and coffee— or beer—in the clubhouse.

Whatever, you got to the first tee with only just enough time to swing your driver as hard as you could about ten times to "loosen up." (You're doggone lucky you didn't pop a pucker string or something.)

Next thing you know, you're up on the tee box, telling yourself to relax and swing nice and easy. You stare long and hard down the middle of the fairway, trying to visualize your shot like all the golf magazines tell you to do. Then you give the Big Dog a pro-quality waggle, suck in a deep breath, and take a mighty rip at the ball.

Duck-hook, OB. First-hole mulligan? Sure, you betcha. Next, on what the cranky old USGA says is your third shot, you hit a dying quail about 200 yards into the thick gunch on the far right. You go down and find it (if you're lucky) and hack it out about 50 yards. Next you skull a worm-burner to about 75 yards short of the green, smooth a soft wedge to about 20 feet ("Great shot, partner!"), and 3-putt because you're still so pissed off about that fiasco off the tee.

Triple bogey, with your mulligan.

Or a big fat 9—Snowman with a Top Hat—if some asshole in your foursome insists that you play by the Rules of Golf.

Shit, either way your day is done, scoring-wise, before you can even make it over to number 2 tee box.

Sound familiar? I bet it does. Maybe it's not that bad all the time. (If it's worse, don't tell me.) But when it is, I don't need to tell you that it puts you into a hole you never crawl out of. More likely, you dig yourself even deeper over the next three holes.

So let's go back now, and you tote up your scores on the first four holes of the last five rounds without any time at all, or hardly any, at the range before teeing off. Go ahead. I'll wait.

Just kidding. I don't really expect you to remember your exact scores on the first four holes you played yesterday, much less the last five rounds. But the point I want to get across here is that you almost always score worse on those first few holes when you spend no time at the range than you do when you give yourself a little time—say, 30 minutes—to get ready to play.

Not to be disrespectful or anything, but you better golfers already know this. There's no single-digit golfer on the planet who'd even think of walking out to the first tee cold, with no prep time whatsoever. A guy that good, he'd rather stay home and mow the yard rather than go tee off without getting ready to play. And if for some reason he did, he'd know what to expect: not coming close to playing to his handicap that day because he screwed up those first few holes.

My experience, based on playing in about a million pro-ams and at least that many rounds with friends back at my course in Arkansas, is that the higher a guy's handicap, the more likely he is to shortchange himself on prep time before he tees off, and the bigger chance he has to shoot himself in the foot in the first few holes.