When the bodies of two women, raped and strangled, turn up on the first anniversary of the Japanese surrender in American-occupied Tokyo, Detective Minami of the Tokyo Metropolitan Police, haunted by the atrocities of war, searches for the killer.

November 6, 2007 • Some thrillers hit you over the head. But David Peace's latest post-war novel, Tokyo Year Zero, is more subtle. Peace has written half a dozen books that were well-received in England. His first American release is full of sound effects. 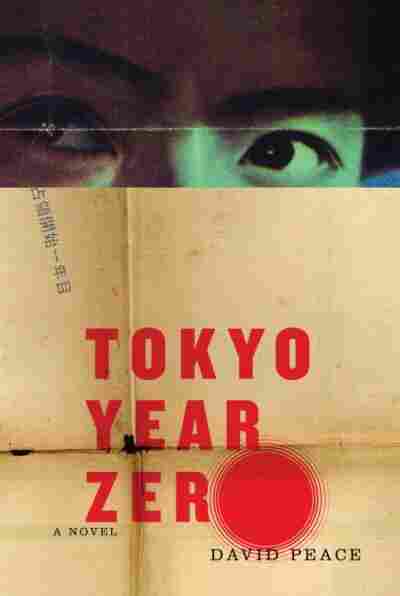 The fifteenth day of the eighth month of the twentieth year of Showa
Tokyo, 90°, fine

I open my eyes. From dreams that are not my own. I sit up in my chair at my desk. Dreams I do not want. My collar is wet and my whole suit damp. My hair itches. My skin itches–

Detective Nishi is taking down the blackout curtains, bright warm shafts of dawn and dust filling the office as the sun rises up beyond the tape-crossed windows–

‘Did you just say something?’ I ask Nishi–

I stare up at the ceiling. Nothing moves in the bright light. The fans have stopped. No electricity. The telephones silent. No lines. The toilets blocked. No water. Nothing–

‘Kumagaya was hit during the night,’ says Nishi. ‘There are reports of gunfire from the Palace…’

I take out my handkerchief. It is old and it is dirty. I wipe my neck again. Then I wipe my face. Now I check my pockets–

Nishi holds up a small box and asks, ‘You looking for these?’

I snatch the box of Muronal out of his hands. I check the contents. Enough. I stuff the box back into my jacket pocket–

The sirens and the warnings all through the night; Tokyo hot and dark, hidden and cowed; night and day, rumours of new weapons, fears of new bombs; first Hiroshima, then Nagasaki, next is Tokyo…

Night and day, this is why I take these pills…

This is what I tell myself, night and day…

‘They were on the floor,’ says Nishi–

Nishi shakes his head. I curse him. There are five more days until the next special ration. Five more days…

Detective Fujita storms into the room. Detective Fujita has a Police Bulletin in his hand. Fujita says, ‘Sorry, more bad news…
’
He tosses the bulletin onto my desk. Nishi picks it up–

Nishi is young. Nishi is keen. Too young…

‘It’s from the Shinagawa police station,’ he says, and reads: ‘Body discovered in suspicious circumstances at the Women’s Dormitory Building of the Dai-Ichi Naval Clothing Department–’

‘Just a moment,’ I tell him. ‘Surely anything to do with the Naval Clothing Department falls under the jurisdiction of the Kempeitai? This is a case for the military police, not civilian…’

‘I know,’ says Fujita. ‘But Shinagawa are requesting Murder Squad detectives. Like I say, I’m really sorry I pulled it…’

No one wants a case. Not today. Not now…

I get up from my desk. I grab my hat–

‘Come on,’ I tell Fujita and Nishi. ‘We’ll find someone else. We’ll dump the case. Just watch me…’

I go out of our room and down the main hallway of the First Investigative Division of the Tokyo Metropolitan Police Department; down Police Arcade, room to room, office to office, door to door–

Door to door. No one. Office to office. No one. Room to room. No one. Everyone evacuated or absent–

No one wants a case. Not today…

Just Fujita, Nishi and me now–

I stand in the corridor. I ask Nishi, ‘Where’s Chief Kita?’

‘All chiefs were summoned to a meeting at 7 a.m….’

I take out my pocket watch. It’s already past eight–

‘There’s to be an Imperial broadcast at noon today…’

I eat acorns. I eat leaves. I eat weeds…

‘A broadcast about what?’ I ask–

‘I don’t know, but the entire nation has been instructed to find a radio so that they can listen to it…’

‘Today is the day then,’ I say. ‘People return to your homes! Kill your children! Kill your wives! Then kill yourself!’

Too young. Too keen…

‘If we’re going to go,’ interrupts Fujita, ‘let’s at least go via Shimbashi and get some cigarettes…’

‘Let’s take the Yamate Line round to Shinagawa,’ he says. ‘Take our time, walk slowly and hope we’re too late…’

‘If the Yamate Line is even running,’ I remind him–

Detective Fujita, Nishi and I walk down the stairs, through the doors, and leave Headquarters by the back way, on the side of the building that faces away from the grounds of the Imperial Palace–

That looks out on the ruins of the Ministry of Justice.

The shortest route to Shimbashi from Sakuradamon is through the Hibiya Park, through this park that is now no park–

‘Even if we are routed in battle,’ Nishi is saying, ‘the mountains and the rivers remain. The people remain…’

Plinths without statues, posts with no gates…

‘The hero Kusunoki pledged to live and die seven times in order to save Japan,’ he states. ‘We can do no less…’

No foliage. No bushes. No grass now…

‘We must fight on,’ he urges. ‘Even if we have to chew the grass, eat the earth and live in the fields…’

Just stark black winter trees…
‘With our broken swords and our exhausted arrows,’ I say. ‘Our hearts burnt by fire, eaten by tears…’

In the white summer heat…

Nishi in one ear and now the harsh noise of martial music from a sound-truck in the other as we leave the park that is no park, down streets that are no streets, past buildings that are no buildings–

‘Oh so bravely, off to Victory / Insofar as we have vowed and left our land behind…’

Buildings of which nothing remains but their front walls; now only sky where their windows and their ceilings should be–

The shattered brick, the lone chimneys and the metal safes that crashed down through the floors as these buildings went up in flames, night after night–

Night after night, from the eleventh month of last year, siren after siren, bomb after bomb–

‘Helmets emblazoned with the Rising Sun / And, stroking the mane of our horses…’

‘Who knows what tomorrow will bring–life?’

Only the survivors now–

‘Or death in battle?’

Hiding under the rubble, living among the ruins, three or four families to a shack of rusted iron and salvaged wood, or in the railway or the subway stations–

‘We must fight on,’ repeats Detective Nishi. ‘For if we do not fight on, the Emperor himself will be executed and the women of Japan will be subjected to methodical rape so that the next Japanese will not be Japanese…’

Beneath telegraph poles that stand as grave markers, down these streets that are no streets, we walk as Nishi rants on–

‘In the mountains of Nagano, we shall make our final stand; on Maizuruyama, on Minakamiyama, on Zozan!’

There are people on these streets that are no streets now, people that are no people; exhausted ghosts in early morning queues, bitter-enders waiting for lunches outside hodge-podge dining halls in
old movie theatres, their posters replaced by slogans–

‘We Are All Soldiers on the Home Front …’

The sound-truck has gone and with it that song we have heard every day for the last seven years, ‘Roei no Uta’–

‘Every man under sixty-five, every woman under forty-five will take up a bamboo spear and march off…

‘To defend our beloved Japan…’

I stop in the middle of this street that is no street and I grab Nishi by the collar of his civil defence uniform and I push him up against a scorched wall, a scorched wall on which is written–

‘Let Us All Help One Another with Smiling Faces…’

‘Go back to Headquarters, detective,’ I tell him–

He blinks, open mouthed, and now he nods–

I pull him back from the black wall–

‘I want to make sure one of us, at least, is able to hear this Imperial broadcast,’ I tell him. ‘You can then report what was said, if Fujita and I are unable to hear it…’

I let go of his collar–

‘Dismissed,’ I shout now and Nishi stands to attention, salutes and then he bows–

‘Nishi is very young,’ I tell him.

‘Yes,’ I say. ‘But I don’t think he’d be too keen on our old friend Matsuda Giichi…’

In this city that is no city–