After sixty years of living in the upstate New York town of Thomaston, Louis Charles and his wife of forty years, Sarah, prepare for a trip to Italy to visit Louis' childhood friend, an artist who had fled his hometown many years earlier.

NPR stories about Bridge of Sighs

October 12, 2007 • Richard Russo's novel, Bridge of Sighs, is a story about unexceptional people in an unexceptional upstate New York town. Maureen Corrigan says the novel is pound-for-pound the best new fiction on shelves today. Russo won the Pulitzer Prize for his novel Empire Falls, a story about the relationships between people in a small town in Maine.

October 1, 2007 • Pulitzer Prize-winning author Richard Russo knows small towns well. He writes about them and grew up in one. His new novel, Bridge of Sighs, captures the dilemma of leaving — or staying in — a small town like his own. 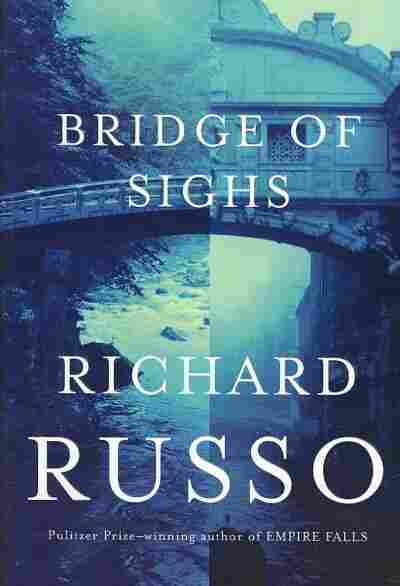 My name is Louis Charles Lynch. I am sixty years old, and for nearly forty of those years I’ve been a devoted if not terribly exciting husband to the same lovely woman, as well as a doting father to Owen, our son, who is now himself a grown, married man. He and his wife are childless and likely, alas, to so remain. Earlier in my marriage it appeared as if we’d be blessed with a daughter, but a car accident when my wife was in her fourth month caused her to miscarry. That was a long time ago, but Sarah still thinks about the child and so do I.

Perhaps what’s most remarkable about my life is that I’ve lived all of it in the same small town in upstate New York, a thing unheard of in this day and age. My wife’s parents moved here when she was a little girl, so she has few memories before Thomaston, and her situation isn’t much different from my own. Some people, upon learning how we’ve lived our lives, are unable to conceal their chagrin on our behalf, that our lives should be so limited, as if experience so geographically circumscribed could be neither rich nor satisfying. When I assure them that it has been both, their smiles suggest we’ve been blessed with self-deception by way of compensation for all we’ve missed. I remind such people that until fairly recently the vast majority of humans have been circumscribed in precisely this manner and that lives can also be constrained by a great many other things: want, illness, ignorance, loneliness and lack of faith, to name just a few. But it’s probably true my wife would have traveled more if she’d married someone else, and my unwillingness to become the vagabond is just one of the ways I’ve been, as I said, an unexciting if loyal and unwavering companion. She’s heard all of my arguments, philosophical and other, for staying put; in her mind they all amount to little more than my natural inclination, inertia rationalized. She may be right. That said, I don’t think Sarah has been unhappy in our marriage. She loves me and our son and, I think, our life. She assured me of this not long ago when it appeared she might lose her own and, sick with worry, I asked if she’d regretted the good simple life we’ve made together.

Though our pace, never breakneck, has slowed recently, I like to think that the real reason we’ve not seen more of the world is that Thomaston itself has always been both luxuriant and demanding. In addition to the corner store we inherited from my parents, we now own and operate two other convenience stores. My son wryly refers to these as “the Lynch Empire,” and while the demands of running them are not overwhelming, they are relentless and time-consuming. Each is like a pet that refuses to be housebroken and resents being left alone. In addition to these demands on my time, I also serve on a great many committees, so many, in fact, that late in life I’ve acquired a nickname, Mr. Mayor—a tribute to my civic-mindedness that contains, I’m well aware, an element of gentle derision. Sarah believes that people take advantage of my good nature, my willingness to listen carefully to everyone, even after it’s become clear they have nothing to say. She worries that I often return home late in the evening and then not in the best of humors, a natural result of the fact that the civic pie we divide grows smaller each year, even as our community’s needs continue dutifully to grow. Every year the arguments over how we spend our diminished and diminishing assets become less civil, less respectful, and my wife believes it’s high time for younger men to shoulder their fair share of the responsibility, not to mention the attendant abuse. In principle I heartily agree, though in practice I no sooner resign from one committee than I’m persuaded to join another. And Sarah’s no one to talk, serving as she has, until her recent illness, on far too many boards and development committees.

Be all that as it may, the well-established rhythms of our adult lives will soon be interrupted most violently, for despite my inclination to stay put, we are soon to travel, my wife and I. I have but one month to prepare for this momentous change and mentally adjust to the loss of my precious routines—my rounds, I call them—that take me into every part of town on an almost daily basis. Too little time, I maintain, for a man so set in his ways, but I have agreed to all of it. I’ve had my passport photo taken, filled out my application at the post office and mailed all the necessary documents to the State Department, all under the watchful eye of my wife and son, who seem to believe that my lifelong aversion to travel might actually cause me to sabotage our plans. Owen in particular sustains this unkind view of his father, as if I’d deny his mother anything, after all she’s been through. “Watch him, Ma,” he advises, narrowing his eyes at me in what I hope is mock suspicion. “You know how he is.”

Italy. We will go to Italy. Rome, then Florence, and finally Venice.

No sooner did I agree than we were marooned in a sea of guidebooks that my wife now studies like a madwoman. “Aqua alta,” she said last night after she’d finally turned off the light, her voice near and intimate in the dark. She found my hand and gave it a squeeze under the covers. “In Venice there’s something called aqua alta. High water.”

“If you’d do some reading, you’d know that streets in Italy are called calles.”

“When the aqua alta is bad, all of St. Mark’s is underwater.”

She sighed loudly. “St. Mark’s isn’t a church. It’s a plaza. The plaza of San Marco. Do you need me to explain what a plaza is?”

Actually, I’d known that calles were streets and hadn’t really needed an explanation of aqua alta either. But my militant ignorance on the subject of all things Italian has quickly become a game between us, one we both enjoy.

“We may need boots,” my wife ventured.

“If you don’t have the right boots, they sound a siren?”

She gave me a swift kick under the covers. “To warn you. That the high water’s coming. So you’ll wear your boots.”

“Maybe I’ll just sit in the car and wait for the water to recede.”

Another kick. “No cars.”

“No cars,” I repeated. “Got it. Calles where the streets should be. No cars in the calles, though, not one.”

“We haven’t heard back from Bobby.”

Our old friend. Our third musketeer from senior year of high school. Long, long gone from us. She didn’t have to tell me we hadn’t heard back. “Maybe he’s moved. Maybe he doesn’t live in Venice anymore.”

“Maybe he’d rather not see us.”

I could feel my wife shrug in the dark, and feel our sense of play running aground. “How’s your story coming?”

“Good,” I told her. “I’ve been born already. A chronological approach is best, don’t you think?”

“I thought you were writing a history of Thomaston,” she said.

“How about me?” she said, taking my hand again.

“Not yet. I’m still just a baby. You’re still downstate. Out of sight, out of mind.”

“You could lie. You could say I lived next door. That way we’d always be together.” Playful again, now.

“I’ll think about it,” I said. “But the people who actually lived next door are the problem. I’d have to evict them.”

“It is tempting to lie, though,” I admitted.

“About what?” She yawned, and I knew she’d be asleep and snoring peacefully in another minute or two.

“Promise me you won’t let it become an obsession.”

But I’m not the only reason my wife is on guard against obsession. Her father, who taught English at the high school, spent his summers writing a novel that by the end had swollen to more than a thousand single-spaced pages and still with no end in sight. I myself am drawn to shorter narratives. Of late, obituaries. It troubles my wife that I read them with my morning coffee, going directly to that section of the newspaper, but turning sixty does that, does it not? Death isn’t an obsession, just a reality. Last month I read of the death—in yet another car accident—of a man whose life had been intertwined with mine since we were boys. I slipped it into the envelope that contained my wife’s letter, the one that announced our forthcoming travels, to our old friend Bobby, who will remember him well. Obituaries, I believe, are really less about death than the odd shapes life takes, the patterns that death allows us to see. At sixty, these patterns are important.

“I’m thinking fifty pages should do it. A hundred, tops. And I’ve already got a title: The Dullest Story Ever Told.”

When she had no response to this, I glanced over and saw that her breathing had become regular, that her eyes were closed, lids fluttering.

It’s possible, of course, that Bobby might prefer not to see us, his oldest friends. Not everyone, Sarah reminds me, values the past as I do. Dwells on it, she no doubt means. Loves it. Is troubled by it. Alludes to it in conversation without appropriate transition. Had I finished my university degree, as my mother desperately wanted me to, it would have been in history, and that might have afforded me ample justification for this inclination to gaze backward. But Bobby—having fled our town, state and nation at eighteen—may have little desire to stroll down memory lane. After living all over Europe, he might well have all but forgotten those he fled. I can joke about mine being “the dullest story ever told,” but to a man like Bobby it probably isn’t so very far from the truth. I could go back over my correspondence with him, though I think I know what I’d find in it—polite acknowledgment of whatever I’ve sent him, news that someone we’d both known as boys has married, or divorced, or been arrested, or diagnosed, or died. But little beyond acknowledgment. His responses to my newsy letters will contain no requests for further information, no Do you ever hear from so-and-so anymore? Still, I’m confident Bobby would be happy to see us, that my wife and I haven’t become inconsequential to him.

Why not admit it? Of late, he has been much on my mind.