Presents the classical epic of the Napoleonic Wars and their effects on four Russian families.

NPR stories about War and Peace

October 22, 2007 • Dueling versions of one of the world's great novels have created a book-world furor. One new edition calls itself the "original version." That's drawn fire from an editor who says it's basically a rough draft — and who just published another version by a team of superstar translators. 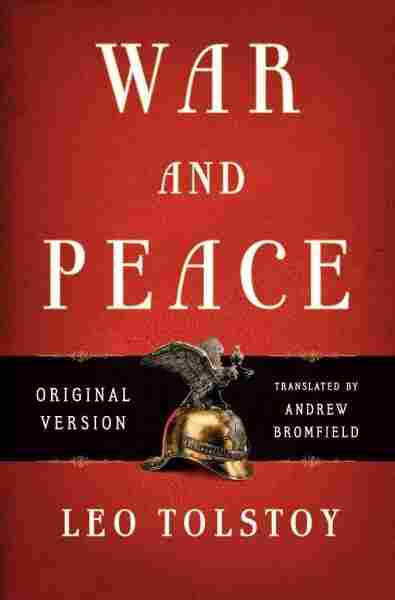 "Eh bien, mon prince, so Genoa and Lucca are now merely estates, the private estates of the Buonaparte family. Non, I warn you, if you don't say this means war, if you still defend all these vile acts, all these atrocities by an Antichrist (for I really do believe he is the Antichrist), then I no longer know you, you are no longer mon ami, you are no longer, as you put it, my devoted slave. But, anyway, how do you do, how are you? I see I am frightening you, do come and sit down and tell me what's going on." These were the words with which, in July 1805, the renowned Anna Pavlovna Scherer, lady-in-waiting and confidante of the Empress Maria Fedorovna, greeted the influential and high-ranking Prince Vasily, who was the first to arrive at her soirée. Anna Pavlovna had been coughing for several days, and had what she called the grippe (grippe then being a new word, used only by the few), and therefore had not attended at court nor even left the house. All of the notes she had sent out in the morning with a scarlet-liveried servant had contained the same message, without variation:

If, Count (or Prince), you have nothing better to do, and the prospect of an evening in the company of a poor invalid is not too alarming, then I should be delighted to see you at home between seven and ten o'clock.
Annette Scherer.

"Dieu, what a fierce attack!" replied the prince with a faint smile, not in the least perturbed by this reception as he entered, wearing his embroidered court dress-coat, with knee-breeches, low shoes and starry decorations, and a serene expression on his cunning face.

He spoke that refined French in which our grandfathers not only spoke, but also thought, and with the gently modulated, patronising intonation that was natural to a man of consequence who had grown old in society and at court. He went up to Anna Pavlovna and kissed her hand, presenting to her the bald, perfumed top of his head, which gleamed white even between the grey hairs, then he calmly seated himself on the divan.

"First of all, tell me how you are feeling, ma chère amie? Do set your friend's mind at rest," he said, without changing his tone of voice, in which, beneath the decorum and sympathy, there was a hint of indifference and even mockery.

"How can you expect me to feel well, when one is suffering so, morally speaking? How can anyone with feeling stay calm in times like these?" said Anna Pavlovna. "You are here for the whole evening, I hope?"

"But what about the festivities at the English ambassador's? Today is Wednesday. I really do have to show my face," said the prince. "My daughter will be calling to take me there."

"I thought today's celebrations had been cancelled. I do declare all these fêtes and fireworks are becoming an utter bore."

"Had they but known you wished it, they would have cancelled the celebrations," said the prince by force of habit, like a wound-up clock, voicing things that he did not even wish to be believed.

"Don't tease me. Eh bien, what has been decided following this dispatch from Novosiltsev? You know everything."

Whether Prince Vasily's words were wise or foolish, animated or indifferent, he uttered them in a tone that suggested he was repeating them for the thousandth time, like an actor speaking a part in an old play, as though the words were not the product of his reason, not spoken from the mind or heart, but by rote, with his lips alone.

By contrast, Anna Pavlovna Scherer, despite her forty years, was full of an impulsive vivacity which long practice had scarcely taught her to curb within the limits of courtly decorum and discretion. At every moment she seemed on the point of uttering something improper, yet although she came within a hair's breadth, no impropriety ever burst forth. She was not good-looking, but the rapturous enthusiasm of which she herself was aware in her glance and in the vivacity of her smile, which expressed her infatuation with ideal causes, evidently furnished her with that quality which was called interesting. From Prince Vasily's words and his expression it was clear that the circles in which they both moved had long ago adopted the unanimous opinion that Anna Pavlovna was a sweet, good-hearted enthusiast and patriot who dabbled in matters that were not entirely her concern and often took things to extremes, but was lovable for the sincerity and ardour of her feelings. Being an enthusiast had become her position in society, and sometimes, even when she did not really wish it, she played the enthusiast simply in order not to disappoint the expectations of those who knew her. The restrained smile that played constantly on Anna Pavlovna's face, although it did not become her faded features, was an expression, as it is in spoilt children, of a constant awareness of her own charming defect, of which she neither wished, nor was able, nor felt it necessary, to rid herself.

The contents of the dispatch from Novosiltsev, who had set out to Paris for peace negotiations, were as follows.

On arriving in Berlin, Novosiltsev had learned that Bonaparte had issued a decree annexing the Genoese Republic to the French Empire, while at the same time he was declaring his desire for reconciliation with England through the mediation of Russia. Novosiltsev, having halted in Berlin on the surmise that such coercive action on the part of Bonaparte might well alter the Emperor's intentions, had requested His Majesty's decision on whether he should move on to Paris or return home. The reply to Novosiltsev . . .