Dancing With the Stars

Dancing With the Stars

Jive, Samba, and Tango Your Way into the Best Shape of Your Life

by Guy Phillips and Tasha Brown

Title
Dancing With the Stars
Subtitle
Jive, Samba, and Tango Your Way into the Best Shape of Your Life
Author
Guy Phillips and Tasha Brown

Presents never-before-seen pictures and stories from the stars, a look at all the key dances performed on the show, and a complete dance-based workout to lose weight, get fit, and have fun.

NPR stories about Dancing With the Stars

Behind the Scenes with 'Dancing with the Stars'

September 29, 2007 • Long after reality shows seemingly hit their peak, Dancing with the Stars captivated millions of viewers, as celebrities transformed into ballroom dancers. Scott Simon went to New York to get some tango lessons from the show's contestants.

Behind the Scenes with 'Dancing with the Stars'

Excerpt: Dancing With The Stars 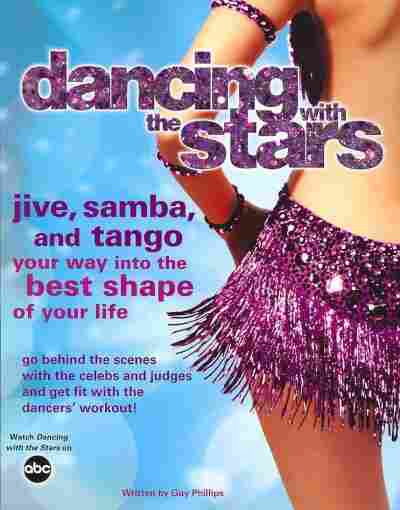 Dancing with the Stars

Jive, Samba, and Tango Your Way into the Best Shape of Your Life

The History of the Show

While brainstorming ideas in the fall of 2003, producers in the BBC entertainment department came up with the concept of bringing an old classic, Come Dancing, out from the vaults. Come Dancing was first shown on the BBC in 1949, and was primarily designed to educate the public about the joys of dancing. In 1953 the series introduced competition, in which winners were picked from the live national finals and became proud owners of the Come Dancing trophy. The show was one of the longest running in British television history, finally coming to an end in 1995, when it had begun to feel dated and audiences dwindled.

The BBC producers, led by Executive Producer Karen Smith, realized that the best way to update the show and grab the attention of viewers of all ages was to throw celebrities into the mix. So they devised the mega-hit Strictly Come Dancing.

By putting famous stars together with professional dancers, the new show was able to engage and entertain a far wider audience than simply dance fans. The traditional appeal of watching a dazzling dance performance was enhanced by witnessing the journeys of amateurs learning new skills. The fact that the amateurs were known for their success in other fields made the fish-out-of-water stories all the more compelling. One of the biggest additions was filming the backstage training so that viewers could really see the trials and tribulations of the stars learning their dances, the relationships that formed between the couples, and their wonderful transformation from the sweaty training to the glamorous live show.

Coming to the USA

The huge success of Strictly Come Dancing made it the perfect candidate to follow other UK hits like Who Wants to Be a Millionaire, The Weakest Link, and American Idol over the Atlantic to be remade for American audiences. Several of the biggest hits of recent years had been created in the UK. However, the idea of ballroom dancing on US network prime time met with some skepticism when first pitched by the UK executive producer, Richard Hopkins.

The show had already been turned down three times by US networks, but the stars aligned at ABC, where executives saw its uniqueness as a strength. John Saade at ABC summed up best just how different the show would be: "Like an alien spacecraft has landed at nine p.m. on a Wednesday night."

The ABC team wanted to maintain the uniquely British feel and asked for little to be changed from the UK show. The set, complete with audience members sitting at candlelit tables in cocktail attire, the catchy theme song, and the comforting choice of host were all a must. So it seemed only natural to bring over a team of top British producers. Conrad Green joined Richard Hopkins as executive producer, and Izzie Pick came directly from the UK series to produce, along with senior video producer Rob Wade, studio producer Matilda Zoltowski, field producer Jo Sungkur, and director Alex Rudzinski.

By March 2005 the fifteen-thousand-square-foot stage 46 at CBS studios in Hollywood, California, was booked (right next door to the American Idol studio), and the production crew had been hired. Tom Bergeron and Lisa Cannin were selected to host, and completing the picture were the six celebrities who had been brave enough to take a leap of faith with this strange British import, and see in it the same potential that ABC had. They were boy-bander Joey McIntyre, soap star Kelly Monaco, model Rachel Hunter, reality-star Trista Rehn Sutter, boxer Evander Holyfield, and Seinfeld's John O'Hurley.

It was an eclectic mix, but one that the producers thought would cover the wide range of audience appeal.

One of the keys to making the show work was the voting system. In the UK, the producers had wanted to avoid the show being purely a popularity contest and had worked hard to find a way of balancing the dancing performance with the popularity of the stars taking part. Traditionally, in ballroom dancing competitions, the competitors are scored based on their dancing ability, so the creative decision was reached to give fifty percent of the vote to the viewers and the other fifty percent to the judges. This unique scoring system allowed the viewers to vote with their hearts based on personality and performance, while the judges could concentrate on technique and dance ability. That meant anyone could take part in the show, great dancer or not.

Also unique to Dancing with the Stars is that each individual dance style has its own specific requirements and basic steps that only the judges are qualified to watch for. There are ten different ballroom and Latin-American dances, and the producers wanted each one to be as true to its original roots as possible to avoid them all merging into one wild Freestyle. The judges' input limits the couples' showboating and ensures they are challenged each week to learn the different steps and moves required. Although Joey Fatone's butt sticking out might have worked against him in the ballroom dances, he shone in his Latin-American Samba. The guidelines also mean that the performances have real depth and variety each week.

Two judges from the UK show, Len Goodman and Bruno Tonioli, were also brought to the US and teamed up with Carrie Ann Inaba to complete the panel.

Dancing with the Stars premiered on ABC on June 1, 2005, to an audience of over thirteen million, making it the most successful summer debut ever for a reality series. The audience continued to grow throughout the competition and it finished its run at number one in the ratings.

The couple twirling their way around the dance floor are only the tip of the iceberg on a show with 2 hosts, 3 judges, a 15-piece orchestra, up to 22 dancers, a production crew of over 200, and a studio audience of 550. The logistics involved to bring all these people and their equipment together for a live show are immense.