A portrait of presidential advisor and U.S. Attorney General Alberto Gonzales describes his early life, success in the legal profession, and rise to power in the cutthroat world of American politics, examining his key influence on George W. Bush and his policy decisions, including his role in drafting the controversial Patriot Act. 75,000 first printing.

NPR stories about The President's Counselor

August 27, 2007 • After months of speculation, beleaguered Attorney General Alberto Gonzales announced his resignation Monday. His tenure was marked by public debate over the use of warrantless wiretaps by the United States government and the firing of eight U.S. attorneys. 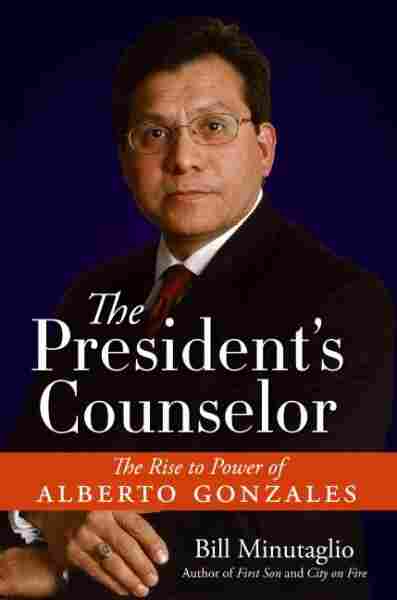 Monsignor Paul Procella, a priest from a small parish in Texas that happens to be named after a flame-haired harlot, is ambling down the carpeted, hushed hallways of the most important floor in the U.S. Department of Justice. It is the first Thursday in February 2005. He is on a private tour of one of the most heavily guarded buildings in America, because he knows someone who knows someone. The priest, a beloved fixture at his tight-knit church in a city named Humble, has come to Washington in the dead of winter because the son of one of his parishioners is being sworn into high office.

There is a secretary sitting at a desk in one hallway.

A sign on the desk reads "Office of the Attorney General."

"Is it okay if we just walk around?"