In the quiet English hamlet of Wall, Tristran Thorn embarks on a remarkable journey through the world of Faerie to recover a fallen star for his lover, the hauntingly beautiful Victoria Forester.

August 8, 2007 • Author Neil Gaiman talks about his fairy-tale novel, Stardust, and his role in adapting the book into a star-studded motion picture. Gaiman came to attention with the celebrated Sandman comic books and has since written several books for both adults and children. 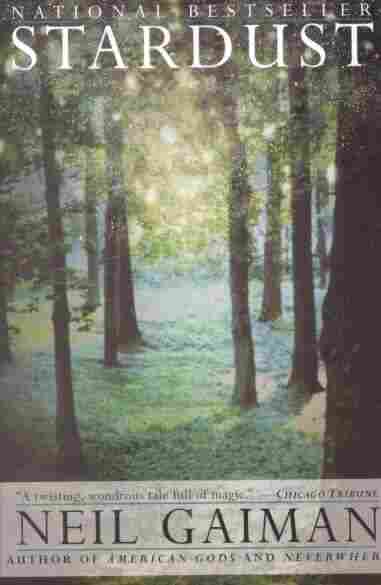 In Which We Learn of the Village of Wall, and of the
Curious Thing That Occurs There Every Nine Years

There was once a young man who wished to gain his Heart's Desire.

And while that is, as beginnings go, not entirely novel (for every tale about every young man there ever was or will be could start in a similar manner) there was much about this young man and what happened to him that was unusual, although even he never knew the whole of it.

The tale started, as many tales have started, in Wall.

The town of Wall stands today as it has stood for six hundred years, on a high jut of granite amidst a small forest woodland. The houses of Wall are square and old, built of grey stone, with dark slate roofs and high chimneys; taking advantage of every inch of space on the rock, the houses lean into each other, are built one upon the next, with here and there a bush or tree growing out of the side of a building.

There is one road from Wall, a winding track rising sharply up from the forest, where it is lined with rocks and small stones. Followed far enough south, out of the forest, the track becomes a real road, paved with asphalt; followed further the road gets larger, is packed at all hours with cars and trucks rushing from city to city. Eventually the road takes you to London, but London is a whole night's drive from Wall.

The inhabitants of Wall are a taciturn breed, falling into two distinct types: the native Wall-folk, as, grey and tall and stocky as the granite outcrop their town was built upon; and the others, who have made Wall their home over the years, and their descendants.

Below Wall on the west is the forest; to the south is a treacherously placid lake served by the streams that drop from the hills behind Wall to the north. There are fields upon the hills, on which sheep graze. To the east is more woodland.

Immediately to the east of Wall is a high grey rock wall, from which the town takes its name. This wall is old, built of rough, square lumps of hewn granite, and it comes from the woods and goes back to the woods once more.

There is only one break in the wall; an opening about six feet in width, a little to the north of the village.

Through the gap in the wall can be seen a large green meadow; beyond the meadow, a stream; and beyond the stream there are trees. From time to time shapes and figures can be seen, amongst the trees, in the distance. Huge shapes and odd shapes and small, glimmering things which flash and glitter and are gone. Although it is perfectly good meadowland, none of the villagers has ever grazed animals on the meadow on the other side of the wall. Nor have they used it for growing crops.

Instead, for hundreds, perhaps for thousands of years, they have posted guards on each side of the opening on the wall, and done their best to put it out of their minds.

Even today, two townsmen stand on either side of the opening, night and day, taking eight-hour shifts. They carry hefty wooden cudgels. They flank the opening on the town side.

The children they discourage simply with displays of the cudgel. Where ramblers and visitors are concerned, they are more inventive, only using physical force as a last resort if tales of new-planted grass, or a dangerous bull on the loose, are not sufficient.

Very rarely someone comes to Wall knowing what they are looking for, and these people they will sometimes allow through. There is a look in the eyes, and once seen it cannot be mistaken.

There have been no cases of smuggling across the wall in all the Twentieth Century, that the townsfolk know of, and they pride themselves on this.

The guard is relaxed once every nine years, on May Day, when a fair comes to the meadow.

The events that follow transpired many years ago. Queen Victoria was on the throne of England, but she was not yet the black-clad widow of Windsor: she had apples in her cheeks and a spring in her step, and Lord Melbourne often had cause to upbraid, gently, the young queen for her flightiness. She was, as yet, unmarried, although she was very much in love.

Mr. Charles Dickens was serializing his novel Oliver Twist; Mr. Draper had just taken the first photograph of the moon, freezing her pale face on cold paper; Mr. Morse had recently announced a way of transmitting messages down metal wires.

Had you mentioned magic or Faerie to any of them, they would have smiled at you disdainfully, except, perhaps for Mr. Dickens, at the time a young man, and beardless. He would have looked at you wistfully.

People were coming to the British Isles that spring. They came in ones, and they came in twos, and they landed at Dover or in London or in Liverpool: men and women with skins as pale as paper, skins as dark as volcanic rock, skins the color of cinnamon, speaking in a multitude of tongues. They arrived all through April, and they traveled by steam train, by horse, by caravan or cart, and many of them walked.

At that time Dunstan Thorn was eighteen, and he was not a romantic.

He had nut-brown hair, and nut-brown eyes, and nutbrown freckles. He was middling tall, and slow of speech. He had an easy smile, which illuminated his face from within...Continues...