Living in Leopoldville in the Congo only to be near his lover, Gillespie becomes caught up in the terror and corruption that marks that country's slide into civil war in the early 1960s.

NPR stories about The Catastrophist

Ronan Bennett: From Prisoner to Writer

July 3, 2007 • Novelist Ronan Bennett endured two stints in British prisons before he ever imagined himself a writer. He rarely writes directly about the Troubles of Northern Ireland, but the struggle against British rule is a common subtext in his work.

Ronan Bennett: From Prisoner to Writer 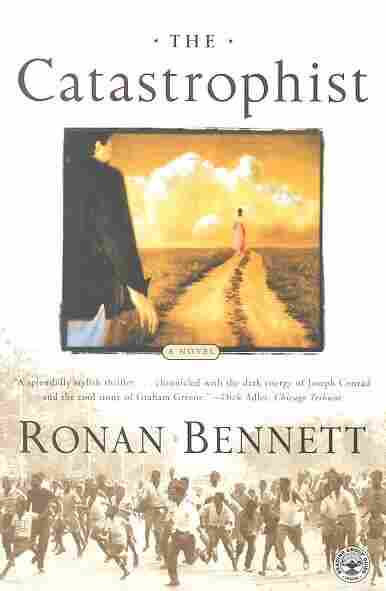 What should I be looking at now? The Sankuru is not as wide as the Congo, not at this point at least where the barque crosses, but it has the same dull mud color, the same tinge of rust after rainfall, and there are the floating tangles of water hyacinth I know from Léopoldville. I have seen them here before, I have seen them in Stanley Pool and at the cataracts below the capital, I have seen them at Matadi where they debouch to the sea. The flowers are purple or magenta, some are powder blue. They are beautiful and malign, yet more parasites for this overleeched land. The rivers will never flush away these tokens of infection. The rain fell hard in the afternoon for two hours, forcing our absurd convoy off the road — one more delay upon many. Soon after the sky cleared one of his aides claimed to have heard the engine of a spotter plane and there was general alarm, but when I looked there was nothing. What does it matter? We have reached the Sankuru. On the other side is safety, and he and Auguste and the others of the inner circle are already across. The air has cooled. These are the bewitching minutes of the red sunball and the palms where the pied crows roost, when the bamboo groans, and homeward lines of workers tread the dusty, pocked roads — how far do these people walk in a single day? Near me, very near, a frog croaks. The cicadas are beginning their chorus. What else should I note here? I am the trained observer. Smells? Yes, there are things to smell. I can smell the fish the women have piled before them like neat mounds of twisted silver nails. I can smell the boiled eggs and the pilipili and the fried manioc they have prepared in the hope of passing trade. And I smell the hot oil and exhaust fumes of the soldiers' lorries. On the far side of the river he waits with the old boatman.

The soldiers come among us, or among them, for I am not truly part of this, and because my status, my ever-evasive presence, is manifest — in spite of my visible wounds — I do not have to be afraid in the way I can see the others are afraid. Inès is afraid, though not for herself. She stands by the sky-blue Peugeot in which Pauline and little Roland have been traveling for the last three days. The doors are open, the stifled occupants begging the breezes. In the back, Pauline holds the boy. Inès, like the others of our party, studies the soldiers' movements and glances for clues as to their intentions. So far, they have exhibited signs of a morose but unspecific hostility only: as long as their animus remains general and unexcited we may yet get across to join him. They stalk the cars and passengers. No one says anything. They come to Pauline's car. An officer recognizes her and demands, first in Lingala, then in French: "Où est-il? Où est-il?" Pauline remains silent. The officer's voice rises, sweat blisters on his forehead. A soldier reaches into the car and jerks Roland from his mother's grasp. A cry. Inès starts forward. Pauline is now out of the car, she sees only her child: the soldiers' guns mean nothing to her. There are high shouted words in one of their languages, interrogatory and uncompromising. A soldier raises his rifle butt and strikes Roland in the face. And now we know.

What should I be looking at? Now that we know lives are at stake. A child's face has been broken but I have seen so much. I have seen bodies and blood. I have heard wailing and terror. I watch as though through a screen, I listen as though to a recording I might interrupt at will: the imprecations and pleas, the threats and the whimpers. I am thinking of the leprosy of politics, of the banality of this country and the low comedy of its calamities. I am thinking, actually, of Ruskin. Yes, Ruskin. And all of this makes me angry with Inès, for I should not be here and she should not be here: we neither of us belong to this moment of farce and melodrama. I actually feel impatient, almost embarrassed. I will not be able to confess this to Inès. But I have more than a little justification. There is something worked up, overheated about this whole business. Even this journey. We could have reached Stanleyville yesterday — we had a day's head start, the roads are for the most part good. As it is, he — the prize — is out of the soldiers' reach. But had we moved with even the minimum of expedition, they would all be safe: Roland would not be bleeding and crying now, his face would not be smashed. I have cause for my irritation.

Things now are getting worse. The soldiers are jumpy, scuffles are breaking out. Someone says they are Baluba tribesmen. I cannot tell, but if this is true the situation is serious, for the Baluba have scores to settle. I go to be with Inès. She is so small and frail. I put my arm around her, partly in an act of reassurance, partly to restrain her; I do not trust her temper. There is something proprietorial in my motives, I cannot deny it. Auguste is watching from the other side of the river. He is watching us, and for once — for the first time in a long time — I am nearer than he. I am beside her again, and perhaps I will be able to stay beside her.

It is like trying to hold a bird. She moves restlessly this way and that, struggling to follow the wheeling eddies of the affray. I do not know if she is aware of me or my touch or my careful intentions. She does not meet my gaze but beats the cage of my arms and struggles towards the makeshift jetty where, as though marshaled by a command only I have not heard, our party and the soldiers have thronged. I let her go, and she glances at me for the briefest moment, a look between alarm and accusation: she has news of impending tragedy, and again I have not heard. She is off, away from me, running to join the others. The melee has been suddenly quenched, there are no human sounds. I follow her, and as I approach I discover the cause of this sudden respite. We gaze across the river.

He already has one foot on the barque. The crude wooden raft can take one vehicle and its passengers at a time. Mungul and the others had insisted he go first. Even then they had dawdled. I can see Mungul now, and Mulele and Kemishanga, pleading with him not to go back. They keep a nervous watch on the soldiers; even now they are slipping away into the bush, leaving words of farewell to hang in the air behind them, apology for their essential desertion. Auguste — he looks distressed, near to tears — embraces his leader. Then Auguste too is gone. Now there is only the boatman.

The pole pierces the water film, the muscle balls in the boatman's arm, the veins swell...and they are launched. I see Inès close her eyes. Some of our party, distrait and grieving, break from the jetty like the first mourners retiring from a burial. My irritation rises, I feel like reminding them of all the avoidable delays which have led to this.

He stands towards the front of the barque, tall and thin, glasses glinting in the last of the sun. What is he thinking? He will have seen the soldier hit his two-year-old son, and certainly he will be concerned about Pauline's safety. Perhaps this gesture is for her, repayment for his innumerable adventures. (Inès, whom I accuse of having a touch of the puritan in her, has complained many times since our arrival here: "The men of this country!") I do not believe he is convinced that he is crossing to his death. Probably he is counting on being able to talk our way out of this problem, as he talked his way out of the last, and the one before that. This is not heroic self-sacrifice. It is, as ever with him, political calculation and self-belief.

When they are twenty feet from the jetty, a small plane appears and swoops down over the barque. It follows the course of the river, then banks sharply and climbs to circle above. Once again the atmosphere alters abruptly. Disbelief and resignation give way to high tension, the apprehension is palpable. I hear a voice cry out, clogged with emotion, "No!" It is Inès. "Patrice, no!"

Pauline clutches Roland and stares in bewilderment. I have only ever seen her in stylish European clothes and high heels, but now she is a young village girl: she looks needfully from face to face — can someone explain this to her? What will it mean for her? For her child? The wood of craft and jetty connect with a listless clump. The soldiers come forward for their prisoner. I move away to stand alone, apart, removed from the people and things of this unnecessary moment. The cicadas chirp, the frogs croak.

As the Baluba soldiers take him, a look of alarm crosses his face; he now understands the nature of his position. I am thinking of Ruskin, of his injunction: Does a man die at your feet, your business is not to help him, but to note the color of his lips. On the far bank, Auguste has reappeared for a wordless leave-taking. Inès looks up through her tears to raise a hand, a soldier rushes over to take aim, and Auguste backs away into the bush.

This is a story of failure.