Take a Nap! Change Your Life

Take a Nap! Change Your Life

Discusses why napping is important to physical and mental health, explains sleep patterns and how napping can enhance them, and includes a "Nap Wheel" on the front cover to help readers plan the optimum nap.

NPR stories about Take a Nap! Change Your Life

It's Time You Took a Nap!

June 25, 2007 • For most of us, regular naps are a distant memory of childhood. But taking a regular nap can be a "life-saving habit," according to Sara Mednick. 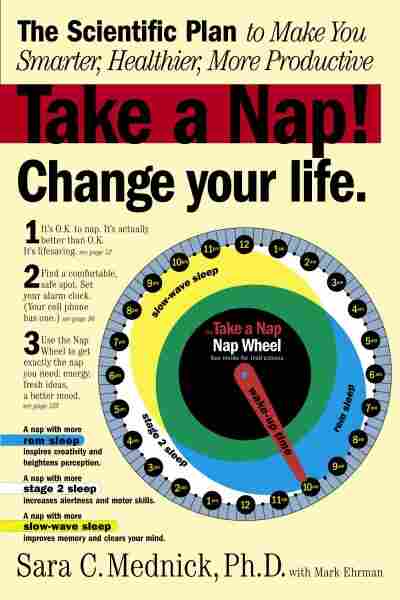 The new nap: not your grandfather’s siesta

Imagine yourself in a perfect world. Your mood is positive. Your brain is operating at maximum efficiency. Your body feels healthy, energetic and agile. You have enough time to complete all the tasks at hand and still enjoy the company of family and friends. Every one of your goals is attainable.

In this wonderful land of your imagination, you enjoy a well-balanced diet, get enough exercise, breathe clean air and spend quality time with friends and family. What you aren’t doing is walking around tired, right?

So ask yourself, “If I inhabited such a place, how much would I sleep?” Stumped? You’re not alone. Most people don’t get further than “a whole lot more than I’m sleeping now.” After all, how do you remove the pressures of bills, job and relationships to create an oasis where you can even begin to envision what such a perfect world would involve?

Lucky for you, scientists have already resolved this issue. Our results back up what historians, anthropologists, artists and numerous brilliant leaders and thinkers have been telling their contemporaries throughout the ages. In a perfect world, all humans, including you, would nap.

Let’s look at the rest of the animal kingdom. Do any other species try to get all their sleep in one long stretch? No. They’re all multiphasic, meaning that they have many phases of sleep. Homo sapiens (our modern industrialized variety, anyway) stand alone in attempting to satisfy the need for sleep in one phase. And even that distinction is a relatively recent development. For most of our history, a rest during the day was considered as necessary a component of human existence as sleeping at night. As A. Roger Ekirch,one of the few historians to study sleep, put it, “Napping is a tool as old as time itself.”

Does this mean that cave people napped? Well, little is known about sleep/wake habits back in the Stone Age, but the best guess is that sleep occurred throughout the day and night. Looking at contemporary primitive cultures, we find that the Gebusi of Papua New Guinea engage in multiphasic sleep. It makes sense that primitive peoples would sleep in short periods, since someone always has to keep watch for predators, but most of us no longer have to lose sleep over lions and tigers. With the advent of civilization, our sleep consolidated into fewer episodes, and eventually we fell into what scientists have come to realize is our fundamental, internally programmed pattern: biphasic sleep composed of one long period during the night and a short period in the middle of the day.

By the first century B.C., the Romans had divided their day into periods designated for specific activities, such as prayer, meals and rest. Midday became known as sexta, as in the sixth hour (noon by their way of counting), a time when everyone would go to bed. The word has survived in the familiar term siesta.

But hard scientific evidence that the nap is woven into our DNA didn’t arrive until the modern era, when Dr. Jurgen Aschoff of the Max Planck Institute in Germany carried out a study that can only be described as peculiar. In the 1950s, Dr. Aschoff refurbished some abandoned World War II bunkers with all the amenities of small one-bedroom flats, except that they had no windows, clocks, televisions, radios or newspapers—no way to tell the date or time or even whether it was day or night. He then paid volunteers to live in them for a period of weeks, during which time he monitored their temperature, blood pressure and various other biological indicators. After a short transitional phase, subjects generally experienced one large dip in energy in the middle of the “night,” when they would sleep six to seven hours; roughly 12 hours later, a mini-dip would drive them back to bed for a shorter period of sleep.

In other words, when people are forced to follow their own internal imperatives, the nap quickly reasserts its rightful place in the behavioral scheme. Subsequent studies proved this to be the case even among people who believed themselves incapable of napping, as well as in circumstances where they were specifically instructed not to nap!

The unseen hand guiding sleep and waking is our so-called biological clock or circadian (circa = around, dia = day) rhythm. This fundamental property of the human circuitry regulates sleep as well as body temperature, heart rate, growth hormone and urine production. But it doesn’t just govern human biology. All living things— from a single blood cell to a two-ton elephant—dance to the beat tapped out by their circadian drum.

While Dr. Aschoff arrived at his discovery by accident, like a Christopher Columbus of human biology, University of Pennsylvania professor Dr. David Dinges was the first scientist to pose the direct question “Is napping natural?” In 1989 he brought together an impressive collection of sleep experts to examine napping across life span, occupation, culture and even species. A consensus emerged that not only is napping beneficial for alertness, mental ability and overall health, but our brains are actually programmed for it. “In examining sleep’s orphan,” Dr. Dinges concluded, “we found a lost progeny.”