In the future, most people will have a Feed chip implanted in their heads that connects everyone to an evolved version of the Internet — at the cost of even basic privacy. During spring break on the moon, Titus and Violet meet and build a relationship when their Feeds are hacked.

June 22, 2007 • Imagine a world where computer chips are implanted into babies at birth and school is unnecessary, since you can Google any information you want. That's the setting for Feed by M.T. Anderson. Critic Nancy Pearl recommends this for both teen and adult discussion groups. 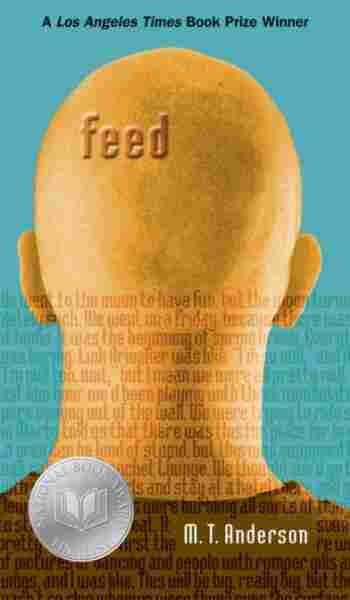 It was maybe, okay, maybe it was like two days after the party with the "never pukes when he chugalugs" that Violet chatted me first thing in the morning and said she was working on a brand-new project. I asked her what was the old project, and she was like, did I want to see the new one? I said, Okay, should I come over to su casa? I've never been there, and she was like, No, not yet. Let's meet at the mall.

I was like, Okay, sure, fine, whatever swings your string, and she was all, Babycakes, you swing my string, which is a nice thing for someone to say to you, especially before you use mouthwash.

So I flew over to the mall near her house through the rain, which was coming down outside in this really hard way. Everyone had on all their lights until they got above the clouds. Up there it was sunny, and people were flying very businesslike.

The mall was really busy, there were a lot of crowds there. They were buying all this stuff, like the inflatable houses for their kids, and the dog massagers, and the tooth extensions that people were wearing, the white ones which you slid over your real teeth and they made your mouth just like one big single tooth going all the way across.

Violet was standing near the fountain and she had a real low shirt on, to show off her lesion, because the stars of the Oh? Wow! Thing! had started to get lesions, so now people were thinking better about lesions, and lesions even looked kind of cool. Violet looked great in her low shirt, and besides that she was smiling, and really excited for her idea.

For a second we said hello and just laughed about all of the stupid things people were buying and then Violet, she pointed out that, regarding legs to stand on, I didn't have very much of one, because I was wheeling around a wheelbarrow full of a giant hot cross bun from Bun in a Barrow.

I asked her what the idea was.

She said, "Look around you." I did. It was the mall. She said, "Listen to me." I listened. She said, "I was sitting at the feed doctor's a few days ago, and I started to think about things. Okay. All right. Everything we do gets thrown into a big calculation. Like they're watching us right now. They can tell where you're looking. They want to know what you want."

"They're also waiting to make you want things. Everything we've grown up with — the stories on the feed, the games, all of that — it's all streamlining our personalities so we're easier to sell to. I mean, they do these demographic studies that divide everyone up into a few personality types, and then you get ads based on what you're supposedly like. They try to figure out who you are, and to make you conform to one of their types for easy marketing. It's like a spiral: They keep making everything more basic so it will appeal to everyone. And gradually, everyone gets used to everything being basic, so we get less and less varied as people, more simple. So the corps make everything even simpler. And it goes on and on."

This was the kind of thing people talked about a lot, like, parents were going on about how toys were stupid now, when they used to be good, and how everything on the feed had its price, and okay, it might be true, but it's also boring, so I was like, "Yeah. Okay. That's the feed. So what?"

"This is my project."

She smiled and put her finger inside the collar of my shirt. "Listen," she said. "What I'm doing, what I've been doing over the feed for the last two days, is trying to create a customer profile that's so screwed, no one can market to it. I'm not going to let them catalog me. I'm going to become invisible."

I stared at her for a minute. She ran her finger along the edge of my collar, so her nail touched the skin of my throat. I waited for an explanation. She didn't tell me any more, but she said to come with her, and she grabbed one of the nodules on my shirt — it was one of those nodule shirts — and she led me toward Bebrekker & Karl.

We went into the store, and immediately our feeds were all completely Bebrekker & Karl. We were bannered with all this crazy high-tech fun stuff they sold there. Then a guy walked up to us and said could he help us. I said I didn't know. But Violet was like, "Sure. Do you have those big searchlights? I mean, the really strong ones?"

"Yeah," he said. "We have ... yeah. We have those." He went over to some rack, and he took these big searchlights off the rack. He showed us some different models. The feeds had specs. They showed us the specs while he talked.

When he went into the back to get another, cheaper searchlight, I said to Violet, "What next?"

Bebrekker & Karl were bannering us big. It was, We've streamlined the Tesla coil for personal use — you can even wear it in your hair! With these new, da da da, and Relax, yawn, and slump! While our greased cybermassage beads travel up and down your back! Guaranteed to make you etc., like that.

I was like, "Okay, huh?" but the guy came back and he had another searchlight.

He told us, "You can see shit real good with this one? I have one of these on my upcar. It's sometimes like — whoa, really — whoa. There was this one time? And I was flying along at night and I shined the light down at the ground, to look at the tops of all the suburb pods? And all over the top of them, it looked like it was moving, like there was a black goo? So I turned up the brightness, and I went down, and I shined it more bright, and it turned out the black moving goo was all these hordes of cockroaches. There were miles of them, running all over the tops of the domes. ...