The Voyage Of The Dawn Treader

The Voyage Of The Dawn Treader

Title
The Voyage Of The Dawn Treader
Author
C.S. Lewis

Lucy and Edmund, accompanied by their peevish cousin Eustace, sail to the land of Narnia where Eustace is temporarily transformed into a green dragon because of his selfish behavior and skepticism. Reprint. 35,000 first printing.

NPR stories about The Voyage Of The Dawn Treader

Excerpt: The Voyage Of The Dawn Treader 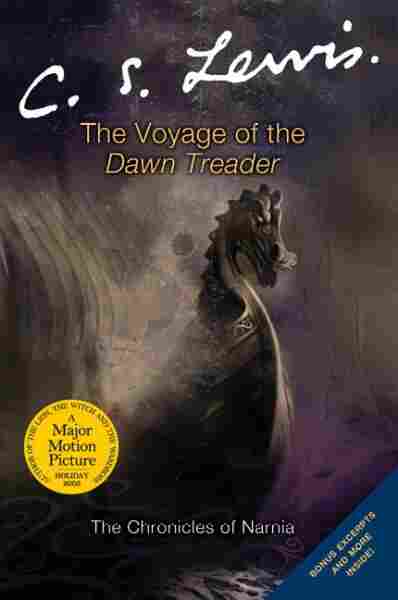 The Voyage of the Dawn Treader (Adult)

Everyone was cheerful as the Dawn Treader sailed from Dragon Island. They had fair winds as soon as they were out of the bay and came early the next morning to the unknown land which some of them had seen when flying over the mountains while Eustace was still a dragon. It was a low green island inhabited by nothing but rabbits and a few goats, but from the ruins of stone huts, and from blackened places where fires had been, they judged that it had been peopled not long before. There were also some bones and broken weapons.

"Or the dragon's," said Edmund.

The only other thing they found there was a little skin boat, or coracle, on the sands. It was made of hide stretched over a wicker framework. It was a tiny boat, barely four feet long, and the paddle which still lay in it was in proportion. They thought that either it had been made for a child or else that the people of that country had been dwarfs. Reepicheep decided to keep it, as it was just the right size for him; so it was taken on board. They called that land Burnt Island, and sailed away before the noon.

For some five days they ran before a south-south-east wind, out of sight of all lands and seeing neither fish nor gull. Then they had a day when it rained hard till the afternoon. Eustace lost two games of chess to Reepicheep and began to get like his old and disagreeable self again, and Edmund said he wished they could have gone to America with Susan. Then Lucy looked out of the stern windows and said:

"Hullo! I do believe it's stopping. And what's that?"

They all tumbled up to the poop at this and found that the rain had stopped and that Drinian, who was on watch, was also staring hard at something astern. Or rather, at several things. They looked a little like smooth rounded rocks, a whole line of them with intervals of about forty feet in between.

"But they can't be rocks," Drinian was saying, "because they weren't there five minutes ago."

"Yes, and there's another one coming up," said Edmund.

"Hang it!" said Caspian. "The whole thing is moving this way."

"And moving a great deal quicker than we can sail, Sire," said Drinian. "It'll be up with us in a minute."

They all held their breath, for it is not at all nice to be pursued by an unknown something either on land or sea. But what it turned out to be was far worse than anyone had suspected. Suddenly, only about the length of a cricket pitch from their port side, an appalling head reared itself out of the sea. It was all greens and vermilions with purple blotches — except where shellfish clung to it — and shaped rather like a horse's, though without ears. It had enormous eyes, eyes made for staring through the dark depths of the ocean, and a gaping mouth filled with double rows of sharp fish-like teeth. It came up on what they first took to be a huge neck, but as more and more of it emerged, everyone knew that this was not its neck but its body and that at last they were seeing what so many people have foolishly wanted to see — the great Sea Serpent. The folds of its gigantic tail could be seen far away, rising at intervals from the surface. And now its head was towering up higher than the mast.

Every man rushed to his weapon, but there was nothing to be done, the monster was out of reach. "Shoot! Shoot!" cried the Master Bowman, and several obeyed, but the arrows glanced off the Sea Serpent's hide as if it were iron-plated. Then, for a dreadful minute, everyone was still, staring up at its eyes and mouth and wondering where it would pounce.

But it didn't pounce. It shot its head forward across the ship on a level with the yard of the mast. Now its head was just beside the fighting top. Still it stretched and stretched till its head was over the starboard bulwark. Then down it began to come — not onto the crowded deck but into the water, so that the whole ship was under an arch of serpent. And almost at once that arch began to get smaller — indeed on the starboard the Sea Serpent was now almost touching the Dawn Treader's side.

Eustace (who had really been trying very hard to behave well, till the rain and the chess put him back) now did the first brave thing he had ever done. He was wearing a sword that Caspian had lent him. As soon as the serpent's body was near enough on the starboard side he jumped onto the bulwark and began hacking at it with all his might. It is true that he accomplished nothing beyond breaking Caspian's second-best sword into bits, but it was a fine thing for a beginner to have done.

Others would have joined him if at that moment Reepicheep had not called out, "Don't fight! Push!" It was so unusual for the Mouse to advise anyone not to fight that, even in that terrible moment, every eye turned to him. And when he jumped up onto the bulwark, forward of the snake, and set his little furry back against its huge scaly, slimy back, and began pushing as hard as he could, quite a number of people saw what he meant and rushed to both sides of the ship to do the same. And when, a moment later, the Sea Serpent's head appeared again, this time on the port side, and this time with its back to them, then everyone understood.