Accessibility links
Are We Rome? NPR coverage of Are We Rome?: The Fall of an Empire and the Fate of America by Cullen Murphy. News, author interviews, critics' picks and more.

The Fall of an Empire and the Fate of America

Title
Are We Rome?
Subtitle
The Fall of an Empire and the Fate of America
Author
Cullen Murphy

Offers a compelling study that compares modern-day America to the rise and fall of ancient Rome, offering a series of warnings, nuanced lessons, and thought-provoking strategies designed to avoid the Roman Empire's fate.

NPR stories about Are We Rome?

Cullen Murphy Reads 'Are We Rome?'

June 18, 2007 • Is America the new Rome? Author Cullen Murphy explores the theory in his new book.

Excerpt: Are We Rome? 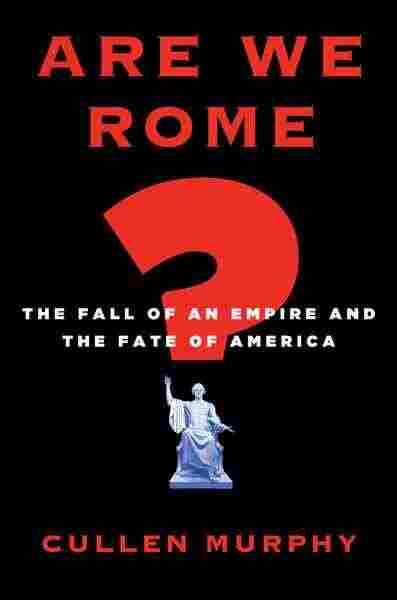 Prologue
The Eagle in the Mirror

The Empire That Won't Go Away

Fly Through
I
first visited Rome at the age of twelve, some forty years ago, and have been
back a dozen times. It is strange to think that the emperor Diocletian himself
didn't see Rome until he was in his mid-sixties, older than I am now — he
was born elsewhere, always away on business, and didn't visit the greatest
city in the empire until celebrating the twentieth year of his reign. (And he
didn't like it, found it extravagant, crude, out of control: Las Vegas meets
Blade Runner.) Nowadays it is possible to visit ancient Rome remotely, on
computerized "fly-through" tours that allow you to zoom in to a three-
dimensional reconstruction of the ancient Forum. The aim, eventually, is to
render the city in full, layer by layer, archaeologically correct to the greatest
imaginable degree. Here you are in, say, the third century a.d., on the
Campus Martius, the Field of Mars, near the Mausoleum of Augustus, not far
from the marble Ara Pacis, the Altar of Peace, the great monument to
Augustan tranquillity. And now, a little to the east, here you are in the Forum
of Trajan, above it the largest marketplace in the world — the Mall of
Romanita, we'd call it today. And after that, outside the monumental city
center, you wander among the six-story tenement buildings known as
insulae, or "islands," teeming and squalid and prone to fire, the ground floors
everywhere crowded with shops. Press a key and the years peel away: you
can see the city at the time of Marcus Aurelius, in the second century a.d.,
or, earlier, of Hadrian, or Augustus, or Julius Caesar, or Cato the Elder, or at
the time of the kings, before the sixth century b.c. Watch the walls contract,
the temples disappear, the imperial McMansions on the Palatine shrink into
republican villas, and the villas into huts, until all that is left on the wooded hill
is the legendary cave where Romulus and Remus, the founders of Rome,
were suckled by a she-wolf.
I remember the last day of my first trip to Rome, a trip undertaken
in real time and space; I walked alone in the early morning with a
sketchbook. The ancient paving stones of the Via Sacra were polished with
wear, the sun already promising heat, the postcard sellers setting up their
stalls like the guides and hawkers who catered to tourists in the very same
spots two thousand years before. This was in the mid-1960s, before the
thousands of cats that inhabited Rome's ancient precincts had been
removed, and the landscape was subtly animated by slurry pixels of feline
movement.
I made a drawing that morning, which I still have, of the three
standing columns of the Temple of Castor, above the reflecting pool. I
remember thinking as I worked, looking up occasionally at the ruined hillside
of the Palatine in the near beyond, about the layer cake of happenstance
connecting Then and Now. Years later, I came across the fantasy version of
that schoolboy reverie: the comparison attempted by Sigmund Freud
between the human psyche and the archaeology of Rome. "Historians tell
us," he begins, "that the oldest Rome was the Roma Quadrata, a fenced
settlement on the Palatine. Then followed the phase of the Septimontium, a
federation of the settlements on the different hills; after that came the city
bounded by the Servian Wall; and later still, after all the transformations
during the periods of the republic and the early Caesars, the city which the
emperor Aurelian surrounded with his walls." Now imagine, he goes on, that
rather than each stage being obliterated by the next, they all somehow
survive. Thus it would be possible to see not only the Colosseum in all its
grandeur but also the lake in front of Nero's palace, which it replaced. We
could gaze simultaneously at today's Castel Sant'Angelo, an imposing
umber fortress, and at the bright marble tomb of Hadrian, crowned with a
grove of trees, from which the fortress grew. Could our minds be something
like that — a psychic device "in which nothing that has come into existence
will have passed away, and all the earlier phases of development continue to
exist alongside the latest one"?
Well, no, that magic doesn't really work for the mechanics of the
mind, Freud decided. But it does work for the way we accrue perceptions of
history: as an exercise, we can set anything alongside anything else. If
Rome and America can exist simultaneously, why not try to look at them
that way?