Accessibility links
Plenty NPR coverage of Plenty: One Man, One Woman, and a Raucous Year of Eating Locally by Alisa Smith and J. B. Mackinnon. News, author interviews, critics' picks and more.

One Man, One Woman, and a Raucous Year of Eating Locally

by Alisa Smith and J. B. Mackinnon

Title
Plenty
Subtitle
One Man, One Woman, and a Raucous Year of Eating Locally
Author
Alisa Smith and J. B. Mackinnon

The authors describe one year in their lives spent eating only foods grown locally or produced within one hundred miles of their home, sharing their reflections on the benefits and pitfalls of local eating, with seasonal recipes.

May 20, 2007 • In their new book, Plenty: One Man, One Woman, and a Raucous Year of Eating Locally, authors Alisa Smith and J.B. Mackinnon devote a year to eating only food produced within 100 miles of their Vancouver home. 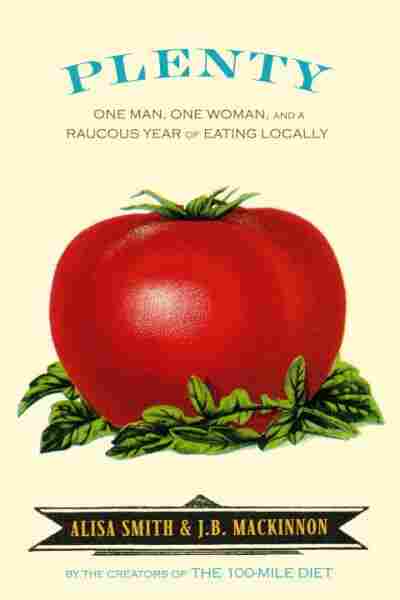 Place the fresh-picked leaves in a mug. Add water at a rolling boil. Steep for 6 minutes. A simple beginning.

Man is born free and everywhere is in chain stores.

The year of eating locally began with one beautiful meal and one ugly statistic.

First, the meal. What we had on hand, really, was a head of cabbage. Deep inside its brainwork of folds it was probably nourishing enough, but the outer layers were greasy with rot, as though the vegetable were trying to be a metaphor for something. We had company to feed, and a three-week-old cabbage to offer them.

It wasn’t as though we could step out to the local megamart. We—Alisa and I—were at our “cottage” in northern British Columbia, more honestly a drafty, jauntily leaning, eighty-year-old homestead that squats in a clearing between Sitka spruce and western redcedar trees large enough to crush it into splinters with the sweep of a limb. The front door looks out on a jumble of mountains named after long-forgotten British lords, from the peaks of which you can see, just to the northwest, the southern tip of the Alaska Panhandle. There is no corner store here. In fact, there is no electricity, no flush toilet, and no running water but for the Skeena River rapids known as the Devil’s Elbow. They’re just outside the back door. Our nearest neighbor is a black bear. There are also no roads. In fact, the only ways in or out are by canoe, by foot over the distance of a half-marathon to the nearest highway, or by the passenger train that passes once or twice a day, and not at all on Tuesdays. So: we had a cabbage, and a half-dozen mouths to feed for one more autumn evening. Necessity, as they say, can be a mother.

I can’t remember now who said what, or how we made the plan, or even if we planned it at all. What I know is that my brother David, a strict vegetarian, hiked to the mouth of Fiddler Creek, which straight-lines out of a bowl of mountains so ancient they make you feel perpetually reborn, and reeled in an enormous Dolly Varden char. Our friends Kirk and Chandra, who are the sort of people who can tell a Bewick’s wren from a rufous-crowned sparrow by ear, led a party into the forest and returned with pound upon pound of chanterelle, pine, and hedgehog mushrooms. I rooted through the tall grass to find the neglected garden plot where, months earlier, we had planted garlic and three kinds of potato; each turned up under the spade, as cool and autonomous as teenagers. Alisa cut baby dandelion leaves, while her mother picked apples and sour cherries from an abandoned orchard, and rose hips from the bushes that were attempting to swallow the outhouse. The fruit we steeped in red wine—all right, the wine came from Australia. Everything else we fried on the woodstove, all in a single huge pan.

It was delicious. It was a dinner that transcended the delicate freshness of the fish, the earthy goodness of the spuds that had sopped up the juices of mushrooms and garlic. The rich flavors were the evening’s shallowest pleasure. We knew, now, that out there in the falling darkness the river and the forest spoke a subtle language we had only begun to learn. It was the kind of meal that, when the plates were clean, led some to dark corners to sleep with the hushing of the wind, and others to drink mulled wine until our voices had climbed an octave and finally deepened, in the small hours, into whispers. One of the night’s final questions, passed around upon faces made golden by candlelight: Was there some way to carry this meal into the rest of our lives?

A week later we were back in our one-bedroom apartment in Vancouver, surrounded by two million other people and staring out the sitting-room window. We have a view of a parking lot and two perpetually overloaded Dumpsters. It was as good a place as any to contemplate the statistic. The number just kept turning up: in the reports that Alisa and I read as journalists; in the inch-long news briefs I’ve come to rely on as an early-warning system for stories that would, in a few months or a few years, work their way into global headlines. According to the Leopold Center for Sustainable Agriculture at Iowa State University, the food we eat now typically travels between 1,500 and 3,000 miles from farm to plate. The distance had increased by up to 25 percent between 1980 and 2001, when the study was published. It was likely continuing to climb.

I didn’t know any more about it than that. It was enough. Like so many other people, Alisa and I had begun to search for ways to live more lightly in an increasingly crowded and raggedy-assed world. There is no shortage of information about this bright blue planet and its merry trip to hell in a hand- basket, and we had learned the necessary habit of shrugging off the latest news bites about “dead zones” in the Gulf of Mexico or creatures going extinct after 70 million years—70 million years—on Earth. What we could not ignore was the gut feeling, more common and more important than policy makers or even scientists like to admit, that things have gone sideways. That the winter snow is less deep than it was when we were children, the crabs fewer under the rocks by the shore, the birds at dawn too quiet, the forest oddly lonesome. That the weather and seasons have become strangers to us. And that we, the human species, are in one way or another responsible. Not guilty, but responsible.

The gut feeling affects people. I received a letter once, as a journalist, from a young man who had chained himself to a railing in a mall on the biggest shopping day of the year in America, the Saturday after Thanksgiving, and set himself on fire to protest rampant consumerism. He survived, barely, and was ordered into mental health care, but all of his opinions were of a kind commonly held by some of the most lucid and admired ecologists and social theorists of our times. A friend of mine, a relationship counselor, told me of a couple whose marriage was being tested by a disagreement over the point at which the world’s reserves of cheap petroleum will surpass maximum production and begin to decline. Concerned for his child’s future in an “end of oil” scenario, the husband, an otherwise typical health-care provider, wanted to go bush, learn how to tan buckskins, teach their boy to hunt and forage. The wife, equally concerned for the child, preferred everyday life in a society where carbonated soda is the leading source of calories in the diet of the average teenager and the New England Journal of Medicine reports that, owing to obesity and physical inactivity, the life spans of today’s children may be shorter than those of their parents. So who’s crazy?

A more typical response is the refusal to purchase an enormous, fuel-inefficient SUV. Alisa and I had made that choice. Yet, as the Leopold Center numbers seemed to suggest, we had no cause to feel holier-than-thou. Each time we sat down to eat, we were consuming products that had traveled the equivalent distance of a drive from Toronto, Ontario, to Whitehorse, Yukon Territory, or from New York City to Denver, Colorado. We were living on an SUV diet.

“I think we should try eating local food for a year.”

We were at the breakfast table when these words came out of my mouth. Alisa did not look up at me as though I were insane. We had begun to do these kinds of things, insuring the car in the summer only and getting through the winter by bicycle; or living part of each year in a northern hideaway where the “emergency procedure” was to wave your arms in front of a passing freight train and then sit tight and wait—the following train was the one that would stop.

Besides, I do all the cooking.

Alisa had a pensive look on her face. “It might not even be possible,” she said. A long pause settled between us. “What about sugar?”

She knew immediately, I think, that she had lost the argument. What about sugar? Well, I had learned one or two things about sugar over the previous year, while researching a book set in the Dominican Republic. The journey had taken me through the bateys, the shanties inhabited by mainly ethnic Haitian sugar workers, certainly some of the world’s poorest people. One afternoon I went out with a nun to pick up an elderly cane-cutter; there was a space for him in the old folks’ home that had been set up by the Catholic sisters. We drove past walls of green cane stalks to a clearing with patched-together tin shelters and one-room concrete shacks. The man was leaning against a wall, literally holding himself together with his hands. He had worked so hard and for so long that his hip socket had worn out, and he could not walk without pressing the femur into place. I carried his bag, which contained everything he had to show for a lifetime of labor. It was a schoolchild’s backpack, with a broken zipper. Staring out at the men cutting cane as we departed, he said into the air, “Hungry. I’ve been hungry all these years.”

I had taken on the irritating habit, whenever Alisa came to me with some complaint that I considered overly modern and urban, such as the effects of rainfall on suede or a pinched nerve from talking too long on the phone, of saying that I would make sure to let them know all about it in the bateys.

I arched an eyebrow in Alisa’s direction. The question of sugar was a reminder of why I wanted to try this local-eating experiment in the first place. It isn’t only that our food is traveling great distances to reach us; we, too, have moved a great distance from our food. This most intimate nourishment, this stuff of life—where does it come from? Who produces it? How do they treat their soil, crops, animals? How do their choices—my choices—affect my neighbors and the air, land, and water that surround us? If I knew where my food and drink came from, would I still want to eat it? If even my daily bread has become a mystery, might that total disconnection be somehow linked to the niggling sense that at any moment the apocalyptic frogs might start falling from the sky?