Traces the harrowing and failed 1848 escape attempt of more than seventy slaves, an event that threw Washington, D.C., into turmoil and galvanized the debate over slavery in Congress, in a narrative account that focuses on the freedom quest of teenage sisters Mary and Emily Edmonson.

NPR stories about Escape on the Pearl

May 9, 2007 • After a failed 1848 escape of slaves in Washington, D.C., divisions deepened between influential slave-owners and abolitionists. The nation's capital was swept up in controversy that would soon change the course of history.

Excerpt: Escape On The Pearl 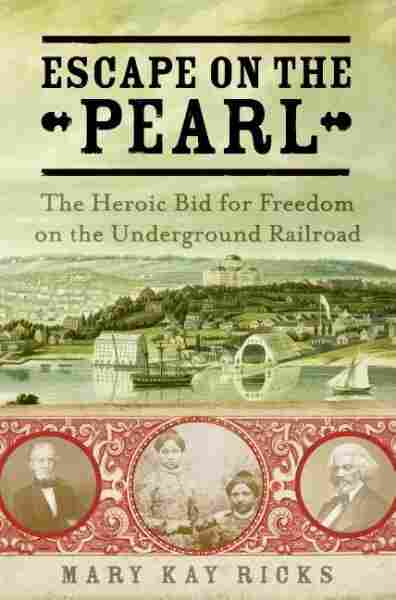 The Heroic Bid for Freedom on the Underground Railroad

On the overcast evening of April 15, 1848, at around 9:00 p.m., a soft clump of dirt struck the window of a servant's small room above the kitchen in the home of Alexander Ray, a prominent businessman in Washington and Georgetown. The family's spacious and well appointed house stood in the Foggy Bottom neighborhood, west of the President's House, tucked between Pennsylvania Avenue and the Potomac River, and just a few blocks from where a twenty-two-foot revolving dome cradled the Naval Observatory's telescope. Ray was a prosperous merchant who had the means and the connections to hire the very best of servants, and it was well known in their circle that a family by the name of Edmonson was uncommonly bright and talented help for the better class of people.

That evening, the noise at the upstairs window alerted thirteen-year-old Emily Edmonson, a still slightly plump girl with a warm brown complexion somewhere between her father's deeper color and her mother's much lighter skin tone. Emily's appealing features were set in a slightly rounded, gentle face that already showed the promise of the lovely young woman she was becoming. Lifting the window, she saw her older brother Samuel, about five feet, six inches tall and fair- skinned like his mother, standing at the side door of the house and looking up at her window. He had come from an elegant home some eighteen blocks to the east on Judiciary Square, not far from the Capitol. Samuel lived and worked as a butler in the home of Joseph Bradley, one of Washington's most successful and prominent lawyers.

Emily, neatly and modestly dressed as always, quickly picked up a small bag and quietly slipped through the house and out the door into the sleepy neighborhood. She and her brother began walking east near a factory at Seventeenth Street that produced ice cream, which could be delivered to a customer's door for $2.50 a quart, a hugely expensive treat at a time when an acre of nearby Mary land farmland cost about $15 and skilled workers earned around $1.25 a day. They walked steadily and quietly toward the other side of the Executive Mansion, which, as the Stranger's Guide in the most recent City Directory of Washington explained, was now commonly called the White House.

Emily and Samuel carefully made their way through the unlit and largely unpaved streets. The Washington Gas Light Company was in its formative stages with a bill of incorporation waiting to be reported in the House of Representatives from the Congressional Committee on the District of Columbia. Unlike New York, Boston, St. Louis, Louisville, Baltimore, or Newark, the city lacked any or ganized system of modern streetlights, and public lighting was limited to the whale oil that burned in a few dozen twelve-foot-tall iron street lamps along Pennsylvania Avenue designed by Charles Bulfinch, the architect of the Capitol's low, copper-sheathed wooden dome. A year earlier, Congress had seen to its own needs by installing a self-contained gas lighting system that functioned only when Congress was in session. One of the city newspapers reported that the tall lighting apparatus had resulted in an alarmingly high death rate for swarms of birds drawn to its unusual light.

The darkness served brother and sister well as they made their way to another of the city's still few private homes near Thirteenth and G Streets, where their sister Mary worked, not far from where the recently deceased former president, John Quincy Adams, had lived. Though certainly not a radical abolitionist, Adams had endeared himself to enemies of slavery when he argued the appeal before the Supreme Court that freed the Africans who had revolted onboard the ship called La Amistad and when, as a member of Congress, he successfully campaigned against a congressional gag rule that had for eight years automatically tabled any slavery-related petition.

Mary was watching for her brother and sister. When Emily cautiously called up to her from the back of the house, Mary quickly opened the window above them and, to prevent alerting anyone, tossed out her shoes. At five feet, six inches tall, the slim, fifteen-year-old Mary stood four inches taller than Emily and carried herself with a more grave countenance over her lovely features. She was a sister to look up to in more ways than height: Mary had a particularly spiritual and winsome personality that immediately won over all she met.

Picking up her small bundle of belongings, Mary joined Emily and Samuel outside the house and quickly slipped on her shoes. The siblings stopped briefly to pick up food from a nearby bakery, where the late night shift was preparing breakfast foods, and, in a trade where many blacks worked, found a trusted friend who was willing to discreetly supply them with rolls. With a half-hour walk ahead of them and time running short, the three Edmonsons set off at a brisk pace, but not so fast so that they drew untoward attention. This was not a night to answer awkward questions about where they might be going when they were so close to the 10:00 curfew bell that rang for all blacks, free or enslaved.

The three Edmonsons were slaves, and they were moving carefully toward the Potomac River, where a schooner from the North was waiting to take them on a journey to freedom. They were leaving behind an unusually close, highly spiritual, and even modestly prosperous family. Their parents, Paul and Amelia, lived on a forty-acre farm about fifteen miles north of the city in Norbeck, Maryland, a small rural crossroads in Montgomery County. Thirteen years earlier, shortly before Christmas 1835, Paul Edmonson, a free man of color, purchased his first twenty acres of farmland for $250. In 1847 he doubled the size of his farm with the purchase of an additional contiguous twenty acres of land for $280.