A Love Letter to the Greatest Teen Magazine of All Time

by Kara Jesella and Marisa Meltzer

The story of the rise and fall of the popular teen magazine draws on interviews with the periodical's staff to describe its frank coverage of taboo subjects, its battles with critics, and its lasting influence.

NPR stories about How Sassy Changed My Life

To Girls, 'Sassy' Meant Something More

April 25, 2007 • Not every teen magazine was all about makeup and boys. To its readers, Sassy helped bring girl power to the mainstream. Writer Kara Jesella talks about the magazine's cult following and her new book, How Sassy Changed My Life.

Excerpt: How Sassy Changed My Life 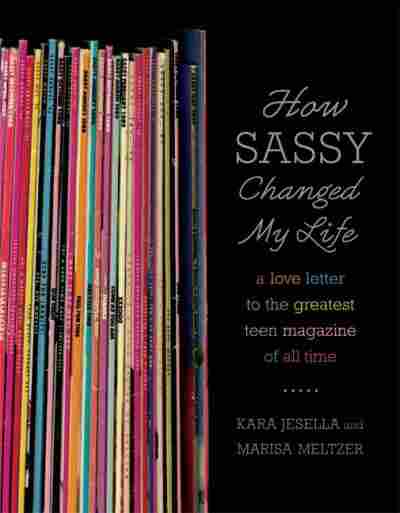 "Why would you write a book about a teen magazine?"

We've lost count of how many times we've been asked some version of that question since this project began.

Luckily, the floods of emails we got from people saying they couldn't wait until its publication and asking how they could help served as an excellent emotional buffer from the blank stares. Smart, cool women who grew up reading and loving Sassy offered to be interviewed; staff members and interns assured us they would let us know what really went on in the magazine's offices; celebrities who had special relationships with the publication--like Spike Jonze and Michael Stipe--wanted to pay their respects.

Because more than a decade after the publication's untimely and much-lamented demise, Sassy matters as much as it did when it was in print. Though Sassy was never able to match the advertising or circulation of the other teen magazine giants of its day, the magazine more than made up for this lack in terms of reader devotion.

Even now, it continues to incite cultlike dedication among its fans. Copies on eBay inspire heated bidding wars. ("Fifteen years later, a weird kind of muscle memory takes over when I finally get my vintage Sassy," said Rebecca L. Fox in a paper called "Sassy All Over Again" for NYU journalism school. "To my surprise, I read Sassy now the same way I read it in my teens--voraciously.") Magazines feature sentimental stories mourning it: "We Still Love Sassy" was the bittersweet title of an article that ran in The New York Review of Magazines. On the Internet, message boards and open love letters to the Sassy staff abound: "You gave us thirteen-year-old girls stuck in rural Wisconsin a glimmer of hope, a pinky-swear promise that the world could be a funny, smart, and even sexy place," wrote one Harvard student in the Crimson. "I loved Sassy so much, and needed it so much, and it was there for me," a Swarthmore student said on her Web site.

A 1997 article in Spin magazine's Girl Issue noted: "When the best teen magazine ever, Sassy, was sold to the owners of Teen magazine in 1994--and the entire New York-based staff was put out to pasture--readers went into revolt. Teen magazine exemplified everything that was wrong with America's youth, and Sassy was its antith-esis. Distraught teenagers tracked down staff members at home, calling with a simple question: Why?"

"Why?" is just one of the questions that this book will answer. How Sassy Changed My Life is the inside story of how and why the magazine came to be, what happened during its six short years of life, and the real reasons behind its demise. More important, it is a tribute to a monumentally significant cultural artifact that has been given short shrift.

Understanding Sassy's importance begins with a chronicle of the early days of the magazine and how it distinguished itself. Sassy's story is intricately tied to the societal transformations that occurred in the late eighties and early nineties. As teen-pregnancy rates soared, AIDS became a very real threat, and debates over what kids should be taught about sex in school raged, the magazine heralded a new way of thinking about girls and sexuality; we will discuss how this led to a battle with the religious right--then just becoming a force to be reckoned with--that almost put the magazine out of business.

To best explain the scope of Sassy's impact, and the major themes that characterized the magazine's middle years, it's key to bear in mind events that were happening simultaneously. At a time when the cultural mainstream and underground were two distinct entities, Sassy relentlessly covered indie celebrities and tenets of indie culture for the masses, while at the same time deconstructing pop tarts. As the victories of Second Wave feminism and the new ideas of the Third Wave crystallized, Sassy heralded a changing of the guard in the women's movement and brought a new version of feminism to high-school girls. And while teenagers who obsessed over 90210, lipstick, and just wanting to have fun had long been denigrated as silly and fluffy, the magazine made being a girl seem vital and important, creating a new kind of female persona--one that very much still exists today. In an era of political and economic flux--first a Republican president, then a Democrat; first a boom time for magazines, then a recession--Sassy struggled to maintain a resolutely progressive voice, which by its very nature couldn't last. "Every six or seven years something comes along that's just exactly right," says writer Blake Nelson. "Sassy was just exactly right." And its considerable legacy is no surprise. As we'll see, for readers, pining for Sassy is about more than revisiting another era.

Certain institutions link people together irre-vocably: a fifty-year-old Tri-Delt meets a twenty-five-year-old Tri-Delt and they are instant sisters; Sassy serves a similar purpose, but for a different psychographic. Julianne Shepherd thinks she got a former job as arts editor of the Portland Mercury, a weekly in Portland, Oregon, because "in the interview, I noted Sassy as a major influence on my inchoate writing voice, and the publisher, Tim Keck [who co-founded The Onion in 1988 when he was a junior at the University of Wisconsin], was essentially like, 'Right on! You're hired!' "

In other words, Sassy has become a kind of code. "I meet people now and occasionally ask them if they were Sassy readers," says fan Catherine Bowers. Upon meeting a fellow Sassy fan, we feel like we understand something essential about that person: their life philosophy, what their politics might be like, what their artistic preferences are, what they were like in high school, what kind of person they wanted to grow up to be. (By contrast, we find non-fans of a certain age slightly suspect.) We seem to recognize kindred spirits even now. "A lot of us Sassy-ites found each other," says fan Lara Zeises. None of her friends read it in high school, she says, "but most of my friends now were of the Sassy generation, and it's like we have this special bond because of it."

It's faith in that "special bond" that enabled us to decide to write a book about Sassy together about half an hour--tops--after we met.

To explain: "I really think Sassy changed my life," said Marisa, over drinks. We were discussing a story she was going to write for the teen magazine Kara worked for at the time.

"I know!" Kara agreed. "I don't understand why no one has ever written a book about it."

We talked about how much we would love it if there was a Sassy tribute book, something that would tell Sassy's unusual story and explore the ways in which it affected thousands of girls like us--not to mention its legions of non-girl fans.

"We should write it," said Marisa. We started immediately. Although we didn't know anything more about each other than that we were both feminists and writers with an interest in teen magazines, we were pretty sure that our shared love of Sassy meant that we were going to be similar in other ways as well.

And we were right. Sassy aficionados have always been a self-selecting group, people who wanted to establish a chosen community. "As someone who felt 'different' from a lot of other girls in my peer group, it was extremely validating to know that I was not alone in the way I thought or the types of things that I thought about," says fan Amelia Davis. Sassy still manages to function in this way, connecting people to one another. And while there were plenty of reasons for us to want to work on this book, the thought of meeting fellow Sassy fans, the friends we wished we would have had in high school, became increasingly exciting. It's embarrassing and kind of geeky--the idea that, as adults, we still believed that people who read Sassy would be like us, would have similar values and interests, and that, long after high school, finding these people would somehow still be transformative and fun and important.