When Attention Fails and Memory Fades in Midlife

An investigation into the process of how memory and attention change in middle age, and offers insight into the physiological, psychological, and sociological factors that contribute to midlife forgetfulness.

NPR stories about Carved in Sand

An Author on Her Fight Against Forgetfulness

April 18, 2007 • When author Cathryn Jakobson Ramin started to lose her mental edge, she fought back. She talks about her book Carved in Sand: When Attention Fails and Memory Fades in Midlife. 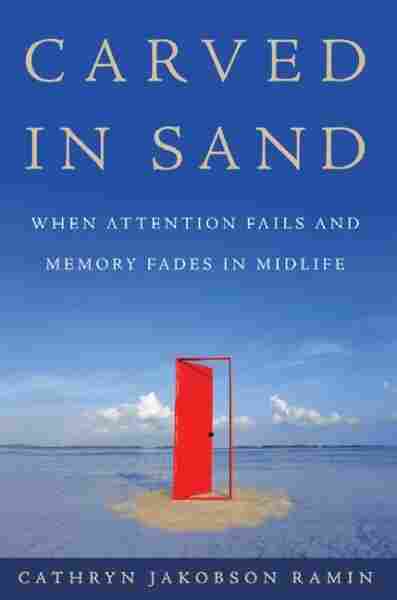 When Attention Fails and Memory Fades in Midlife

Midlife Forgetfulness Is Embarrassing and Frustrating, but What Does It Mean for the Future?

On the drive from the suburbs to the city, we'd experienced a disturbing number of memory lapses. Actually, the first bout with forgetfulness had occurred earlier that afternoon, when our friend Sam, who was three hours away in Reno judging a barbecue contest, forgot that we had dinner plans. After a not-so-gentle phone reminder from his wife, he made the drive home in record time, still carrying a whiff of slow-smoked baby back ribs on his person. That mistake was in the past, but other canyons loomed before us. Where was our restaurant, again? (I had printed out the address, as I'd promised-and left it on the kitchen counter.) Had my husband made the reservation for seven, or seven-fifteen? Which way did Post Street go? Was the nearest parking lot on the corner, or midway up the block? I made the error of mentioning that the little bistro we'd chosen had a great young chef, fresh out of the kitchen of some hotshot who had a restaurant in the Napa Valley, and another in Los Angeles. Or maybe it was Las Vegas. I'd read about it somewhere.

That's what set my husband off.

"Oh, I know exactly who you mean," he said, ready to educate us. Then, he drew a blank. I watched him become increasingly preoccupied as he explored every shadowy cognitive pathway, searching for the name he was after.

I whispered that he ought to give it a rest-he'd think of it later.

"But it's driving me crazy," he said.

An hour into this hard-earned evening out with friends, more information was missing than present. Among our peers, this state of affairs was so common I'd started to call it "the content-less conversation." When the words "Ken Frank, La Toque, Fenix-and that is in L.A." finally tumbled from his lips, we cheered. We could move on to other things, like whether any of us had ever tasted the nice bottle of wine we were ordering, and if we had, whether we'd liked it. Maybe we'd only heard about it. Or read about it. Or seen it on the supermarket shelf. No one could say for sure.

"I guess this is normal," Julia sighed, "but I swear, no one we know can remember a thing."

"It may be normal," Sam said darkly, "but it isn't acceptable. Maybe forty years ago, when life was slower and you could depend on a pension and a gold watch for thirty years of dedicated service, it would have been okay."

He was right: What was making us nuts hadn't flustered our parents in their forties and fifties. But their lives were different, and so were their expectations. They weren't changing careers or inventing new ones. At the age of fifty-two, they definitely weren't trying to remember to show up for back-to-school night for three kids at two different schools.

Nearly every time the subject of forgetfulness arose, people asked me if what they were experiencing was "normal." If they defined that word as the dictionary does-"conforming with, adhering to, or constituting a norm, standard, pattern, level or type," the answer was yes-perfectly.

Everybody asked, but in truth, few people were content with the implications of "normal." What they really wanted to know was whether they were just a little (or a lot) better off than their peers. This was important: If they slipped below the mean, chances were good that they would not be able to keep up.

What was normal had changed considerably over the centuries: Two hundred years ago, if we aged "normally"-that is, according to our biological destiny-forgetfulness wouldn't be an issue at forty-five or fifty: Most of us would be in our graves. Medicine constantly redefines what is normal in terms of physiological aging. We get new knees and new hips. We take drugs to control our blood pressure. We don't give up reading when our fading vision demands that we hold the newspaper at arm's length. Instead, we build ourselves an arsenal of reading glasses and scatter them all over the house and office, in case we forget where they are. When the New York Times Magazine began to run a Sunday cartoon series with wording in a font so small that I couldn't manage it even while wearing my reading glasses, I suffered no damage to my self-esteem. And yet, when it comes to what scientists call "age-associated cognitive impairment," we take it personally and refuse to do anything about it, mostly because we're not sure what we can do.

This sheeplike complacency occurs because the brain is our most intimidating organ. Your brain, with you from the start, has demanded remarkably little attention. Like me, you've probably spent more time worrying about the condition of your abdominal muscles. We assume that what is going on in there is as mysterious as the universe, involving such concepts as consciousness, being and soul, surely best left to the philosophers and the clerics. Here's the news: From a purely biochemical perspective, your brain-a three-pound bolus of fat, with the texture of lightly scrambled eggs-is essentially the same organ a rat is carrying around on its shoulders. As a result of your genetic inheritance, certain aspects of how your brain will age are already inscribed in the Book of You, but it's written in pencil, and you have an eraser. Recent studies of pairs of elderly identical twins, only one of whom developed Alzheimer's disease, show that genetics, although influential, aren't everything. As you will see, you can indeed influence the way your brain ages, through diet, physical and mental exercise, and assuming you've done all you can in those departments, by taking advantage of the increasing availability of pharmaceuticals intended to enhance cognition.

Say it to yourself: "Normal, but not acceptable." And, from what the senior scientists tell me, definitely mutable, subject to the quality of your resolve.