The failure of America's medical system, as seen through the stories of the people who engineered the current health care revolution and those who have suffered from it. Every day, millions of Americans find themselves struggling to find affordable medical care for themselves and their families. It is a problem unique to the United States, the only country in the developed world that does not guarantee access to medical care as a right of citizenship. It is also a problem that is about to get worse. The American health insurance system, first created in the 1930s, is collapsing. Unless somebody decides to build a new system in its place, millions more Americans will suffer. Combining the real-life stories of ordinary people across the country with original reporting from Washington, this book explains why this transformation is taking place—and the consequences that could someday befall all of us.—From publisher description..

April 11, 2007 • In Sick: The Untold Story of America's Health Care Crisis — and the People Who Pay the Price, author Jonathan Cohn looks at case studies of patients struggling with the U.S. health-care system to explain why a profit-based model means some people don't get the care they need. Cohn, a senior editor at The New Republic, advocates a government-regulated single-payer system. 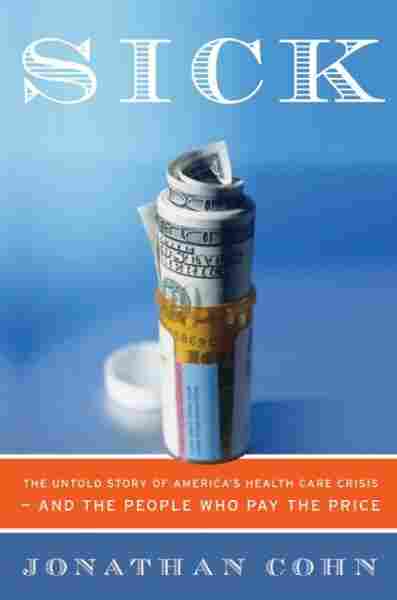 New York's Leatherstocking Country sits at the northern foothills of the Catskill Mountains, a few hours' drive from Manhattan. The name is a reference to the leggings that colonial settlers wore during the 1700s, but it was James Fenimore Cooper who immortalized the region in the early 1800s, when he used it as the setting for his five books about the frontier hero Natty Bumppo, a collection that later became known as the Leatherstocking Tales. To see the area today is to glimpse a landscape remarkably like the one that first captured Cooper's imagination: a "succession of hills and dales" rolling through the countryside; "beautiful and thriving villages" nestled in the "narrow, rich, and cultivated" valleys, with only the occasional gas station and roadside pizza shack to pierce the "romantic and picturesque character." For the people who live in Leatherstocking Country now, this largely unmolested geography provides precious insulation from the rest of New York-even, it would seem, from modernity itself.

Perhaps nowhere is this more evident than in the village of Gilbertsville. Gilbertsville is a two-hour drive from Syracuse, the closest city with a major airport, and the last part of the journey takes place along a winding road, more than 1,000 feet up in the hills. Gilbertsville becomes visible only after the final turn, when the road descends into a valley, depositing drivers near the entrance to Major's Inn-a Tudor-style building that hosts such events as the annual Gilbertsville Quilting Fair. Here Gilbertsville's commercial district begins and nearly ends, with a small grocery store, a quilt shop, and a few offices operating out of more Tudor-style storefronts that line one side of the street. The buildings look almost precisely as they did when they were built in the 1890s, after a fire destroyed the old business district. The effort to replicate a small English town was apparently the inspiration of Joseph T. Gilbert III, whose great-grandfather, Abijah Gilbert, helped settle the township in the 1780s after migrating from Great Britain.

Some of Abijah's direct descendants still live in Gilbertsville. In fact, say the locals, many of the 377 people that the 2000 U.S. Census placed in Gilbertsville have roots in the area that go back at least 100 years. More than surnames were handed down over the generations. The people in this part of New York have a long-standing reputation for hard work, conservative values, and attachment to the land-a reputation that still seems fitting today. The inhabitants attend church regularly and strongly prefer conservative politicians, electing mostly Republicans to the five-member village governing body. As for their awareness of their heritage, perhaps the most celebrated episode in Gilbertsville's modern past came in 1982, when its residents won a seventy-year fight to block construction of a proposed dam that would have flooded most of the village. They prevailed by methodically cataloging the architectural heritage of every local building, commercial and residential, then successfully lobbying to have the entire village placed on the National Register of Historic Places, forever protecting it from disturbance.

It was four years after that victory that Gary and Betsy Rotzler moved to Gilbertsville, fitting into the community fabric almost seamlessly. They'd grown up together in neighboring Delaware County. Although Betsy was born in the Bronx, Gary's Leatherstocking lineage went back a dozen generations, to its very earliest days as a settlement in the New World. (Family legend had it that one of Gary's ancestors came from Britain to the United States on the ship immediately following the Mayflower.) The long hair Gary wore during his adolescence was typical for boys in the 1960s and early 1970s, but in most other respects he and Betsy were remarkably traditional. They had become high school sweethearts after going on a date to the county fair in 1975, while Gary was a junior and Betsy still a freshman, then continued dating after Gary went to college upstate. On June 25, 1978, just one day after Betsy's graduation from high school, the two were married in a small ceremony held at the home of Betsy's parents. A year later they would have their first child, a daughter named Sarah. Two more would follow: another daughter, Amanda; and then a son, Luke.

The Rotzlers came from relatively modest roots: Gary's father was a diesel mechanic who worked for the local highway department; Betsy's parents ran a residential treatment center for alcoholics. But by the time the couple came to Gilbertsville, the Rotzlers had every reason to expect they were on their way to realizing the American dream. Gary was noted for being industrious, having missed not a single day of classes in college. Shortly after graduating, he began working at Bendix, a large aerospace manufacturing company-first as a design technician at a plant in the nearby town of Sidney, later as a field engineer managing the company's midwestern clients from Dallas, Texas. Another engineering job at the Bendix Sidney plant had lured the Rotzlers back to central New York-where they hoped to remain, for good. Betsy, for her part, had chosen to stay at home and raise the three children, getting involved primarily in activities that revolved around them, like the La Leche League for mothers who were breast-feeding and, later, the Girl Scouts. Around town, she would become known for her artistic flair, particularly the individualized Raggedy Ann-style dolls that were her trademark.

But the American dream would prove fleeting for the Rotzlers, just as it did for much of central New York in the early 1990s. The regional economy depended on defense manufacturing jobs, like Gary's, that vanished as Washington cut the Pentagon budget and a recession fell over most of the country. One by one, Gary's colleagues lost their jobs. In 1993, he lost his, too. And while Gary would find ways to replace some of his lost wages over the ensuing two years, he would have a much tougher time coming up with something else: health insurance. Like most working Americans, Gary had always depended on his employer to provide medical coverage; when the job was gone, so was his coverage. And even after Gary finally found full-time work, he still couldn't get insurance for his family, because his employer-a company for which he'd worked previously-was no longer providing benefits to many of its employees.