Letters of E. B. White

Letters of E. B. White

by E. B. White, Martha White and Allene White

Updated to include newly released letters written between 1976 and 1985, a thirtieth anniversary edition shares the New Yorker writer's and classic author's thoughts about such topics as the uncertainty of the future, his marriage, and his relationships with such colleagues as James Thurber, Groucho Marx, and John Updike. 15,000 first printing.

NPR stories about Letters of E. B. White

March 10, 2007 • Letters of E.B. White collects the correspondence of the writer and his family. His stepson, New Yorker editor and author Roger Angell, says the letters reveal more about a "modest" and "exacting" writer who "wanted to get things right."

Excerpt: Letters Of E. B. White 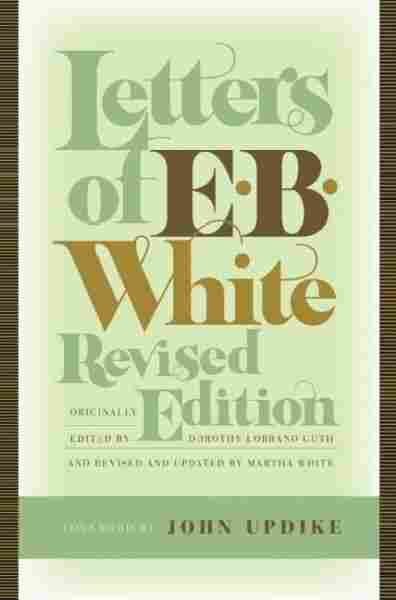 (Elwyn Brooks White was born in Mount Vernon, New York, on July 11, 1899, the youngest of the six children of Samuel and Jessie Hart White. Mount Vernon was a quiet, leafy suburb in the early years of the new century, and Elwyn, sometimes called "En," grew up in a child's paradise of backyards and skating ponds, bicycles and pets. He attended public schools, where he got good grades, and he did some writing for the Oracle, the high school paper. White himself can best supply the details and introduce the characters, and the following introduction is, therefore, in his own words.-Ed.)

If an unhappy childhood is indispensable for a writer, I am ill-equipped: I missed out on all that and was neither deprived nor unloved. It would be inaccurate, however, to say that my childhood was untroubled. The normal fears and worries of every child were in me developed to a high degree; every day was an awesome prospect. I was uneasy about practically everything: the uncertainty of the future, the dark of the attic, the panoply and discipline of school, the transitoriness of life, the mystery of the church and of God, the frailty of the body, the sadness of afternoon, the shadow of sex, the distant challenge of love and marriage, the far-off problem of a livelihood. I brooded about them all, lived with them day by day. Being the youngest in a large family, I was usually in a crowd but often felt lonely and removed. I took to writing early, to assuage my uneasiness and collect my thoughts, and I was a busy writer long before I went into long pants.

Our big house at 101 Summit Avenue was my castle. From it I emerged to do battle, and into it I retreated when I was frightened or in trouble. The house even had the appearance of a fortress, with its octagonal tower room for sighting the enemy and its second-story porches for gun emplacements. Just inside the massive front door was the oak hatrack, next to the umbrella stand. On the left the parlor, where the action was; on the right the "reception room," where no one was ever received but where I found my mother one day stretched out on the settee, recovering from an accident with a runaway horse. I thought she was dead.

I remember the cellar, its darkness and dampness, its set tubs, its Early American water closet for the help, its coal furnace that often tried to asphyxiate us all, and the early sound of the Italian furnace man who crept in at dawn and shook the thing down. As a very small boy, I used to repair to the cellar, where I would pee in the coal bin-for variety. Out back was the stable, where I spent countless hours hobnobbing with James Bridges, the coachman, watching him polish harness and wash carriages.

My father, Samuel Tilly White, was born in Brooklyn, the son of a carpenter and the grandson of a contractor. I don't know a great deal about my father's upbringing and home life. I don't think there was much money there, and there may have been some rough times. My father was, all his life, a sober and abstemious man, but I'm not sure his father was. His mother, Mary Ann Elizabeth Tilly, was an admirable woman. She came of "landed Gentry" in England but was deprived of her share of her father's estate because she married a tradesman. At any rate, young Samuel, my father (he always wrote his name "Sam'l"), felt obliged to quit school at thirteen and go to work. He found a job as "bundle boy" (wrapping packages) with the piano firm of Horace Waters & Company, at 134 Fifth Avenue, Manhattan. This company had a factory in Harlem, where the cases for uprights, squares, and baby grands were manufactured by a crew of beer-drinking Germans, skilled artisans. The actions (keyboard, hammers, dampers, etc.) were bought from a company that specialized in that and were installed at the Horace Waters factory.

Sam White not only wrapped bundles for his employer, he began pulling at his own bootstraps. He informed himself about every aspect of the business, learned bookkeeping, learned to play the piano, kept his eyes and ears open, and was soon climbing life's ladder. He was successively a clerk, a salesman, a branch manager (there were two or three retail stores scattered about the city), an officer of the company, finally president. When I was a child, I used to watch parades from a front-row seat next to the big plate glass window on the second floor of 134 Fifth Avenue-a splendid vantage point. I was "Mr. White's boy," marked for the special treatment. I made many visits to 134 and remember particularly the wonderful sad sound of a piano being tuned somewhere in the building.

Old Horace Waters, who founded the company, was an active temperance man. This may have had some effect on Father's life-I don't know. I do know that he spent most of his life as a teetotaler; only near the end did he occasionally treat himself to a glass of wine. He was a man of great probity, scrupulously honest and fair, a wing-collar, starched-cuff man, whose speech was never blurred by obscenities or profanities. He had a sentimental turn of mind, which led him into songwriting, and two or three of his compositions were published in the form of sheet music. But essentially he was a man of affairs, of business. He was what we call "well to do," a moderately successful businessman who ran both his company and his private life with caution and thrift. Over the years he accumulated enough money to build a house in Mount Vernon in the district called Chester Hill, which was classy. I have no idea how he met Mother. Their backgrounds were quite different. Father was forty-five years old when I was born; Mother was forty-one. So my parents and I were separated by almost two generations. I never knew my grandparents-they were all either dead or dying when I came along.